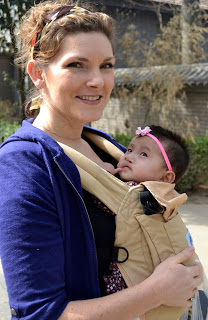 Getting to know Rosie: 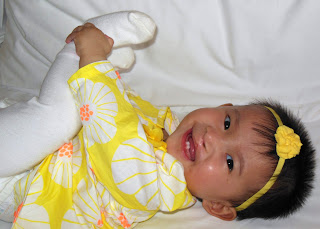 After having Rosalie placed in our arms, we spent the rest of the trip getting to know her, trying to figure out her preferences and enjoying her sweet temperment. We struggled with getting her to eat the first few days, which is worrisome in a 12 lb baby. Because she is so young, I thought she would absorb the change and transition seamlessly, and overall she has, but I think her refusing to eat was just a byproduct of all that was going on in her life. I had to step back and realize that, aside from having surgery in a hospital, she had never been outside of her orphanage, not to play, not to look at the sky or the trees, and she had spent most of her life on her back in her crib.  Now here we are, two very strange looking people, galavanting around a city of 10 million people, holding her all the time and showering her with attention. Predictability is comforting and even a change for the better can be difficult. However, each day her eating has improved and she has always slept very soundly. She remains as sweet as the day we got her. Everywhere we went, I wore her turned in towards me in my Ergo carrier.  She constantly stared up at my face, gazed into my eyes, and we bonded very quickly. She likes Caleb as well, but if she is upset, she will reach for me, which makes my mama-heart smile.  If Caleb or I are holding her on our laps, she will occasionally look up to see who’s got her and then check to see where her other person is.  She loves to smile and she cooed and laughed at all the buses and trees and lights that caught her eye as we walked about.  Every morning I would peek into her crib to get her up and say, “It’s still us!”  And so it will be, always. 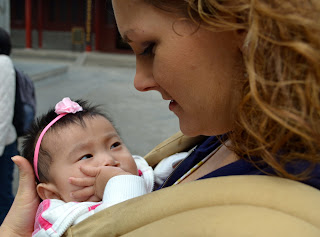 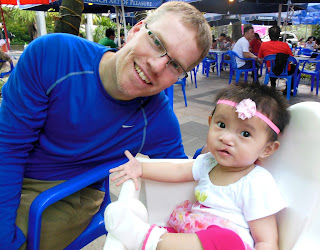 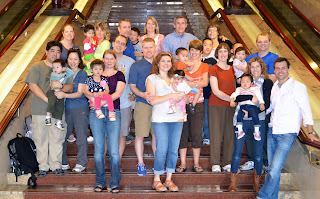 The greatest joy, aside from bringing home Rosalie, was getting to know the other families who were in China with us. There were ten  families with our agency, Holt International, but we also met several families from other agencies as well.  Families came from states all over the country, were of varying ages and all had different reasons for adopting. A few were like us, adding children to their families after having biological children, a few had adopted before, and several were becoming parents for the first time. 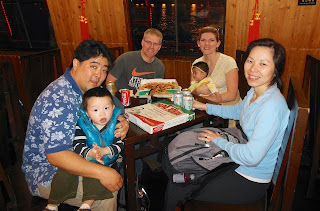 The dear couple (right) we traveled with the whole two weeks (their son was in the same province as Rosalie) were in their mid 40s and were just realizing their dream of becoming parents.  (Yes, we’re eating Papa John’s and after two weeks of Chinese food, it was SO good!)

I must share with you this most inspiring story: Kathy and Skip have five grown children and must be at least 60.  Their grown daughter is adopting from China and Kathy was (in her own words) trying to run her daughter’s life by finding a child for her on the waiting children list. She saw two 11 year-old foster brothers who had to be adopted together and she said to Skip on a Friday, “I think we should adopt these boys.  You have until Sunday to decide”.  And he agreed. (This couple is hilarious!) The boys have been foster brothers for seven years and both have repaired cleft lip and palate.  However, one of the boy’s repair was so poorly done that he can’t speak.  These boys will be released to a bleak future at the age of 16 and are nearing the point of becoming un-adoptable. However, they are very attached to their foster mom and Skip and Kathy came to China knowing that the boys may decide at the last minute that they didn’t want to return to the U.S. with them. 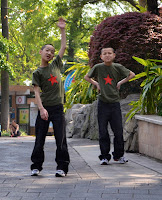 But that didn’t happen. And we got to watch their blossoming relationship for a whole week.  Apparently, 11 year old boys are energetic and squirely in any culture and it delighted our hearts (and we had many chuckles) watching these new parents corral and wrangle these very active and enthusiastic boys who spoke little English, but were so very excited to be beginning a new life.  I can’t wait to watch their stories unfold! And I pray that I might know such selflessness as Skip and Kathy are showing at an age where it would be very easy for them to justify not taking this challenge on.

I have spent just about zero words on the logistics of this process because to me, that is so unimportant  (in the big picture) and I know I only have your attention for so long 🙂  Yet, there was paperwork, document signings, paperwork, exchange of funds, passports, paperwork, visas, medical exams and oath taking ceremonies. And all of that while in China!  I won’t mention all that occurred in the six months before we were matched with Rosalie and the five months after.  I do want to say that I would use Holt International again in a heartbeat. Based out of Eugene, they have been working in China for 20 years and are very well respected.  They have 25 staff people in China and when a glitch occurred (and there were several –  our daughter not arriving, for instance) they were able to take care of things, using their relationships with government officials and their good reputation to keep things moving smoothly.  They partner with Lotus Travel who took care of all in-country flights, transportation, hotels and sight seeing and it really was like a vacation.

I can’t talk about logistics and not mention Caleb.  He truly allowed me to be the “new mommy”, taking care of all paperwork, documents, bottle making (tricky when you can’t drink the water – after much trial and error, he discovered the perfect ratio was 1 part boiled water to 3 parts room temperature bottled water), trips to 7-11 for said bottled water and dried sweet potatoes (I must find these in the U.S.), and all other matters of a practical nature.  I am so thankful for him and his servant heart.

And I need not say how worth it it all was.

Every good and perfect gift is from above,
coming down from the Father of the heavenly lights,
who does not change like shifting shadows.
James 1:17
Please follow and like us: