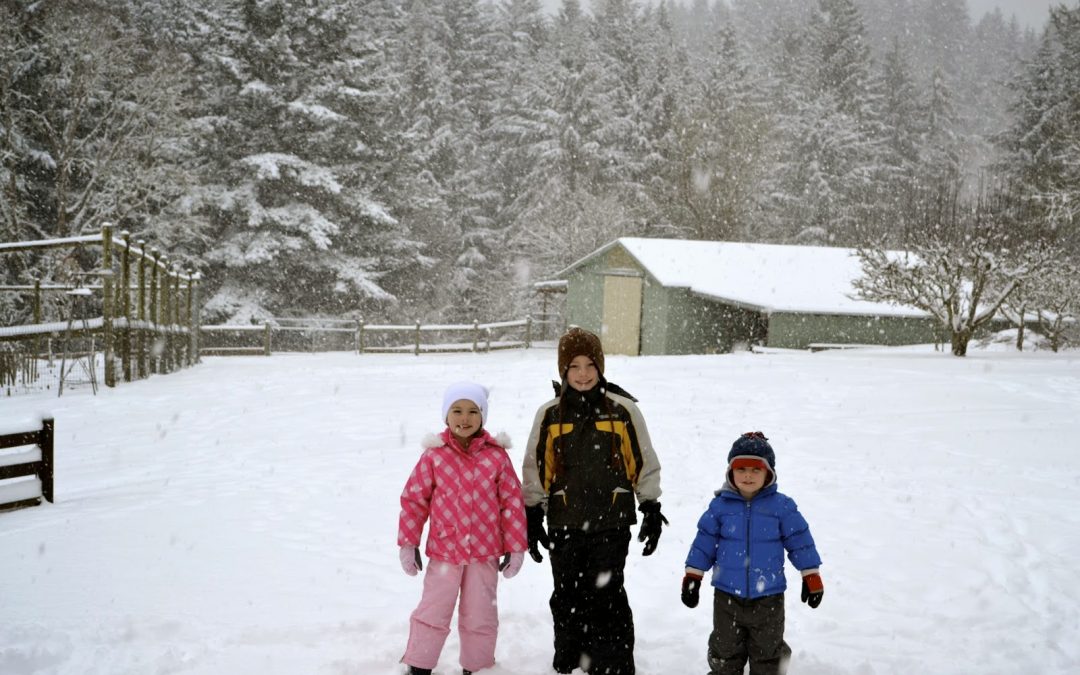 Winter is officially over. Happy Spring! We have spent the past two months enjoying a REAL snow, pruning our eight fruit trees, grapes and berry patch, weeding the garden for spring planting, wondering if we’re feeding our cows enough and if they are really pregnant, caring for twelve baby chicks and building the coop for them to move into in a few weeks, basking in the glorious warmth of Arizona, celebrating and reflecting on one year with Rosalie, and ringing in Elisabeth’s sixth year.

“I wonder if the snow loves the trees and fields,
that it kisses them so gently?
And then it covers them up snug,
you know, with a white quilt?
and perhaps it says ‘Go to sleep darlings,
till the summer comes again.’ “
~ Lewis Carroll, Through the Looking Glass

Caleb was in Chicago for three days and it dumped snow the entire time he was away. We had over a foot by the time he returned to us. It was spectacularly beautiful and we closed off one of the pastures  for sledding. Britton and I had to feed and water the cows twice a day (their water froze very quickly) and for the first time, we let them sleep in the barn. (Actually, we were feeding them from one of the stalls and they pushed their way in and wouldn’t leave.) The pipes in the barn burst and water gushed for 24 hours. Caleb tried to explain (from Chicago) where to turn it off, but the amount of knobs and pipes in this place is astounding. I was in the attic of the shop turning knobs like mad when actually the correct knob was in the basement of our house. These things are beyond me.  Times like this are when I solemnly tell Caleb, “Don’t ever die.” And I mean that for many, many reasons, but life’s logistics are certainly one of them. 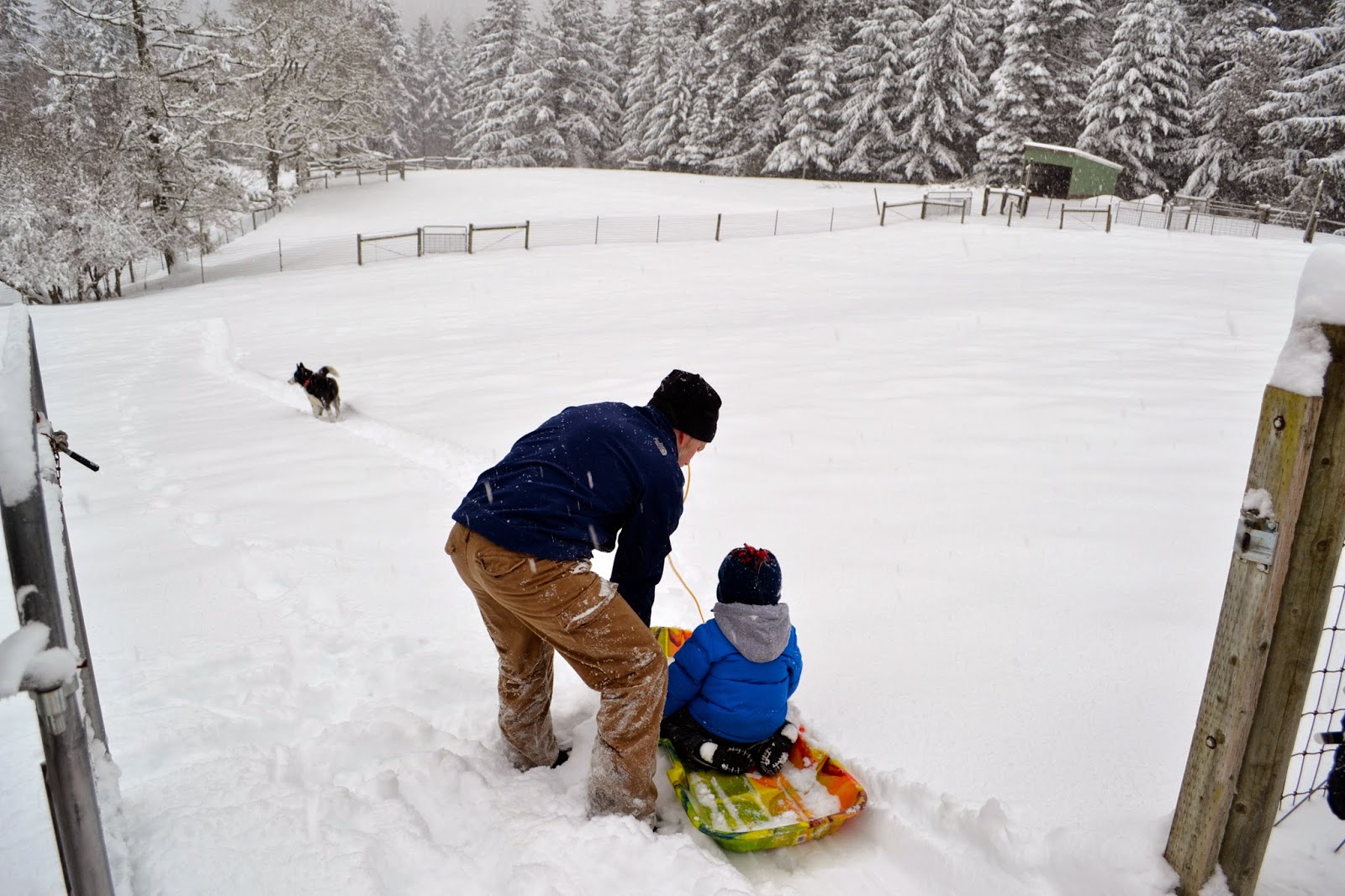 Cows
We have received a lot of conflicting information about our cows, and since we are ignorant on the subject, we are often confused. For example, the plan set up for us by the previous owners was that we should allow our cows to give birth, wean their calves after six months and then slaughter the moms and raise the babies. Sounds good, that’s what we’ll do. But then a “cow” person recently told us that the moms will be too old (nearly three) and not good for anything but hamburger. I don’t want 2000 pounds of hamburger. Hmmm… what should we do? Also, the previous owner said he rarely supplemented their grazing and that if you give them hay then that is all they want because they are lazy and being hand-fed hay is much easier than grazing. So we were occasionally giving them hay, but for the most part were just letting them graze. However, they were constantly yelling at us. Let me tell you, it is unsettling to be yelled at by a cow. They would even stalk me, standing outside the kitchen window and yelling at me as I did dishes. It did cause us to wonder if they were getting enough to eat. Thankfully, a kind neighbor (who we’ve never met) called to tell us that, pardon the intrusion, but he thinks our cows are too skinny. We were so thankful! Now we are feeding them more. (And they still yell at us some, but I think they’re mostly just being greedy.)

The other source of confusion lies in if the cows are really pregnant. Everyone made it sound like if the bull spends time with them, it is a done deal… of course they’re pregnant! I know in the human world that is not necessarily the case but apparently with cows matters are much more certain. So we proceeded on that assumption. Now six months later, we are left wondering. I have a strange glitch in my brain where I cannot tell if people have gained weight. Honestly, if you are my friend and you are packing it on, I will be oblivious. I will tell you you look great and I will mean it. This extends even to myself. I am clueless until I see an unfortunate picture of myself (this happened recently and we had a treadmill delivered yesterday – I’m on it!). It is the same with the cows – I can’t tell if they’re bigger. I’ve resorted to holding older pictures up to them in an attempt to distinguish any difference. So how do we find out definitively if they are pregnant?  I’ve googled it and the answer lies in a rubber glove and an arm disappearing up to the elbow. I think we’ll just wait and see…
March 4, 2014, Rosalie’s One-Year Forever Family Day 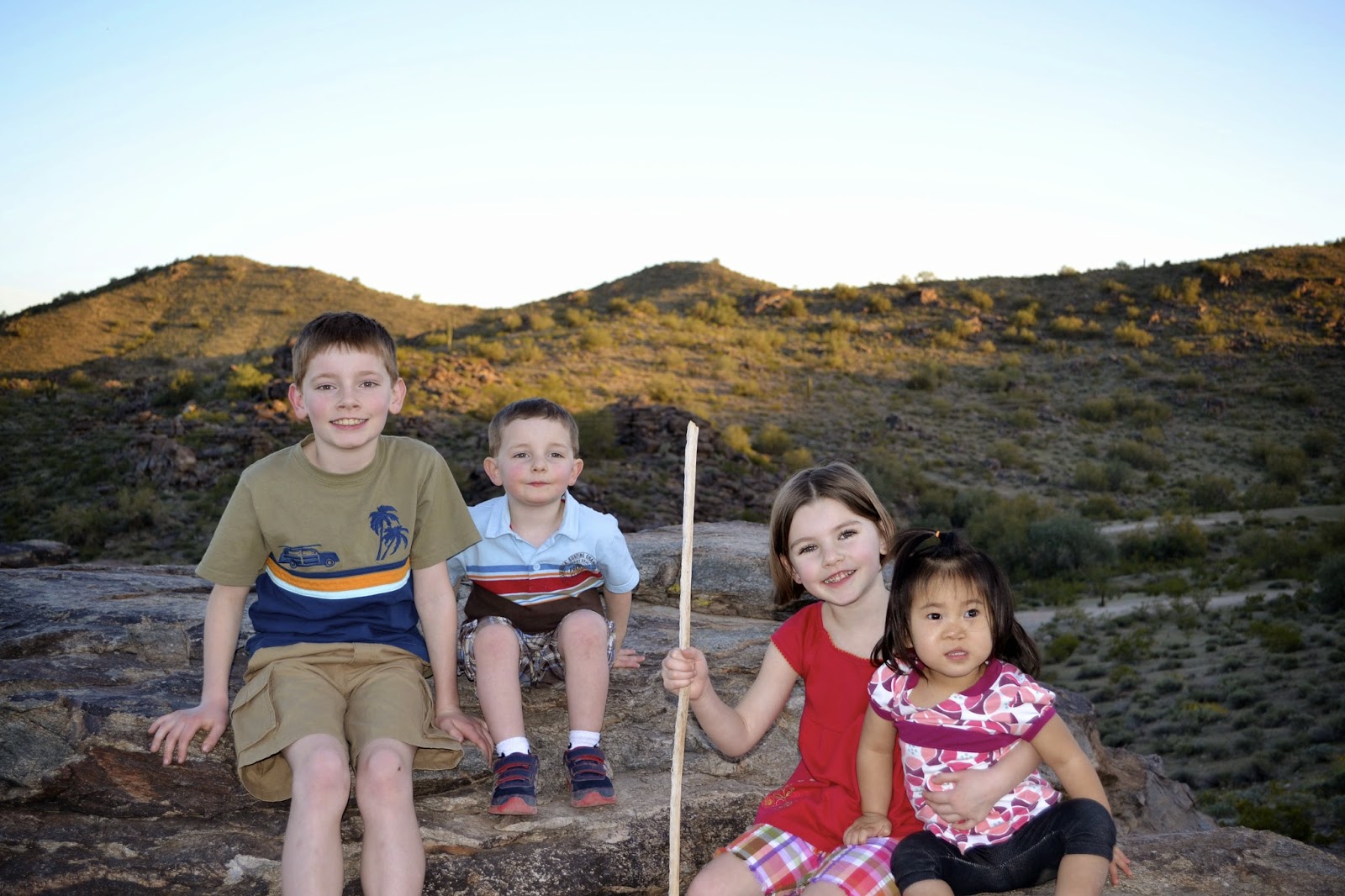 I began this blog to chronicle our adoption of Rosalie. Now the adoption is no longer “the” story but an interwoven part of the grander tapestry that is The Williams’ Story. She is one of us now and ours is one story.
A lady working at Home Depot recently said with a laugh,“She looks like she’s full of it!” I said, “How did you know???” And she totally is. This girl is spunky, strong-willed, observant, intelligent, and hilarious. I truly believe that her spunk enabled her to survive all that she went through in China. And now, one year later, at least twice a day I look at Rosalie in amazement and thank God that she is ours. I don’t do that with my other children,(though of course I love them and am so thankful for them). They came to us in such a normal and natural way that it doesn’t regularly inspire awe. But when I look at that sweet face, I see a miracle. I see the very Hand of God moving through time and space and circumstances to bring us together. I see Redemption and Grace and the way He cares for the individual. I see a Divine Plan for a life that once appeared bleak, Hope for a future that once appeared grim. I cannot wait to see how God is going to use her spunk for His glory. 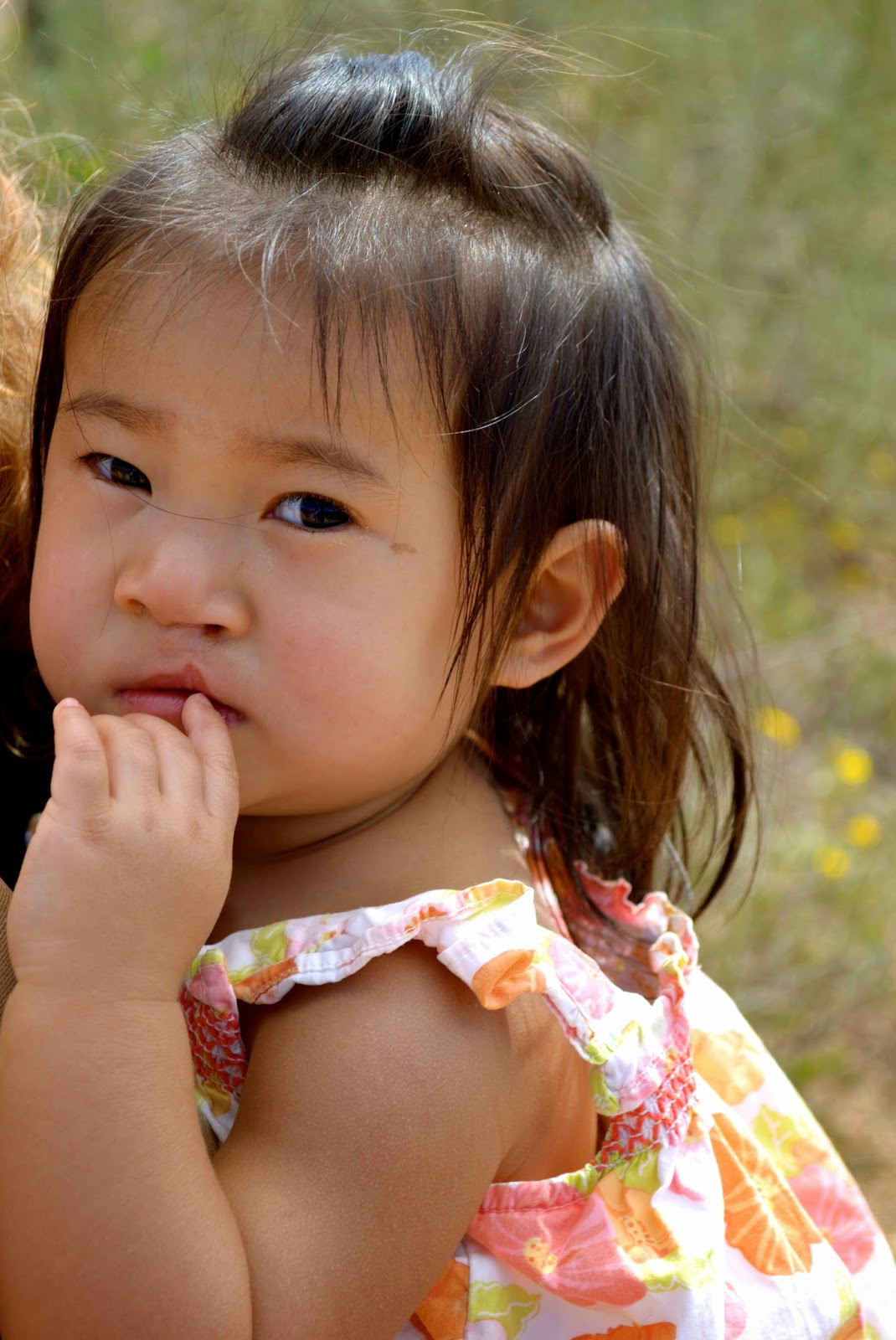