And Then There Were Goats… (Part II) 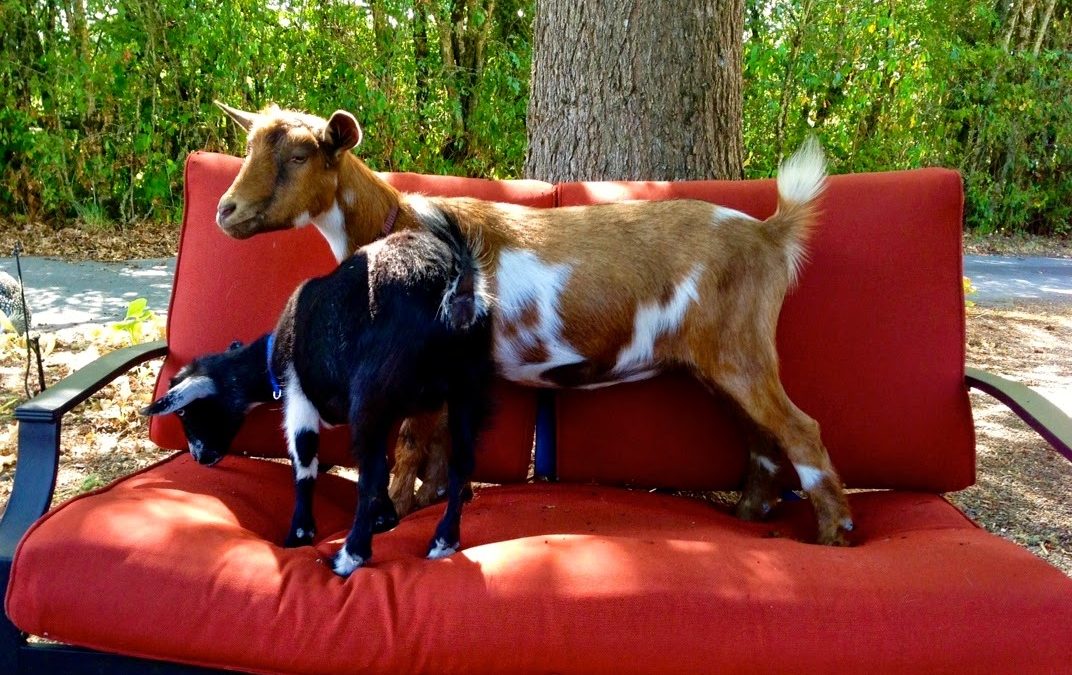 If you’re short of trouble, take a goat. 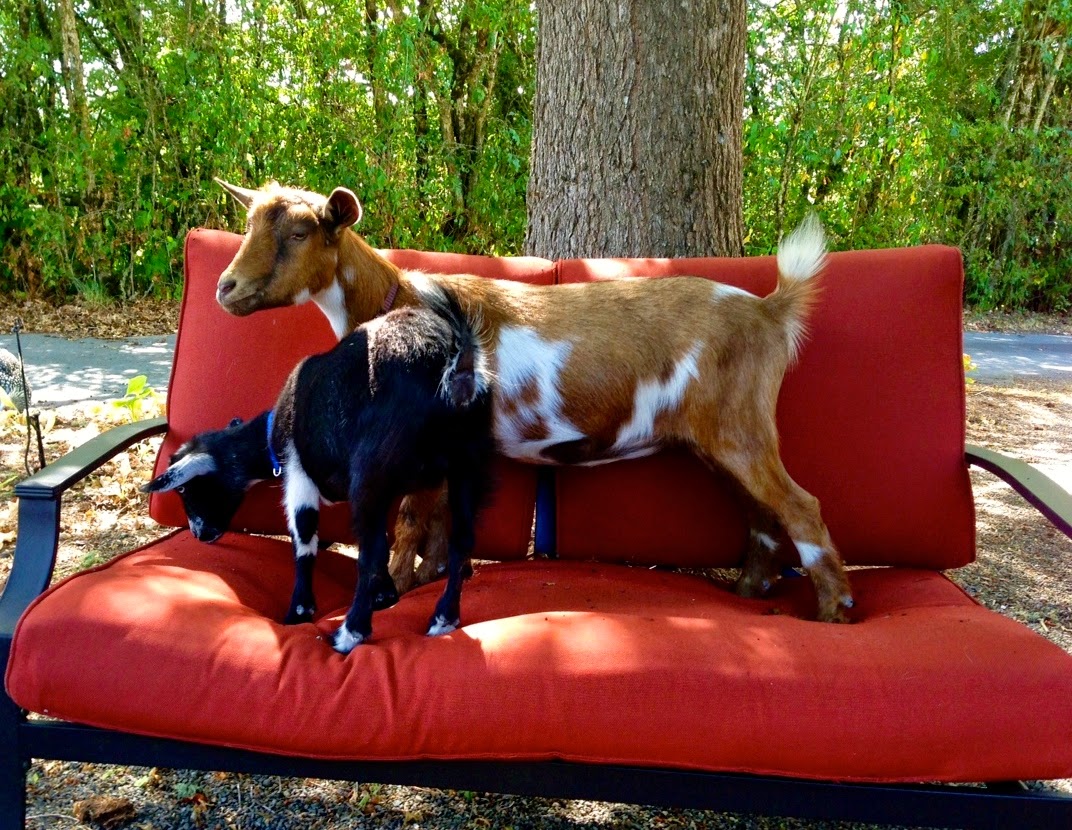 When we brought Elinor and Marianne home, we placed them in the pasture and expected them to start eating the vast variety of yummy weeds and shrubs and grasses thriving there. (Goats are browsers, preferring a sampling of many things rather than the focused grazing on grass of cows or sheep.) But they just stood at the fence and Meh-ed at us for days. And days. Since their previous owner did not have pasture for them, they were kept in a small pen and fed oats. We continued to do this for a few days but then decided we needed to starve them out and force them to browse. Even then, they mostly just stood at the fence, keeping a watchful eye for one of us to step outside so they could cry at us. They were pathetic.

Every evening we would let them out with us and they were our shadows. (Actually Elinor was our shadow and Marianne was Elinor’s shadow.) We strolled up and down our long gravel driveway while they nibbled on blackberry bushes and dried leaves, never leaving our side. If we had to step inside for a moment, this would be the view from inside (accompanied by very sad crying): 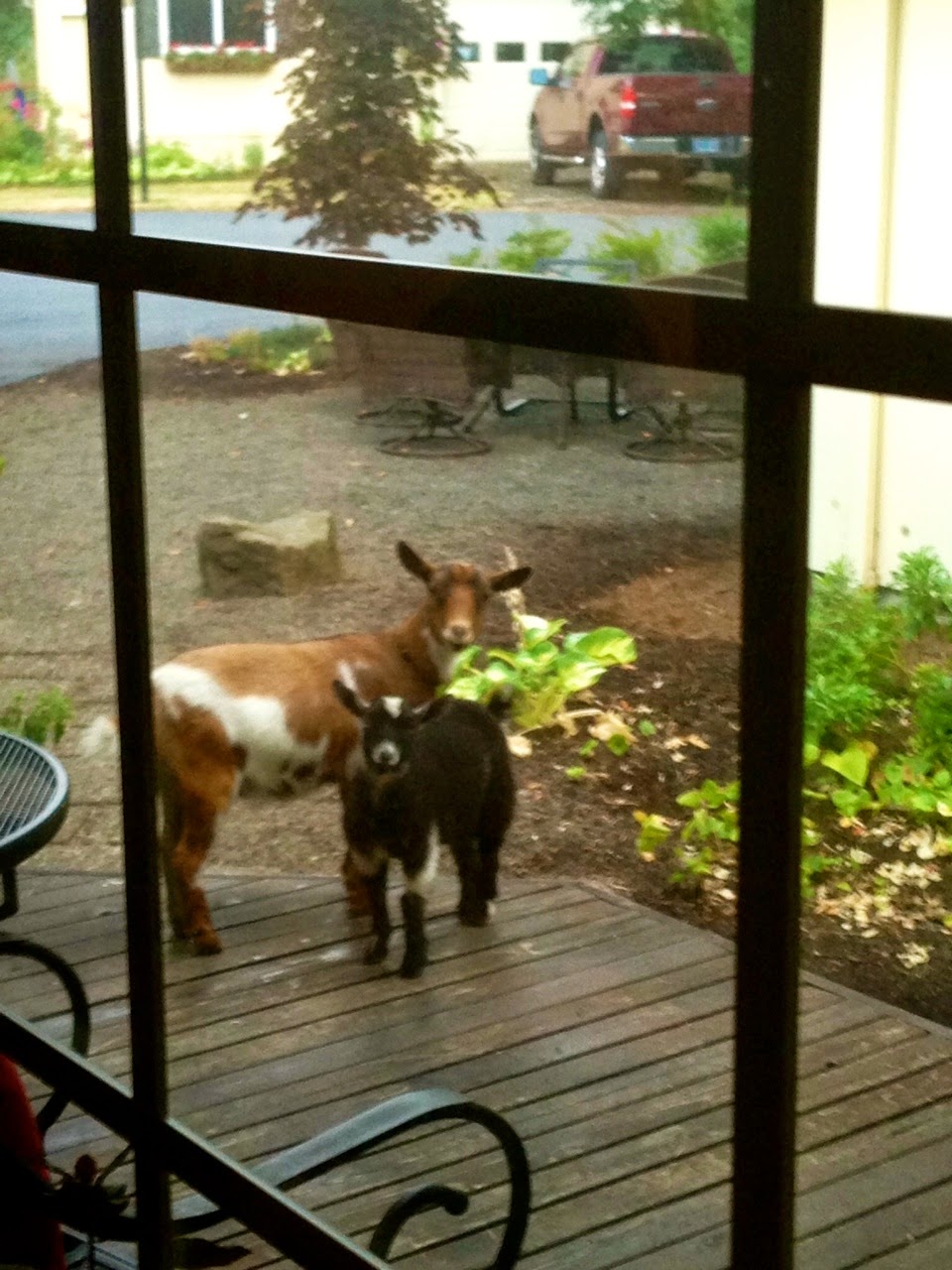 Feeding a goat is not as straight forward as other livestock. They need a mix of hay (second or third cutting alfalfa), goat-specific mineral supplement, and grain. Plus, they are subject to various ailments like bloat, which occurs if they eat wet grass, kidney stones, and lactic acidosis (grain overload) if their rumen PH falls below 5.5. (I’m not sure I even know what that means.) Plus, many common plants are toxic to them, including rhododendron and laurel (we have both) and tomato plants (which I totally would have thrown to them at the end of growing season, if I had not read this). All of this was stressing me out the first couple of weeks. Finally, we bought some Purina Goat Chow, which I’m sure is junk, but at least won’t kill them immediately, and we are purchasing some second cutting alfalfa for the winter.

They are definitely more comfortable now and venture out into the larger pastures to nibble on goodies, but still prefer to be fed (and if it comes directly from our hands, all the better.) They are more like dogs than farm animals, which took some getting used to, since we already have two dogs and I wasn’t really in the market for more. 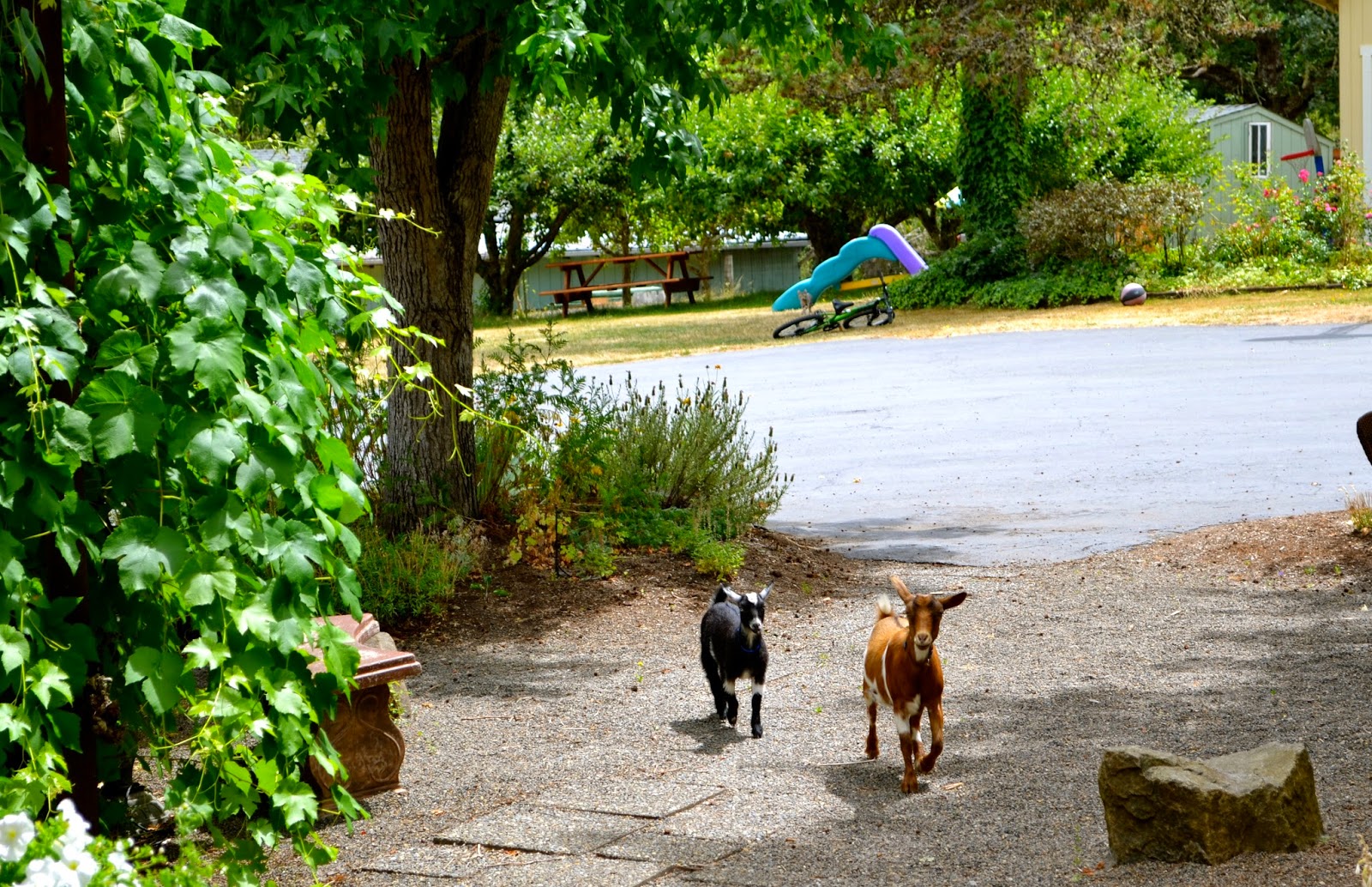 I have grown to love these creatures, but they are a handful. They used to gladly follow us back to the pasture when their time out with us was finished. Now, they’re too smart for that and I have literally had to drag Elinor the LONG distance down to the pasture while she dropped to her knees like a toddler who doesn’t want to go where she is being led. They force their way through the small chicken door into the coop (actually breaking it) and devour chicken feed (which can also be toxic to them). They mysteriously appear places with no indication of how they got in or out. They truly are endearing though. And they just want to be with us. Is that so wrong? 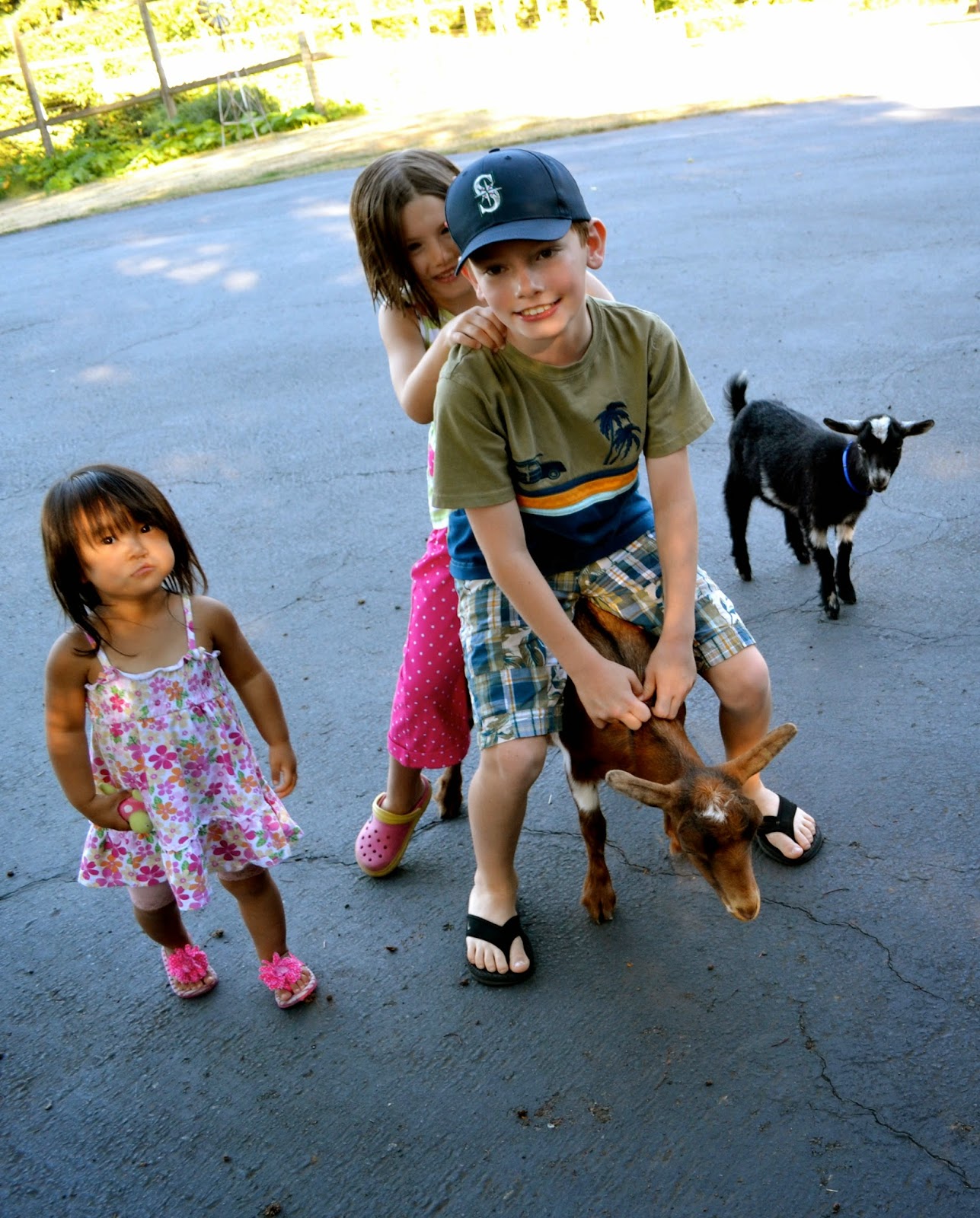 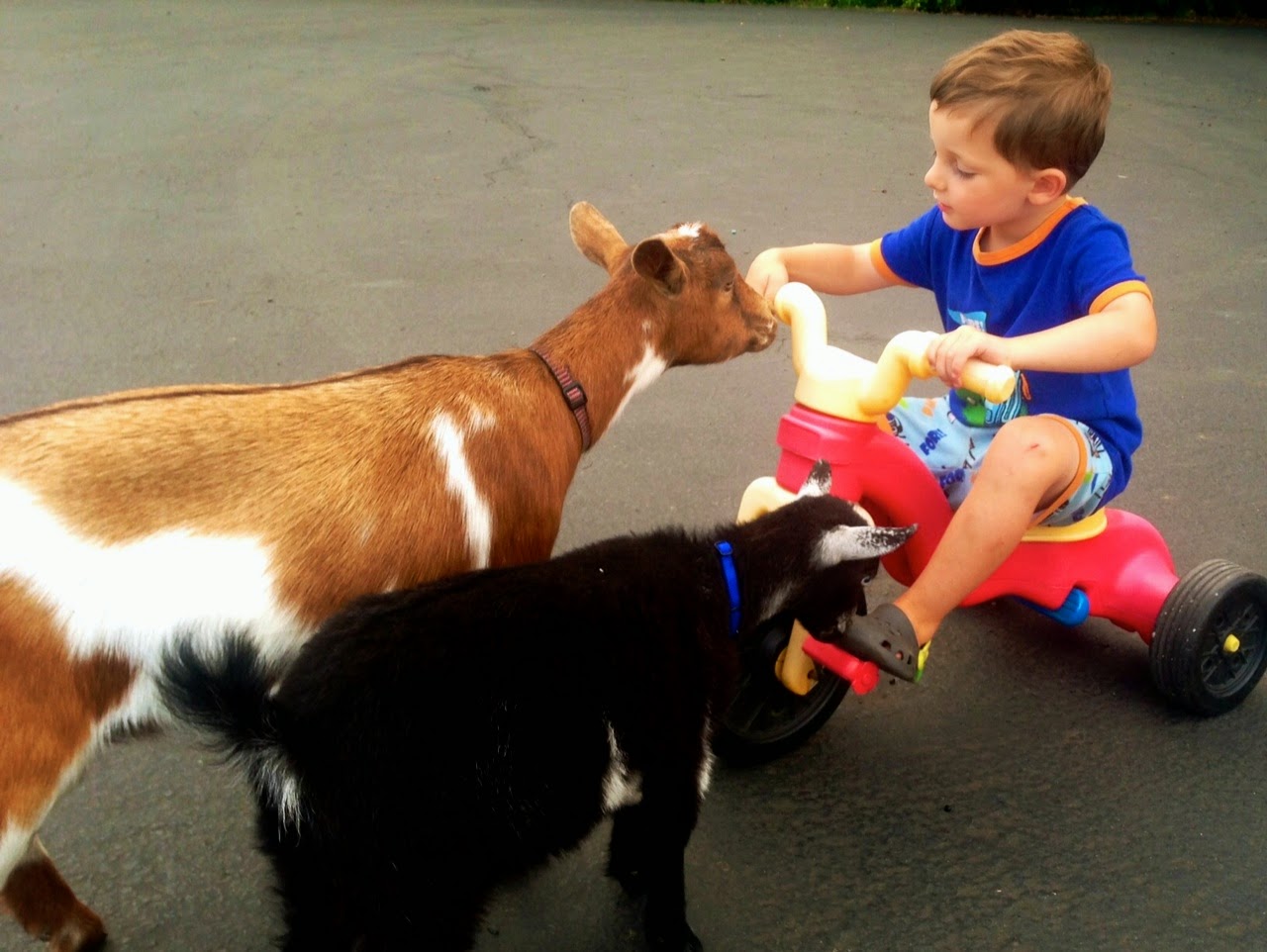 People ask us why we bought them. Are they working goats? Are they pets? We thought they would work on our weed and blackberry and poison oak problem, but they are so finicky and so small that they could eat every hour for the rest of their lives and really not make a dent. We would like to breed Elinor this fall or spring and sell some kids. (Shock of shocks: Caleb said he would like to keep one of the kids. I’m including that information here because after something is written on a blog, it’s irrevocable, right?) After breeding, Elinor will be in milk. I really would like to try milking her, but it is a huge commitment, as goats have to be milked twice a day, at 12 hours intervals. After gushing extensively about how convenient it was to spend a little more money and purchase the pre-sliced Tillamook cheddar from Costco, my dear husband gently suggested that maybe my zeal for pre-sliced cheese indicates that I am not quite ready to tackle home dairy. Touche. So let’s face it, they are pets, and we are okay with that. 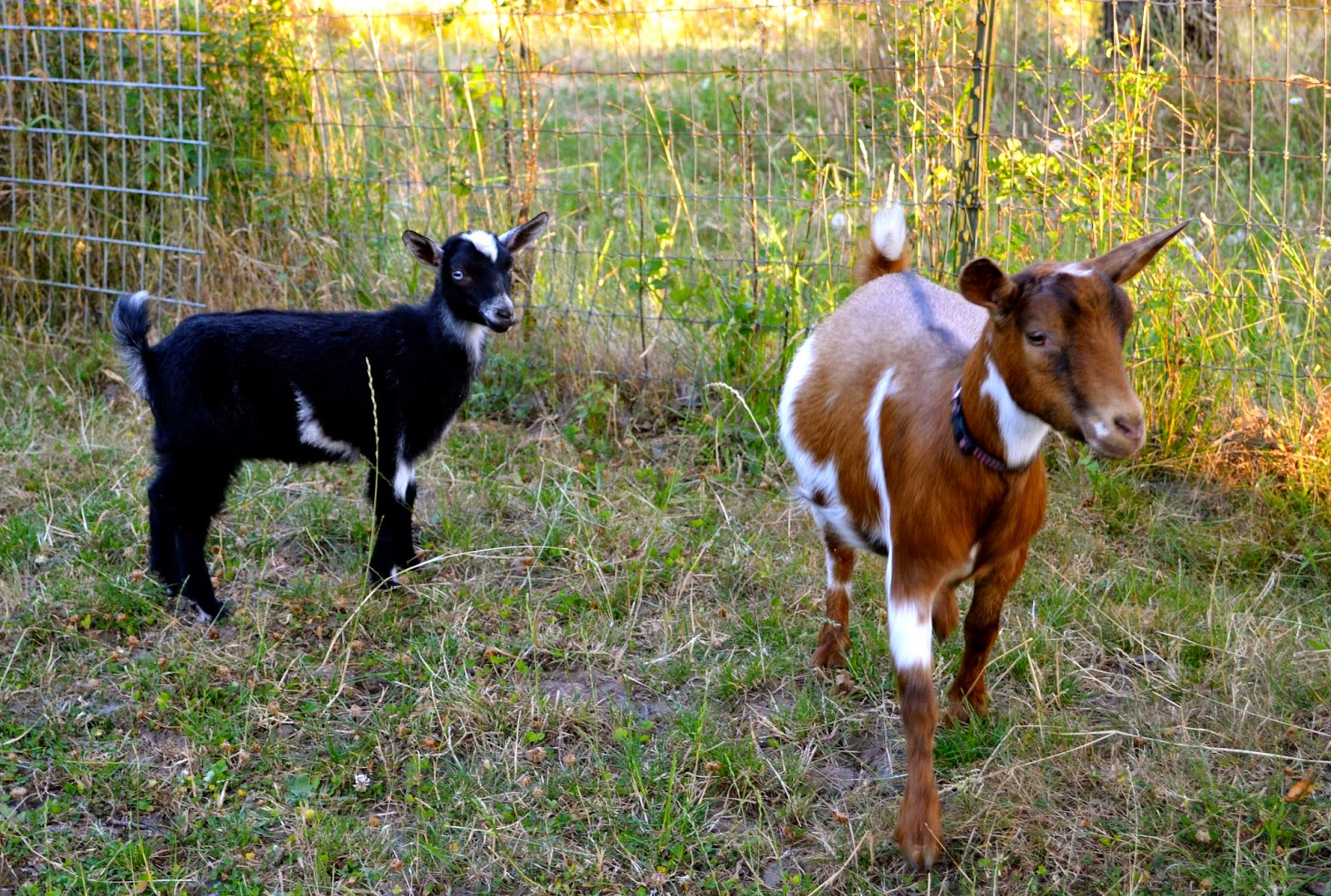