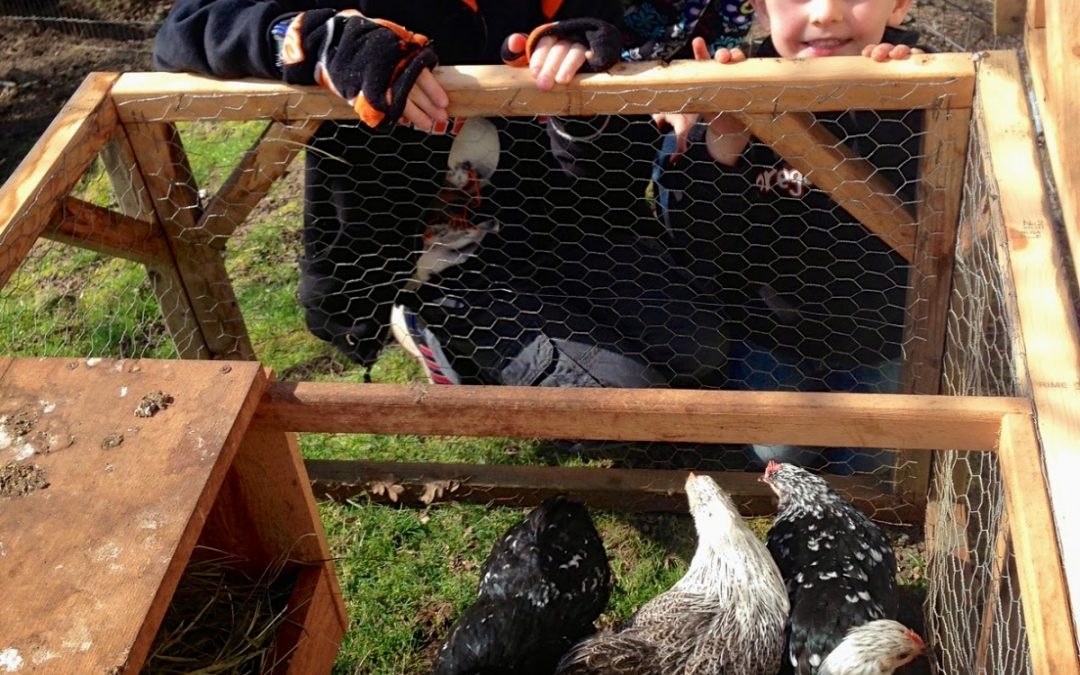 Winter Recovery
The past three months have been quiet on the farm. I suppose that is part of the purpose of Winter – to restore us and give us rest and ready us for the coming season of growth and activity and new life. The first seed catalog arrived in January and I could not even look at it. There was not yet enough distance between that exhilaratingly exhausting time last Summer and Autumn and its arrival. I stuck it on a shelf. By Mid-February the stack had grown to five different catalogs, we were experiencing weather in the mid 60s, and I was getting the itch. I began casually thumbing through them.

Fast-forward to the second week of April and I am longing to be planting, but my garden is not ready for me. Caleb has been completely re-laying the irrigation system. (I am continuously amazed at the breadth of skills my attorney husband has.) Parts of it was malfunctioning last year and I had to do a lot of hand-watering. While it is torn up, we decided to re-arrange the beds and re-organize the general layout. It pains me to pass by the pea starts and salad greens I keep seeing at the store. Hopefully within a couple of weeks the garden will be put back together and I can begin planting.

I’ve felt kind of proud of how we’ve become “animal people” the past year and a half. But in the back of my mind I’ve had this nagging notion that we haven’t really been tried yet. Everything has gone smoothly. Even our cows giving birth came off without a hitch. When our chicken got injured and was pecked to death by her flock-mates, we were on vacation and had a housesitter (my sweet niece who handled it so well), so we even escaped that. We lost one other chicken to a predator, but by the time I found her, she was quite a bit past needing any intervention by me. At some point I realized that we were completely ill-equipped to handle the injury or illness that would inevitably occur on a farm. I did not own a single piece of animal first-aid or medicine, which just seemed irresponsible. So I posted a question on the Oregon Homesteaders Chat Facebook page: What essential items would you include in a farm-animal first-aid kit? I received many responses, wrote them all down, cross-referenced to see which items came up the most often, and set about to track them down. I was able to find everything on Amazon, spending about $100, but I really feel like we have what we will need for most any circumstance. Our kit includes:

Now, if I will actually be able to treat my animals without passing out (I have serious blood issues, and I am not exaggerating), that will be a miracle.

Not a Big Deal
Since we got our goats last July, the task of trimming their hooves has hung heavily over us. It seemed intimidating and dangerous  (for them) and we put if off for months. I spoke to a dad at our homeschool co-op who is a serious DIYer when it comes to animals. He hunts elk and traps beavers and butchers animals himself. But he said he would hire out trimming goat hooves in a heartbeat. Caleb, however, was adamant that we needed to do it, at least the first time, ourselves. The task is supposed to be done every two months and we had put it off for six. It was time. We purchased a pair of $14 clippers from Amazon (they received great reviews) and watched a particular Ohio State University Youtube video several times and felt as ready as we would ever feel. The ideal set-up would be a milking stand where the goat’s neck is constrained, but since we did not have that, we gerry-rigged a rope contraption and fed them oats (a rare treat) to distract them. 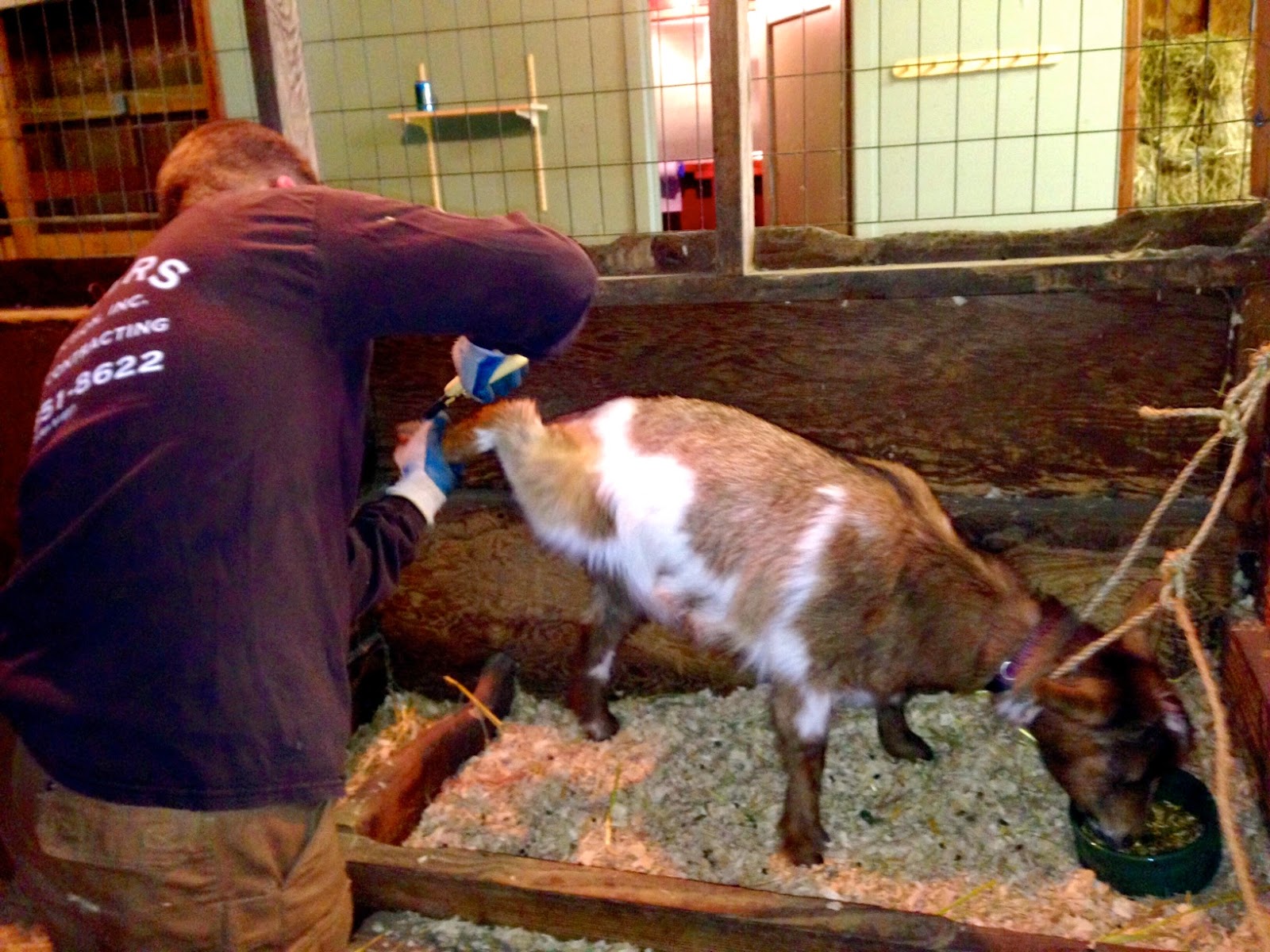 Elinor and Marianne were slightly agitated, but mostly because they were not near each other. (They are extremely bonded and cry continuously if away from each other.) It really was easy to see where the hooves needed to be trimmed and the job was accomplished with little drama. 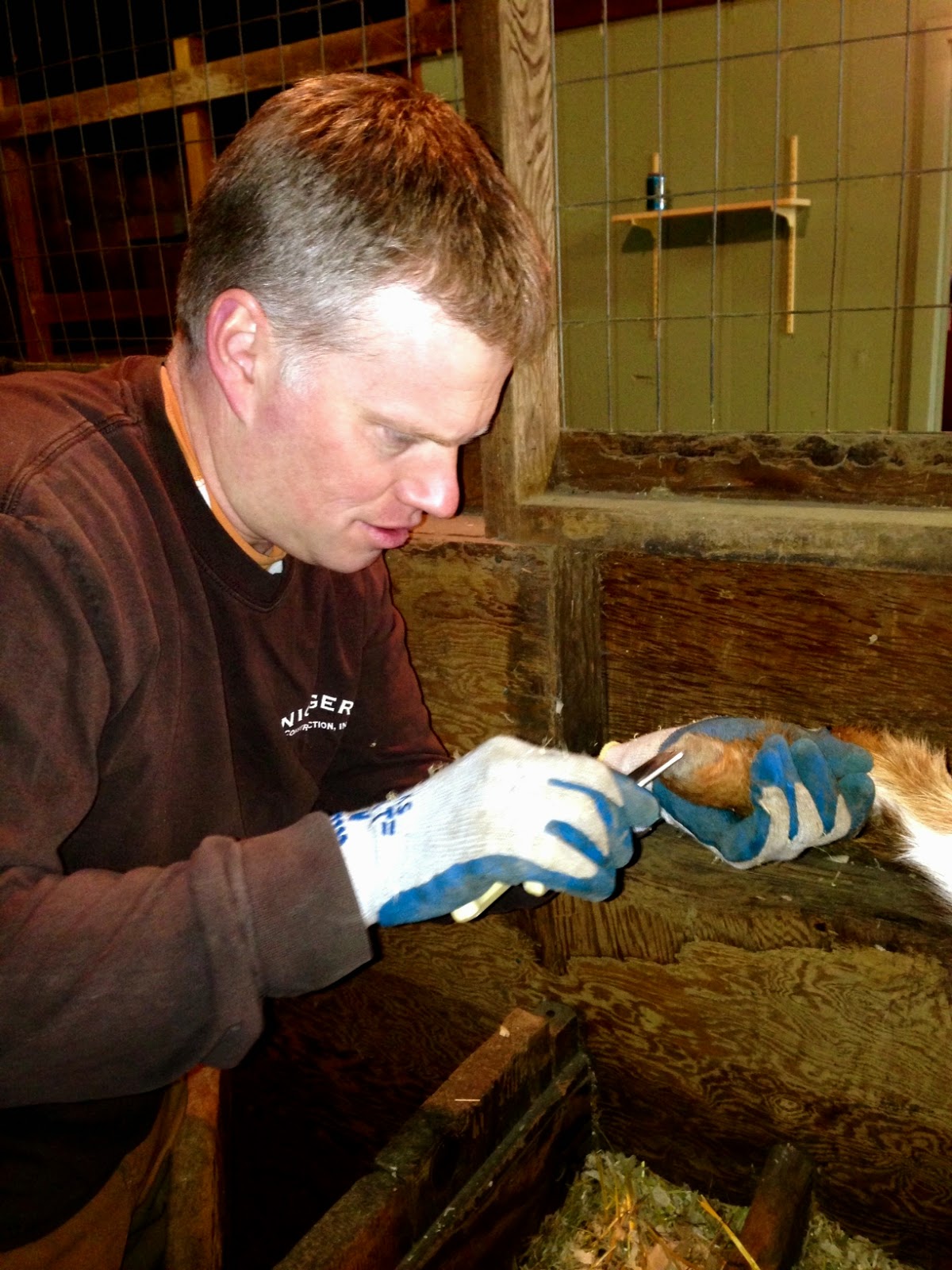 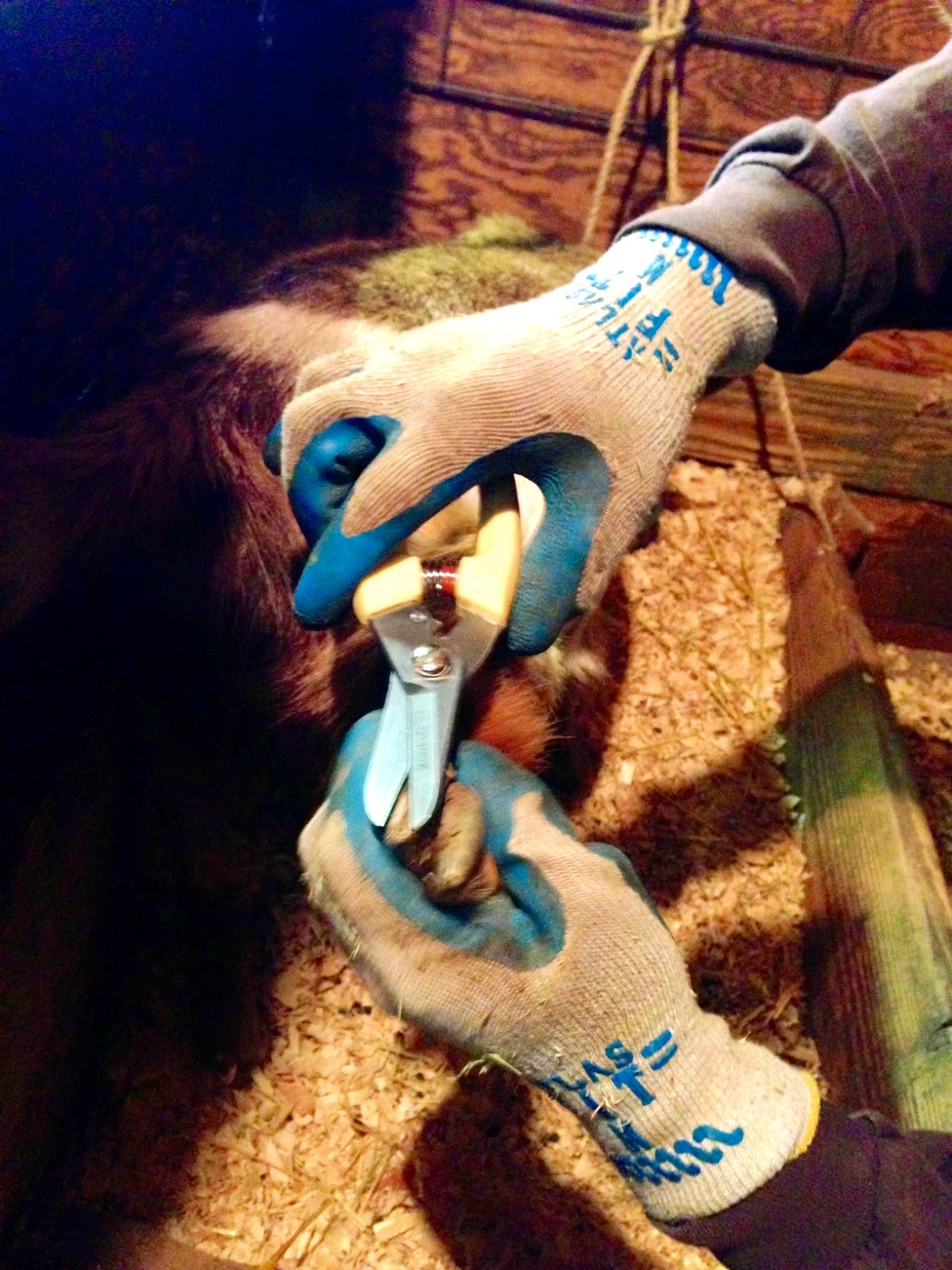 We did not even draw blood. Elisabeth was concerned by the whole process. She asked what we’d do if we cut off a foot. Caleb assured her that wouldn’t happen. She persisted, “But if it does, what will you do with the body???” Good question, but thankfully it didn’t come to that.

Keeping Promises
You may remember that last September I made a promise that we were done adding animals to our farm for a while. I have been to true to my word (and have only wavered slightly when seeing the many spring piglets for sale). It was Caleb’s idea to get some pullets (hens under a year old) at the Oregon Poultry Swap, which we had been planning to attend. Our big-picture chicken plan is to add chickens every six months or so to keep the stream of eggs continuous because, as chickens age, they begin to lay less. Britton had been really sick with a high fever for 9 days. On day 7 he tearfully shared his fear that he would not be well enough to go to the poultry swap. That’s my chicken boy!

Thankfully, Britton was better and our family headed out to the Polk County Fairgrounds in Rickreall. What an interesting experience. The exhibition hall was packed with vendors hocking very homemade handicrafts, roosters (a lot of roosters), pullets, rabbits, quail, and other random animals. There were so many people that it was hard to move (and keep track of four children). We arrived shortly after the doors opened but the pullet selection was already very picked over. The only lady with any selection left had 4 month and 6 month Bantam Cochins for sale for $15 each. We didn’t know anything about Bantams but they were adorable and had feathered feet (feathered feet!). So we picked up four: two silver 4 month olds and 2 black and white 6 month olds that were already laying.

As we drove home I used Caleb’s phone to research our purchase. Here’s what we learned about Bantam Cochins: 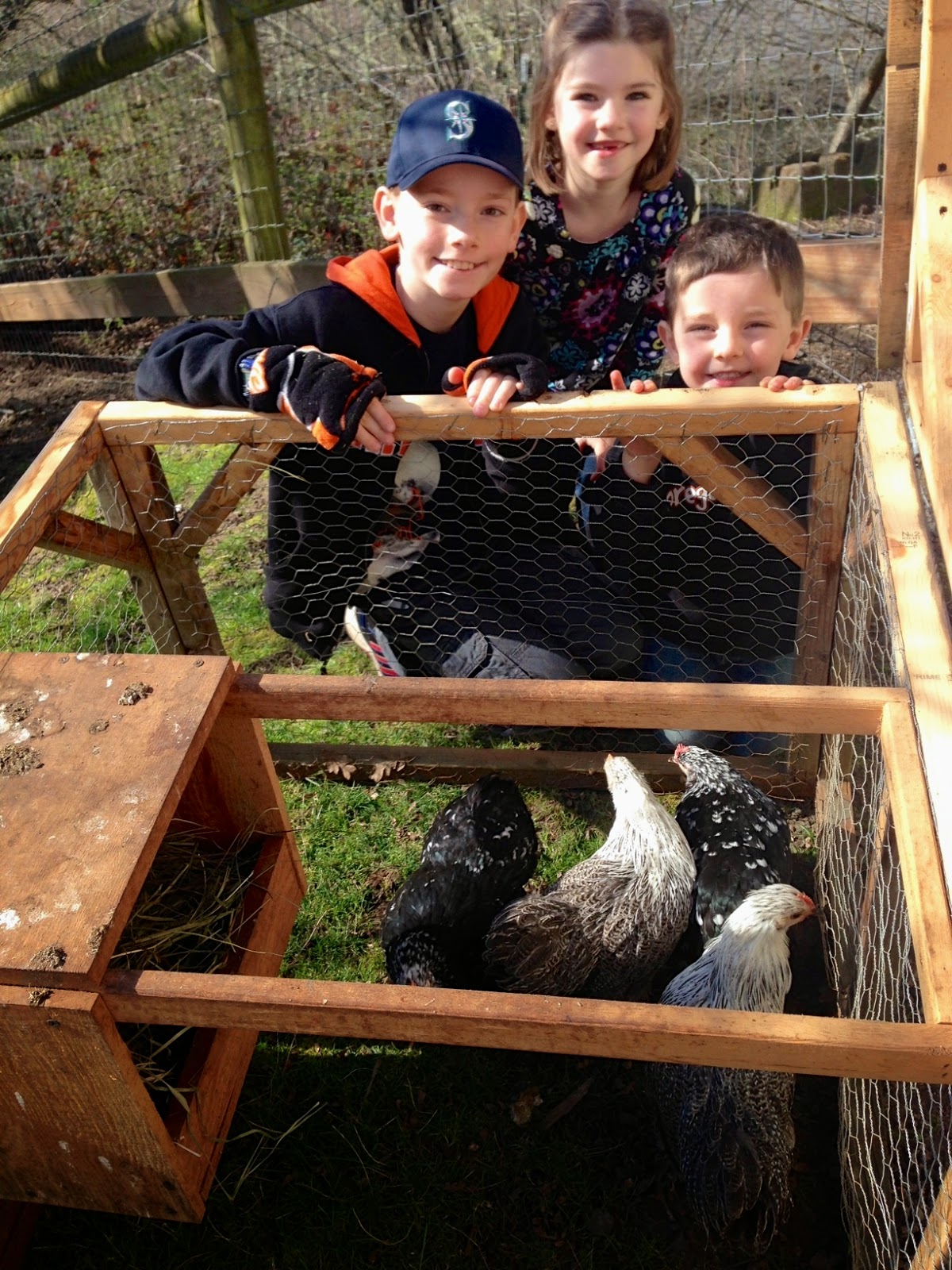 *They are originally from China but were given as a gift to Queen Victoria and are now very popular in England.
*They are poor layers.
*They only grow to 2 1/2 pounds. (Our other hens are 7-10 lbs.)
*They lay very small eggs.
*They love people and follow them around. (We have goats for that. And 13 other chickens.)
*They are like people in feather suits. (That is a direct quote from a Bantam website.)

Okay, so maybe we would not have chosen them if we  had researched first, but they are a bit of a novelty and we are always up for trying a new breed. They are stinkin-adorable and did I mention they have feathered feet??

We’ve been reading the Little House books all school year, so we named these four after the Ingalls girls: Mary, Laura, Carrie, and Grace. And we all agree, one particularly spunky black one is defintely Laura. 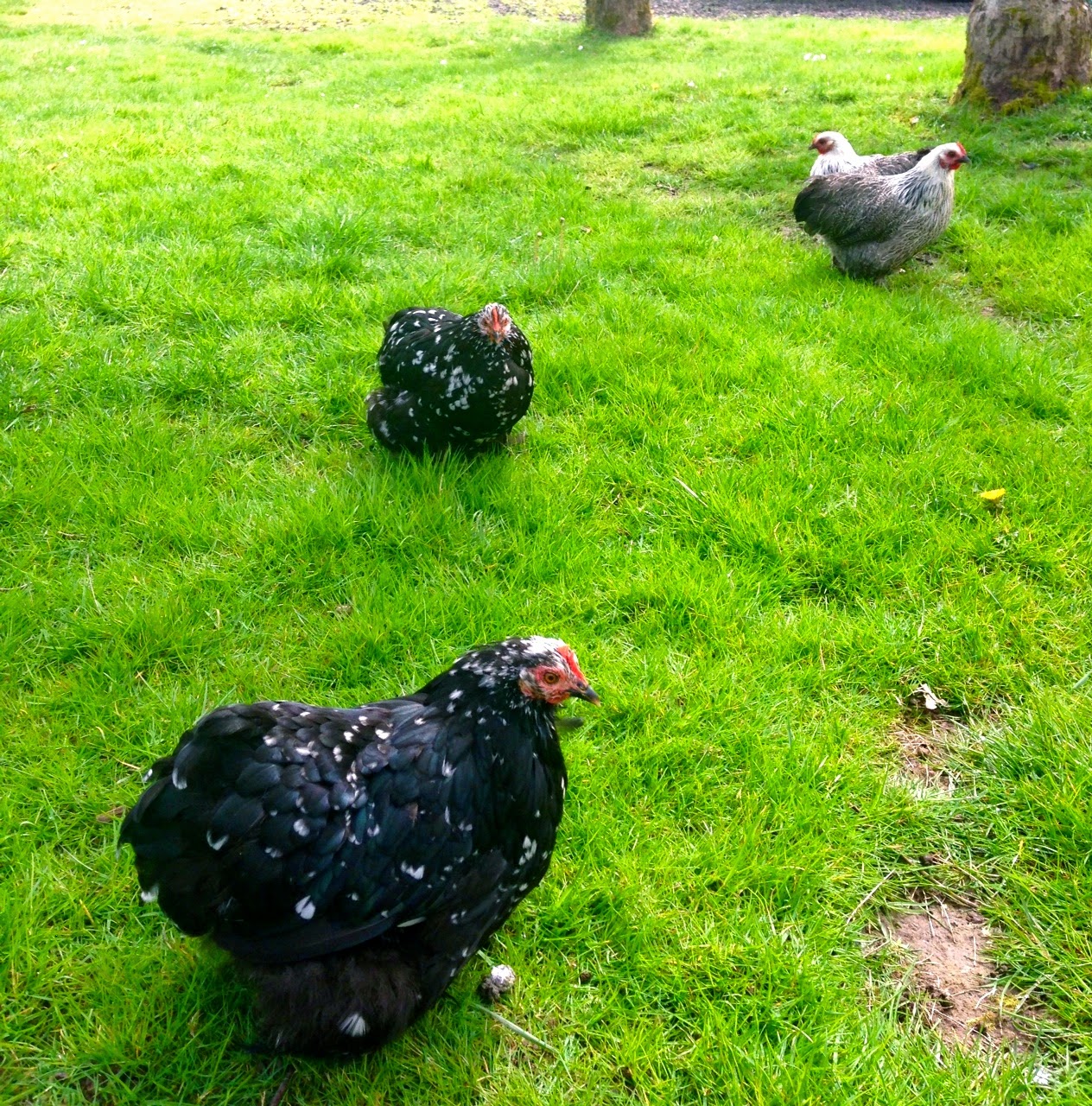 All winter we’ve been enjoying the calm, but anticipating that life was about to get cRaZy. (This has helped me keep the above-referenced promise, as I knew that we just could not take anything else on right now.) We bought a van and sold my car, in preparation for becoming a family of 7. We are on track to leave for China June 10 to bring home Graham Jeffrey. And I am currently 3 weeks into 10 weeks without a kitchen. Our kitchen remodel (and adding a bedroom project) is scheduled to be done two days before we leave for China.  What if there’s a delay and the project isn’t done? How am I going to get moved back in in the one day before we leave for China when I will have 10,000 other things to do? How am I going to detox my family from the convenience food I am feeding them while we live without a kitchen? My head can start spinning… I don’t know what these next few weeks are going to look like. But I know the One who knows, and I am giving it to Him. A new child, a new kitchen… it’s ALL GOOD and I’m sure these trifling details will work out. With all the time we’ll be spending OUT of the house, I’m certain to get my garden planted before we leave. And after we return from China, I’m thinking that a little spotted piglet or two might be just what Good Gifts Farm needs.