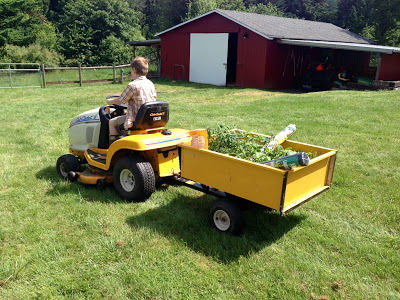 Holding Pattern
Spring is usually such a time of possibility – What new flowers do I want to try? What new animals do we want to raise? What new vegetables do I want to grow? But this year we have just been intent on daily survival amidst chaos and keeping all current animals alive. The above verse has been a good one for me. We did get fruit trees pruned and I did get my garden planted, though slightly smaller than last year. The repeat plantings from last year are tomatoes, tomatillos, peppers, broccoli, cauliflower, lettuce, kale, spinach, peas, green beans, watermelon, cantaloup, cucumbers, zucchini, yellow squash, butternut squash and pumpkins. The only new ventures are corn and onions. I am also trying carrot seeds again, which failed miserably last year. I’ve seen those pesky robins rooting around in my seed area, so I’m thinking that may have been what went wrong. Our raspberries are suffering from an unknown malady and our strawberry patch is about 50% smaller than last year. But the marionberries look to inundate us once again, and I still have a bunch in my freezer. (No complaints!) My pantry is still about half-full of last year’s canning, so I’m feeling relieved that I can do less this coming summer and still have plenty of home-grown things to eat throughout the coming year.

In the winter pastures go dormant and grass does not grow. (Think about how you don’t need to mow your grass between November and March, even though it is still green.) So all winter we fed our Mama cows, Stripe and Splotch, hay and more hay and more hay. We grossly underestimated the amount of hay we would need and bought bale after bale from those wonderful neighbors I always mention. Yet the Mamas got skinnier and skinnier. By March we called our neighbors and asked what they thought was going on. They said that nursing the Boys was probably taking its toll and that we needed to wean them. They were 9 months old after all. It was time. We came up with a plan where the Mamas would go down to our neighbors for a couple of weeks until the Boys were weaned and the Mamas dried up. Our neighbors cautioned us to pen the Boys up in the pasture farthest away from their property because they had done this process before with the previous owner and the cows went straight through the fence to reunite.


For two days we (and the rest of our neighbors) endured the piteous crying of four miserable cows calling back and forth to each other. It really was one of the most pathetic things I’ve witnessed. Finally our neighbor called and said that the plan wasn’t working. The Mamas were too distressed to eat and were just pacing back and forth along the fence line. He suggested we bring the Mamas back, but keep them in a pasture next to the Boys, so they could be near each other but not nurse. This did the trick. The Mamas licked their Boys through the fence, which was a very sweet sight, but after a week or so everyone seemed over it.


Because of the amount of hay required to feed two nursing moms through the winter, Caleb decided that maybe we should sell the Mamas. He did some research and discovered the Irish Dexter Cow. They are considered the perfect homestead cow because they are half the size of our Herefords, standing only 36″ tall, and requiring half the feed. Of course, you get half the amount of meat, but we would still have plenty for ourselves and some to sell. When we attended the Oregon Poultry Swap in February, a local farmer who raises Irish Dexters was there and we had the opportunity to pick her brain. She said when an Irish Dexter is in milk, even after nursing her calf, you can milk once a day and get 1-2 gallons, whereas a true dairy breed gives 5-9 gallons a day – way too much for the average family. We decided this is the direction we wanted to go and so formulated a new plan: We would sell the two Mamas to our neighbors (who had become very attached to them when they cow-sat last summer for two months and had offered to buy them), butcher the Boys in November or December when they are 18 months old, and buy two Irish Dexter Heifers, preferably already bred, in January. We have completed step one of that plan: Stripe and Splotch now live across the street.

cRaZy Times
I haven’t had a kitchen in 10 weeks. And not only no kitchen, but no family room, dining room, or basement either. We have been living in the Living Room. Is it possible to fit any more life into one room? 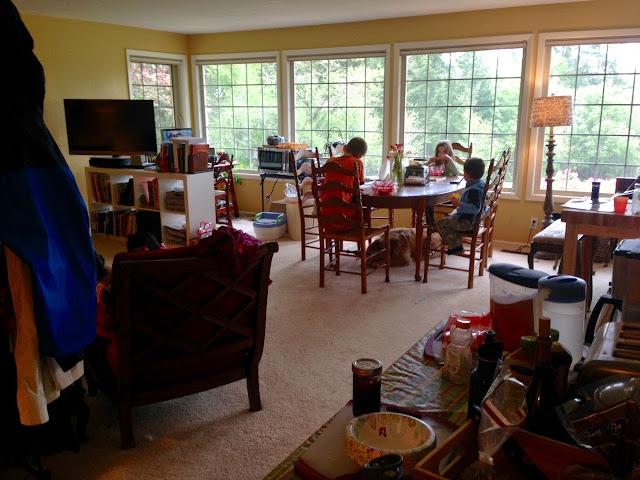 The room is hosting the piano, TV, computer, dining room table, microwave, toaster and coffee maker, training potty, (I abandoned this effort after one day. I just don’t have it in me right now.), the coat tree and shoe basket (our entry foyer is off limits also), four kids, two dogs, one cat and the fish tank. On the back deck is the refrigerator and camp stove. The toaster oven is set up in the garage. I use the sink in the laundry room (when I can get to it).

People keep asking me what we’re eating. Here’s the pretty complete rundown: cereal, pre-packaged snacks, tuna sandwiches, hot dogs, crockpot stew, quesadillas, and taco salad. You know, life just goes on and we’ve adjusted. The kids are doing school in extremely tight quarters with a lot of construction noise around them, but life goes on. We figure out what to eat because we’re hungry, and life goes on. I am mindful that much of the world would be very thankful to have a propane stove and clean running water so that helps give me perspective. (Though I’m not denying it has been hard. I am SO ready to be done with the chaos and excited to have a new kitchen!)

For the past two days (and for the next seven) we have been completely out of the living room as well. We are only allowed in the bedrooms. Thankfully we have a random sliding door in the bedroom hallway that we’ve always laughed at, but allows us to actually leave our house during this time. Elisabeth said, “We have to live in our bedrooms?? This just keeps getting worse!!” It’s definitely getting worse before it gets better. But after these nine days… completion. And then five days later, on to much bigger and better things….

We leave in twelve days for China. Paperwork is complete, tickets are bought, itineraries are settled, and a little boy waits for his family. People keep asking me if I’m excited. I definitely am, but it’s not a pure excitement. It is twinged with some anxiety about the unknowns and a greater understanding than we had the first time around of the woundedness that our son will bring home with him. It is impossible that two years in an orphanage won’t leave their mark. BUT, we are thankful that we know the One who heals and pray He will use our love and our home as vessels of healing for Graham Jeffrey. We welcome him into our family with open arms and the excitement lies in watching Graham’s story unfold and merge into ours, for our God is also the Master Storyteller. 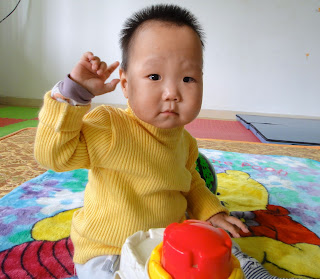 I can’t believe I will be pinching these cheeks in just a couple of weeks! Pray for us, Friends. Pray for the logistics of our trip and for our hearts to be open and loving. Pray for Graham as his world is about to be rocked completely. And please pray for the kiddos and grandparents back home, especially Rosie who struggles with being away from us.
Now to him who is able to do immeasurably more than all we ask or imagine, according to his power that is at work within us, to him be glory…
Ephesians 3:20-21
Please follow and like us: