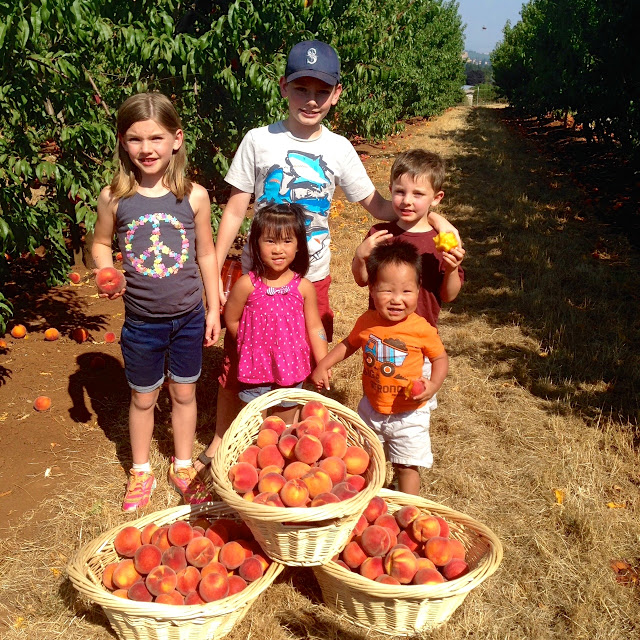 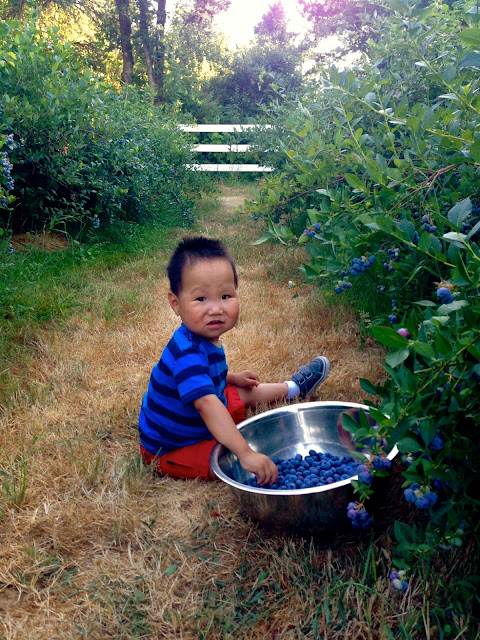 One blessing of living in this lush, fertile valley is that whatever we don’t grow ourselves, due to lack of space, lack of energy, or a failed crop, is almost always available locally. We have been unsuccessful with blueberries. We will keep trying, but in the meantime, one mile down the road from our house is a blueberry farm where we picked 45 pounds of blueberries this summer. I froze them on cookie sheets and then loaded them into gallon ziplock bags. We will eat them in smoothies, pancakes, and as a plain frozen snack all year long.

Our strawberries completely failed this year, whereas last year we had a bountiful crop: plenty to eat, plenty to can, and some to freeze. (We have some work to do this winter to get them going again.) Fortunately, we were able to pick at a farm a short drive from us and freeze 20 pounds for the coming year.

We would like to plant peach trees, but have not yet, so are at least several years out from having our own peaches. Every summer we drive twenty minutes to a local farm and pick by the basketful. 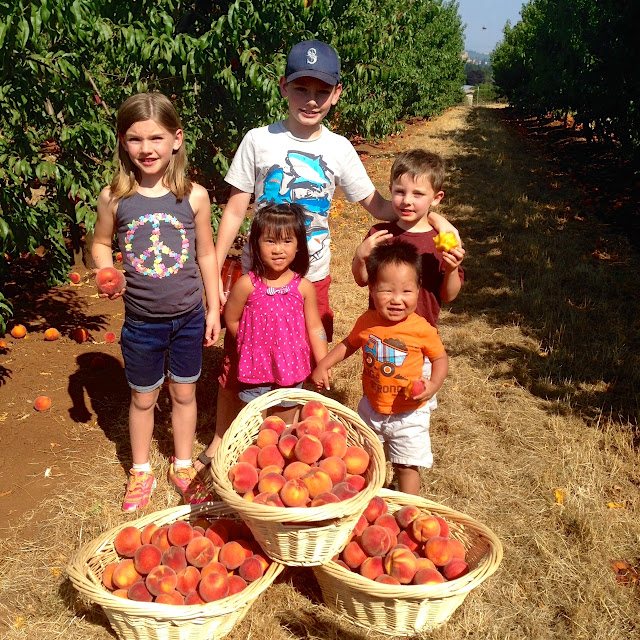 This year we left with 65 pounds. I canned a bit of peach jam, we made homemade peach ice cream, and ate many plain. But the majority I sliced and froze, with skins on (hate to peel off all those nutrients), to be used in smoothies throughout the year.

Our favorite smoothie recipe (I triple it for the kids and I): 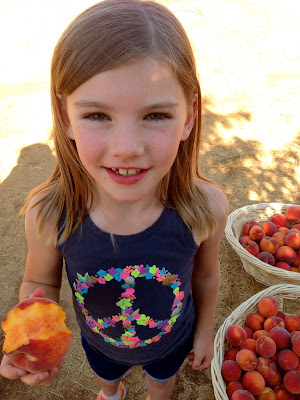 
Graham ate his first peach here and is definitely a fan! 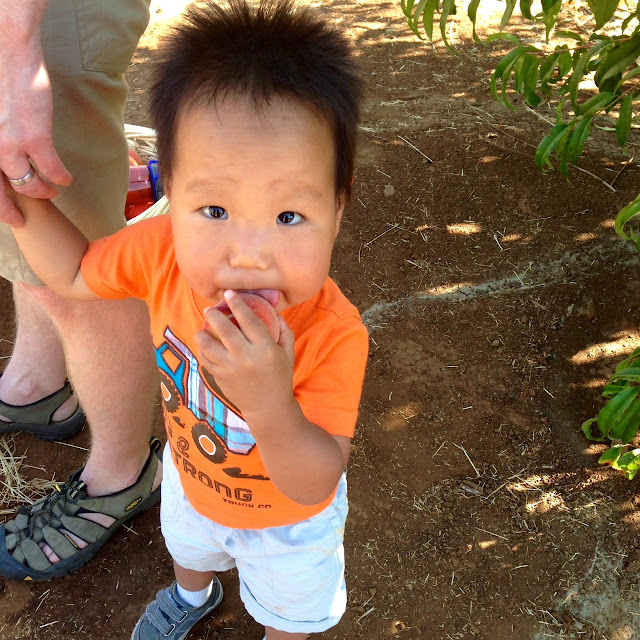 At the peach farm, in this very rural location, I was surprised to see an Asian woman on the little wagon taking us out to the orchard. (The orchard owners tired of cars running over their irrigation pipes and so require us to be transported.) She kept staring at us and smiling and I was fairly certain she was Chinese. When we got off at the same stop to pick the same variety of peaches she asked if my children were Chinese. I told her they were and then she hugged me and said, “Thank you.” She had a thick accent, but her English was good. We proceeded to have a pleasant conversation in which I discovered she has been here in the States for 6 years and married an American. She hugged me and thanked me no less than three times in our short five-minute conversation. I stressed what a blessing our Chinese children are to us, but she was clearly moved by what we had done. I am always equally moved when Chinese people, who truly understand the desperate plight of the Chinese orphan, share their feelings about our adoptions with us. I believe this moment in a peach orchard in rural Oregon was a sweetly ordained moment by God.

Though we have six apple trees, we had a very small crop this year. The two that appear to be Gravensteins have only every borne a few apples each season, and the other four (two Golden Delicious and two Red Delicious) were either not pruned enough, pruned too much, or pruned too late in the season. I could tell by the scarcity of blossoms in Spring that we would not have many apples. We also did not follow the prescribed organic spray schedule as we had planned to, so the majority of the apples we did grow were scabby and wormy. Biting into one them was like a game of russian roulette. I would not recommend it. I was able to cut away the yuck and make a fair amount of apple butter, and a few of our Golden Delicious were beautiful for eating. But for the remaining dozens of quarts of applesauce and pints of apple butter, we returned to a place we had not been in a few years: our favorite apple farm, Beilke Family Farms. 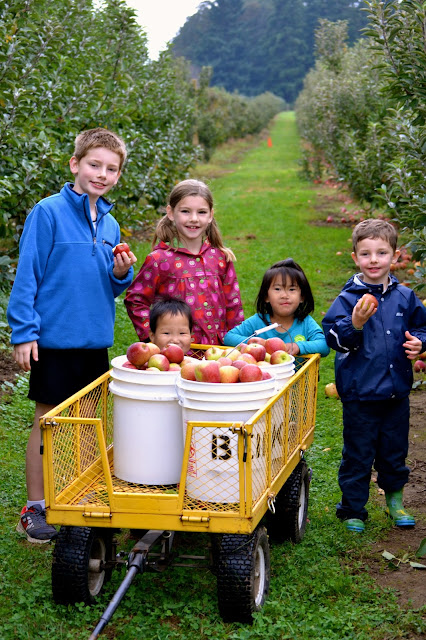 We picked about 70 pounds of Gala, Fuji, and Granny Smith. They were gorgeous. I’d risk biting into one of those any day! 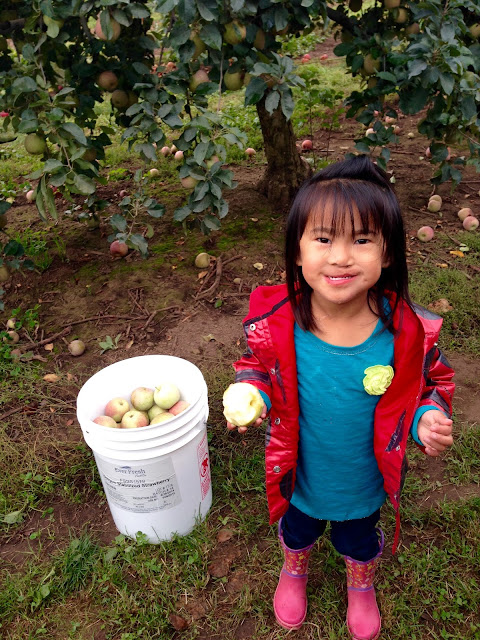 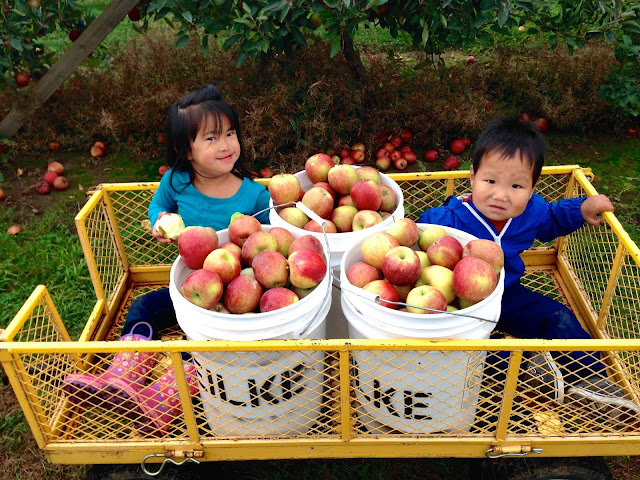 Last weekend, I got to work, after a welcome month-long break from canning: 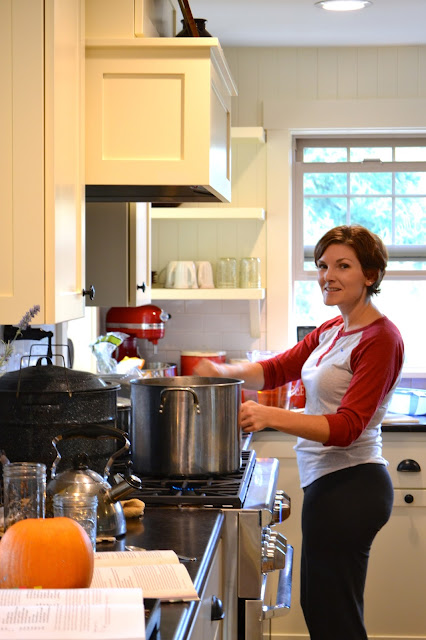 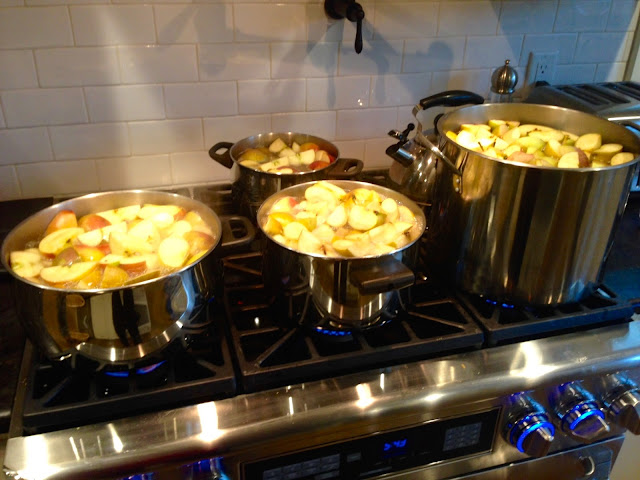 I don’t think I can adequately express how much of a joy canning on my new stove is, compared to my old, small, ceramic-top stove with a broken large burner, where it would take an hour just to bring my pot to boil.
I wrote last year about my favorite applesauce and apple butter method and recipes and also about the amazing Kitchenaid attachment that makes perfectly textured applesauce. 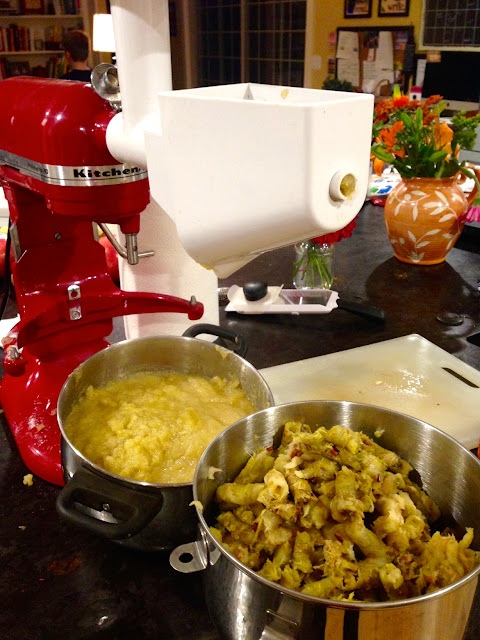 We feed the apple scraps to the cows and goats and it feels very satisfying to know absolutely nothing is going to waste.

I had several quarts of applesauce left from last year, but I opened the last apple butter in July. We shall now make it through another year! 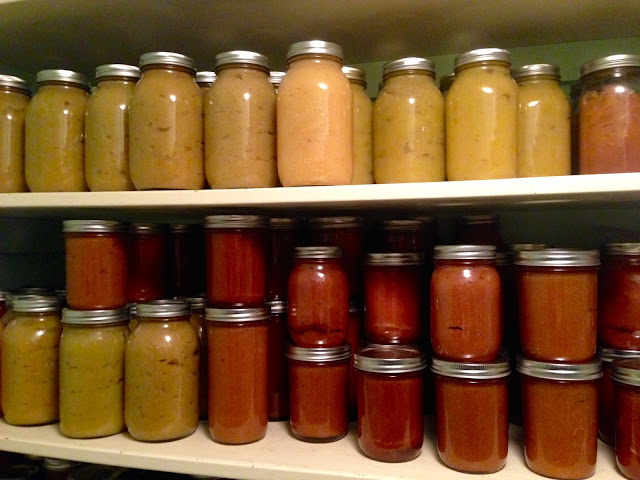 We are very thankful to live in a place where we can so easily live out our beliefs that it is best to buy local, both to support the local economy and also to buy food with the highest nutritional quality (so much is lost during transport and on store shelves) from people who we know are farming their land responsibly. In our VERY modest foray into growing our own (both plants and animals), we are in awe of people who do this for a living. We love Oregon and our local farmers!