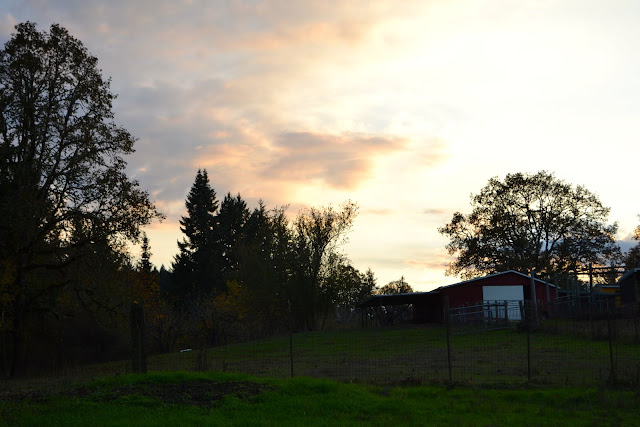 Many are the plans in a man’s heart,
but it is the Lord’s purpose that prevails.
~Proverbs 19:21

2016 arrived with hopes, and dreams, and plans,

and the snow that our family had been longing for for two years. (Every day my sweet Charlie-boy re-caps the 5-day weather forecast from the newspaper with a sad, “It’s not going to snow this week, Mom.”) 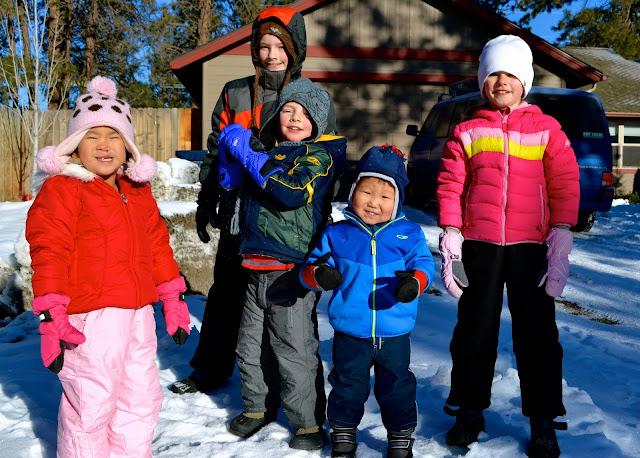 Of course, we had to chase the snow down in Central Oregon, but we did find it and the kids started their year off just right. 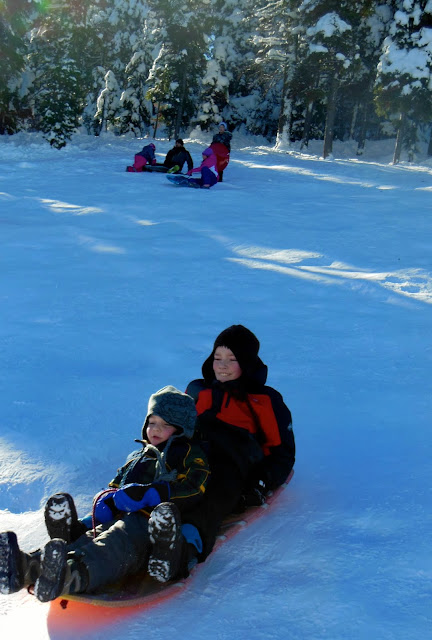 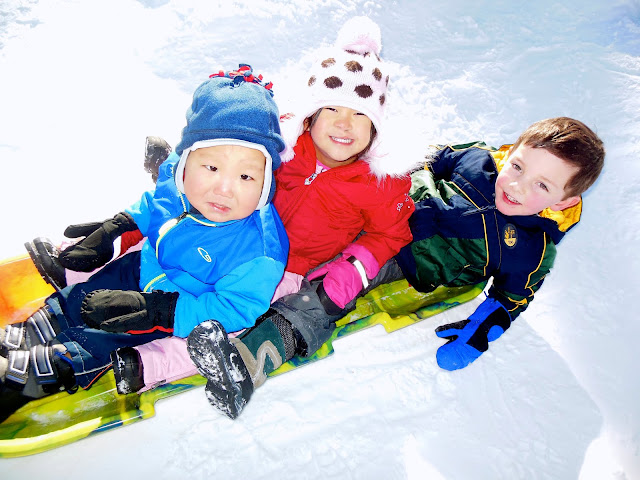 The adults in the family used the time away to take stock of our homesteading goals for the new year. And we do have a few, perhaps best summarized by the books we wrapped up for each other for Christmas. 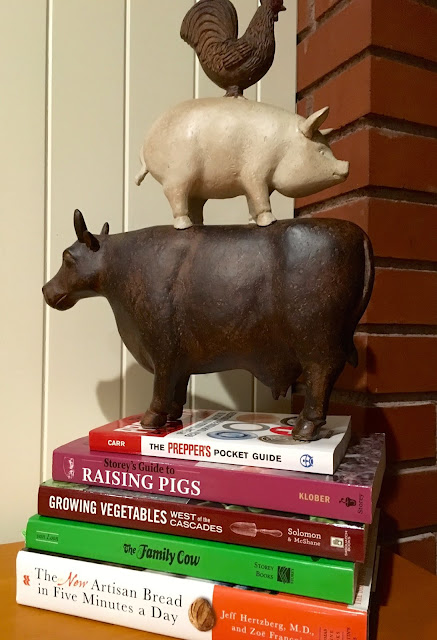 Bread
I have had a bread machine for years and use it fairly regularly. However, I have never made a completely from-scratch bread that I’ve kneaded myself and baked in the oven. After listening to the Pioneering Today podcast entitled Why You Should Grind Your Own Flour & Choosing a Mill , I became intrigued by the benefits of grinding flour. I use a lot of whole-wheat flour in our recipes, but what I didn’t understand was that in order for flour to be shelf-stable, both the bran and the germ of the wheat berry are discarded and it is merely the starchy endosperm that is left. By grinding my own wheat berries, I would be baking a much more nutrient-dense loaf of bread. And while freshly ground flour does go rancid quickly (although it can be stored in the freezer for several months), wheat berries themselves keep for years. Since we are attempting to build up our food storage (see The Prepper’s Pocket Guide on the top of the stack), this is a definite benefit. So for my birthday, Caleb got me all set up with supplies, plus he took me up to Bob’s Red Mill, which is bulk-grain heaven, to pick out my berries. 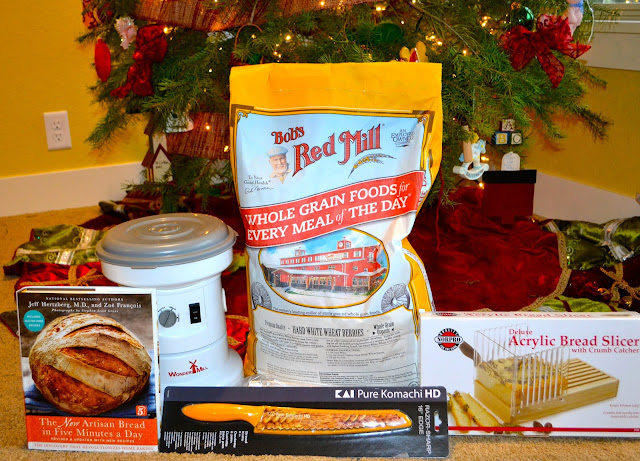 My goal for the New Year is to master two types of bread, one crusty artisan bread and one everyday sandwich type of bread.

Garden
I am planning to approach my garden differently this year. First, we are completely restructuring the space and building raised beds to allow us to amend the soil more efficiently and also tidy up the garden visually.

Second, after listening to a Pioneering Today podcast about heirloom seeds, I decided that that is the direction I want to go with my garden. I almost always choose the instant gratification of purchasing vegetable starts at the nursery rather than mustering up the patience required for planting seeds. However, since self-sufficiency is one of our goals, planting heirloom seeds would enable me to save seeds for next year, thus always having a continuous supply, rather than being dependent on a grower. Hybrid seeds cannot be collected and planted the next year as they will not grow true to their parent plant. Third, I have decided that instead of just walking into a nursery, purchasing whatever they have, growing too much of it, and then trying to figure out a way to use it, I will instead look at my family’s favorite recipes and evaluate what crops would most enable us to eat with all or nearly all of our own ingredients. Along with the tomatoes and squash I already grow plenty of, some obvious choices would be potatoes, corn (much more than the small patch we grew last year), carrots, spinach, green beans, peas, onions, and garlic. I’ve decided I would rather grow less variety and really learn how to do a few crops well. This might be a “learning year” (i.e. less abundant than previous years), but I am okay with that.

We have several animal goals for 2016, and some of our plans are already well underway.

Pigs:
Caleb is researching pigs and has designed plans for turning one of the animal shelters in our pasture into a pigpen. It will be a little trek from the house for daily care and feedings but the outbuilding already has water to it and seems the best option for using what we already have available to us. Plus, I figure a few extra steps every day is good for everyone. We plan to get two piglets in the spring to raise for fall slaughter, keeping half of one for ourselves and selling the other three halves.

Goats:
Since getting our goats, Marianne and Elinor, a year-and-a-half ago, we have wanted to breed them. They are purebred, registered Nigerian Dwarfs and aside from the fun of having adorable kids running around, we should be able to sell the kids for a nice amount of money. The procedure for breeding them is knowing when your doe is in heat (every 17-21 days), finding the 12 hours that she will “stand for a buck”, and then rushing her out to a breeder who has a buck. I contacted the farm where we bought them and the owner said for $15 each we could bring them out to be bred. But it is an hour’s drive and I would have to determine when they were ready and then head out immediately, and if the two of them weren’t in heat at the same time I would have to make two trips. It all seemed like so much hassle that I had the idea that it would just be easier to buy a buck, allow him to be in with the girls for a month, and then re-sell him.  The interesting thing is that in the opening paragraph of my first ever blog post about goats, I rattled off all of the reasons that it is absolutely not recommended that anyone ever own a buck, including, but not limited to:

And yet, part of me thought, “How bad can it be?” So when I found a purebred Nigerian Dwarf buck on the Oregon Homesteaders Classifieds Facebook page for only $125, I quickly made arrangements to purchase him. Meet Westley! 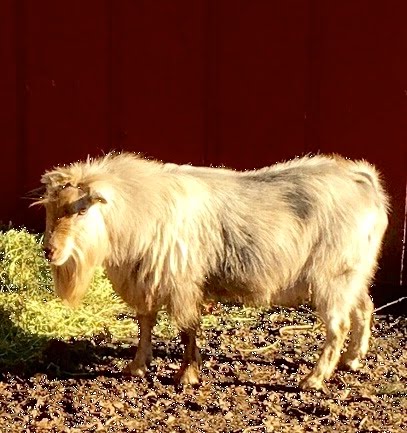 And how bad is it? First off, the smell is stifling and just brushing against him will put your clothes in need of a washing. If said clothes are left in the laundry room, the entire vicinity will reek. At times, our entire property emanates goat musk.

When we ushered Westley into the goat pasture for the first time, Marianne was actually in heat so we all got a front row seat to the “bizarre” behavior I had read about.  I was explaining to my dear mother what we had witnessed, and she astutely noted, “You can’t un-see that!” No, I cannot. Nor can my children. That’s home education, folks!

Westley made quick work of his assignment and we should have two litters of kids in June. Between the horrible smell, his repeated escapes over the fence, and the fact that I was mounted last week in the pasture (not my most glamorous homesteading moment), we are anxious to re-home him.

Cows:
In November we slaughtered Mask and Goggles, the calves whose births we had watched and who we subsequently raised for 18 months.

We had sold their mamas a few months back (with hopes and plans of getting Irish Dexters later on) and it was their time. As D-Day approached, the kids were a little bit sad but we talked a lot about why we raised the cows; they were not pets. Their purpose was to feed our family and the families of many people we care about. When the mobile slaughter came, the kids actually watched with fascination (from a distance) as the cows were skinned and cut up. And I think we all have a deeper appreciation for that delicious Shepherd’s Pie on our dinner table, as we understand exactly where the pasture-raised beef came from. 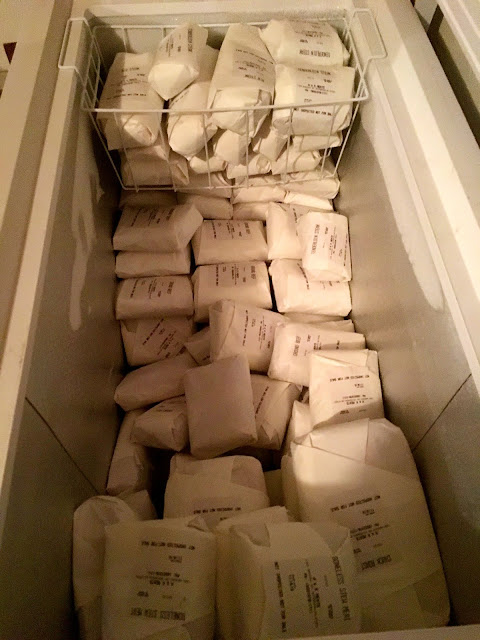 We have 300 pounds of beef (which is 1/2 of one of the cows; I won’t say which) in the freezer and we sold 800 pounds to friends. We are not great record keepers, but from our estimations, we were able to pay for the raising of the cows and for the beef we kept for our family. We also gained tremendous satisfaction from offering such healthy, humanely-raised beef to people we know and love.

A couple of weeks ago we welcomed pregnant Annabelle, who will be giving birth in the next couple of months (we’re not sure exactly when) and her 9 month-old steer calf. 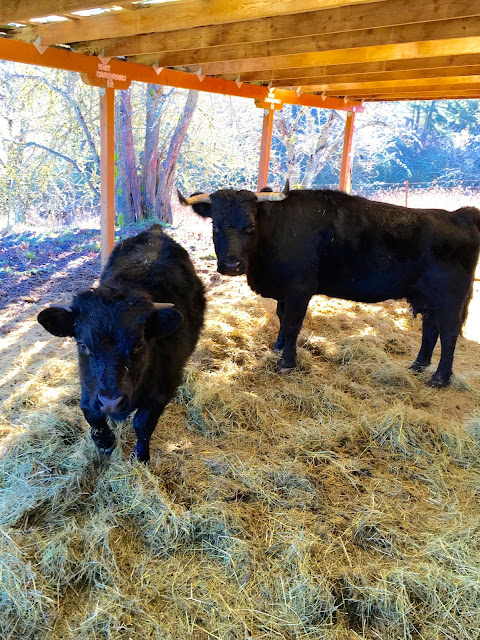 They are Irish Dexters, which is exactly what we had been searching for. What’s hard to tell from the picture is that Annabelle is only about three-feet tall. Irish Dexters are a small “homestead” breed, perfect for beef and milk. We will be raising the calf for beef, as well as Annabelle’s next calf, if it is a bull. If the calf is a heifer, we will keep her to breed, as we would like to have two heifers for a continuous cycle of calving and beef. 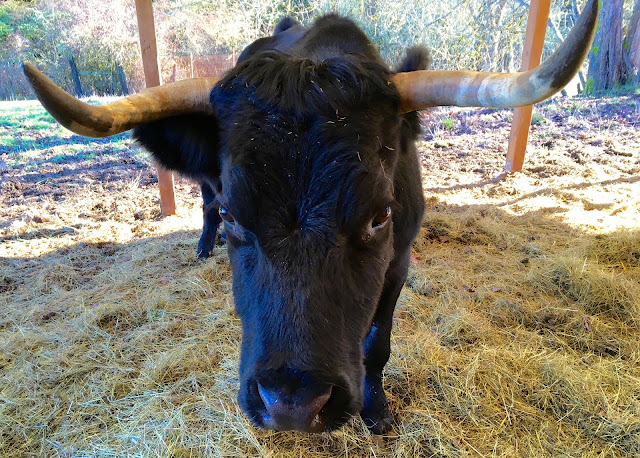 I am so in love with this sweet girl. She is 11 and was milked by her previous owner so she is calm, gentle, and extremely friendly. She loves to be scratched and brushed and will stand for as long as I’ll do it. Our plan is to get a few more calves out of her and then let her retire and live out the remainder of her days as a well-loved pet. She has calved every year of her life, so I think she’s earned it.

We excitedly welcome 2016 with hopes of expanding our limited skill set and the promise of many homesteading adventures. But we do hold our plans loosely and trust that, succeed or fail, God’s purpose will prevail in all our endeavors.