More Chickens, Fewer Roosters, and a Freezer-Full of (Chicken) Meat 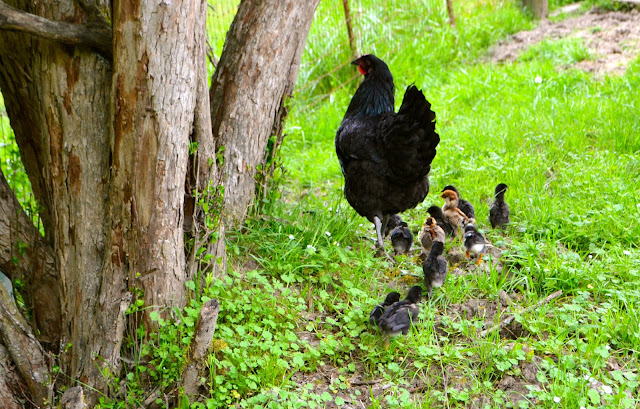 Someday I’m sure I’ll run out of chicken topics to write about, but today is not the day. The well runs deep.

Last spring, we let the Mama above hatch chicks. They were adorable and she was a good mama… for five weeks! Then she moved herself back into the coop (after being with them in the barn) and never paid a moment’s attention to them again. So these small, defenseless chicks fell prey to animals above them on the food chain, at least one predator being our cat, Digs.

After rescuing a chick from his teeth, setting up an ICU unit in the laundry room, and then having to end the chick’s misery two days later when he worsened, rather than improved, we moved the chicks to a small mini-coop we have and then had to care for them ourselves. The first mama we allowed to hatch chicks took care of them until they were almost her size and we never had to do a thing, so this was very disappointing.


We had determined to never let this neglectful mama hatch chicks again, and then came the surprise hatching I wrote about a couple of months ago where she unknowingly hid out on some eggs until we found 10 chicks running around the barn one morning. And once again, she moved herself back into the coop when they were five weeks old, but we were expecting it this time. We did rescue two decent-sized chicks from the jaws of Digs, once when Digs actually climbed the fence and entered the chicken pasture specifically to attack. Bad kitty! Both chicks lived and we have since moved them into the protective mini-coop. The problem with this surprise hatching was that it moved us into the realm, numbers-wise, of 30-something chickens. I can’t really keep track exactly, but I’m pretty sure I’m venturing into the realm of “Crazy Chicken Lady”. Plus, half of them are black and look exactly the same now because they are a “barnyard mix” and black is the dominant trait. I can’t tell anyone apart The current batch in the mini-coop is 8 or 10 weeks old?? I don’t know. Too many chickens! When they get to a certain size, Digs will leave them alone, and we will release them to the rest of the flock.

Surprisingly, Brody the bird-dog has never caught or even chased a chicken. He is the best dog in the world and I really don’t think it is in his power to disobey us. We may have told him no once years ago and that was the end of the matter. He and the chicks/chickens co-exist peacefully.

If we’re having all these chicks, then there must be roosters on the premises, right? A few months back I wrote about having three roosters from the first batch of eggs we hatched, which was at least two too many. We knew that two must be “eliminated”, but as much as we are embracing this farm life, we kept procrastinating the task of offing two roosters, for it’s not a pleasant task. But neither is having a sky-high feed bill without eggs to show for it, so finally, I came home from grocery shopping one day and the kids excitedly informed me that the deed had been done and that they had watched. Or at least they had watched the first one, and surprised at its brutality, opted to excuse themselves for the second round. Home education.

How did we decide which rooster to keep? He was the one who was the first to crow and whom we all just felt warmest towards . (These matters of life and death are so subjective.) After we committed to him being our one rooster, the guardian of our flock, and after watching him in action, we decided to name him Prince Caspian, for he is very noble.

Honestly, he is the perfect rooster. We have not lost a single hen since he has been on duty. He is not aggressive toward us, but very protective of them. When I bring a bowl of scraps out, he could easily take the choicest morsels for himself, as he is 2-3 times their size, but instead will pull things out and then make this certain call that beckons the hens over and he’ll offer it to them first. When they are out free-ranging, he constantly stands alert, watching for predators while they forage. It is quite sweet and moving. I love to watch it. Of course, he does take his pleasure when the urge strikes, as the 100% hatching rate for our eggs proves. But that is how our blessed Creator designed it and the system works.

We have wanted to venture into raising meat chickens for quite some time. After seeing certain videos and pictures, and reading certain news articles about the conditions of commercial chicken farms it has been very trying for my conscience to purchase chicken at the grocery store. I occasionally succumb to the “I-have-no-idea-what-to-make-for-dinner-so-I’ll-buy-a-Fred-Meyer-rotisserie-chicken” purchase, but mostly we don’t eat chicken, accept when I can be a part of a home-grown operation and raise and butcher ourselves or buy on a Facebook homesteading classifieds page I belong to. That is not an indictment on anyone else’s chicken purchases, but my own conscience has been pricked. It’s horribly inhumane out there.

I have read countless articles about raising meat chickens. There are basically two breeds: Cornish-Cross (what all grocery store chicken is) and Freedom Rangers. Cornish-Cross are bred to get very huge very fast. They are difficult to free-range because they are so large that they pretty much eat, poop, and lay in it. If you let them live past eight weeks, they are likely to have a heart attack (they are bred for those huge, white-meat breasts we’ve grown accustomed to) or their legs break because they cannot support the above-referenced breasts/bodies. The Freedom Rangers are a heritage bird that free-range and take longer to get to target weight, but lead a more “natural” life as they have not been designed to live and die in eight weeks. But we’ve heard their meat is a little darker and not quite what we’ve grown accustomed to, yet still we wanted to give them a try.

In June, we had three broody chickens at one time, so we decided to try and buy some meat chicks and see if a chicken would accept them as her own and raise them for us because we’re lazy like that. (I asked the question on a Facebook homesteading chat group I belonged to and people testified they had had success with this.) I called around everywhere and only one place had ten cornish-cross chicks left. We snatched them up (even though we would’ve preferred to try the Freedom Rangers), waited until dark, and covertly tucked them around one our most matronly hens. The problem is these weren’t the helpless little one day old chicks making their pathetic chirping sounds. They were left-over two-week old chicks and already decent sized. That broody mama freaked out, moved herself back into the coop and snapped out of her broodiness completely, as did the other two broodies when we attempted to force an adoption on them. We have NEVER been able to snap a hen out of broodiness except to let her hatch eggs or move into the broody-buster.

Suddenly we had ten meat chicks we were not prepared to raise, along with a diabolical cat, so we quickly threw the chicks in a barn stall and strung chicken-wire over the top. Caleb put a little roost in, but these are not natural chickens and they never did roost. We fed them constantly and because they were inside, their days and nights were mixed up. They would sleep during the day and be active at night when we turned their heat lamp on to ward off the evening chill. I suppose they didn’t quite lead the “free-range” life we would hope our meat chickens would lead. But honestly, they could not even walk around. They would eat laying down. They would take a couple of steps and have to rest. It was uncomfortably unnatural. By the time I called Mineral Springs Poultry to make a butchering appointment, I could not get in until they were 9 1/2 weeks old, which is dangerous for a Cornish-Cross. I ended up calling back just after eight weeks to see if they had a cancellation because I was worried about these chickens dying on me. They were obscenely obese, and thankfully I was able to get in earlier. 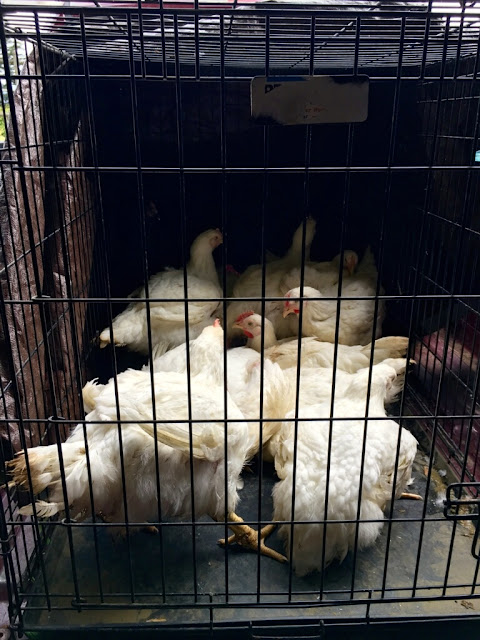 Caleb had an hour to kill after dropping the chickens off at the poultry processor, so he ate lunch at the casino nearby, winning $20 while there. I am totally counting that against our cost, bringing our cost per pound down to $1.90.
Some final thoughts: This was a very quick, easy, relatively cheap six-week project. All we had to do was feed/water them twice a day and clean out their barn stall weekly. I do think our chickens had a better life than in a factory farm because they could at least move around, though they were hardly able to. Next time I would absolutely like to try the Freedom Ranger breed and attempt to free-range them. Also, it was convenient that we bought them at two weeks old, as that saved us some feed. And the feed was quality, so much better than any that is given in conventional farming, so I feel good about that. Price, though, cannot be the bottom-line in a venture like this, as we cannot compete with Tyson or any other conventionally farmed chickens. I’m not sure what an “organic” Trader Joes or Fred Meyer chicken runs, but I think we were probably competitive. Regardless, I am very satisfied with this view into my freezer. 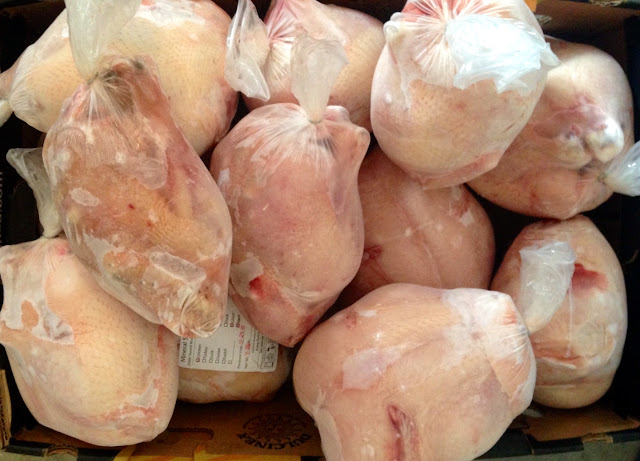 We had a little four month old rooster we sent to be processed from one of our hatchings along with the Cornish-Cross. Even though he was twice as old, he was a pathetic two pounds. I’m not sure how good of eating he’ll be, so I think I’ll just make some broth out of him. Shockingly, out of seven surviving chicks, he was the only rooster. 6 hens!!!! Those odds are unheard of – akin to winning the lottery. Not mathematically, of course. But practically speaking, that NEVER happens! There are six remaining chicks in our mini-coop now, so we shall see if we are so lucky this time. If so, I may have to head out and buy a lottery ticket. 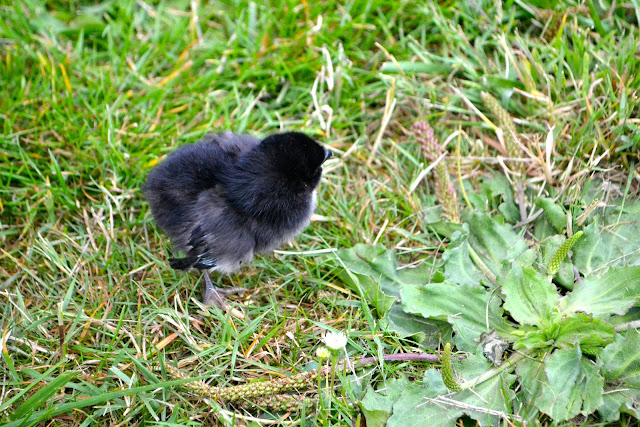 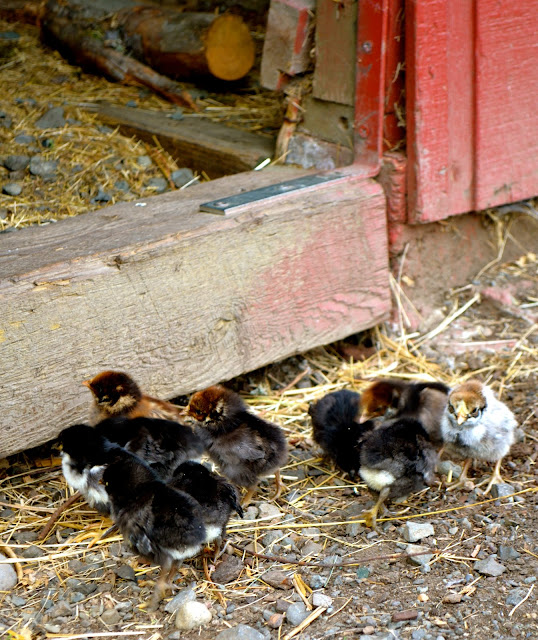 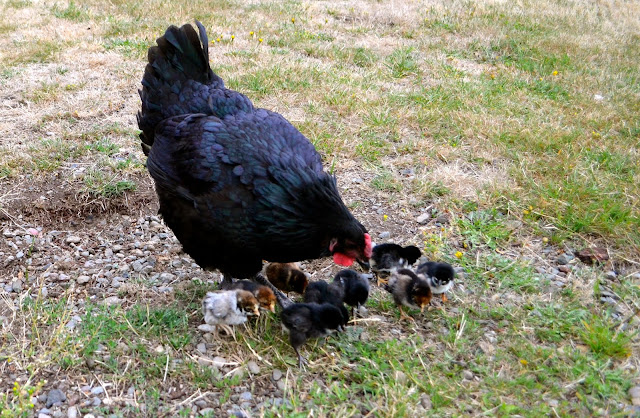