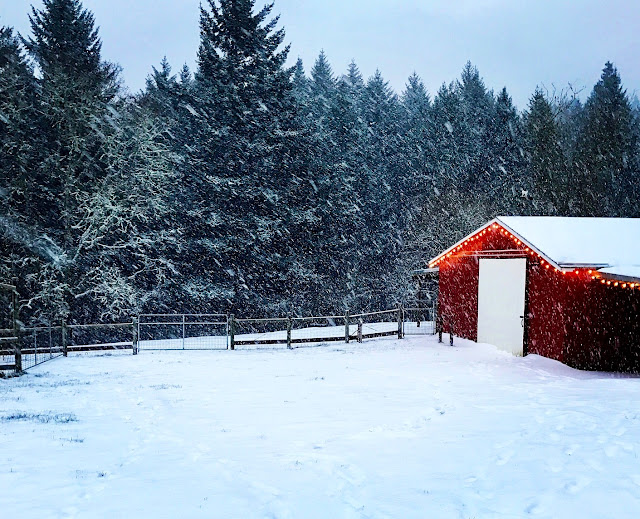 No matter how long the winter,
Spring is sure to follow.
~Proverb
The title is a bit dramatic if you’re comparing our winter to the one in Laura Ingalls Wilder’s book by the same name. We are not nearing starvation and we have not suffered blizzard upon blizzard. But we have had four rounds of snow, weeks of sub-freezing temperatures (we had a hen freeze to death), and record-setting rainfall this month. All of it has made for a very un-inspiring homestead winter, thus my longest ever blogging hiatus. Not much to report!
However, since we had not seen substantial snow in three years and longed for it so badly (many prayers were offered up by my children beginning in October), I refuse to “complain” (at least officially), but I will state that we are ready to be done, even as it snowed again this morning.
At the dinner table we often go around and say the best part of our day, the worst part of our day, and what we’re looking forward to tomorrow. In that spirit, I am going to reflect on the best part of winter, the worst part of winter, and what we’re looking forward to in Spring.
The Highlights:
The sheer beauty of it all 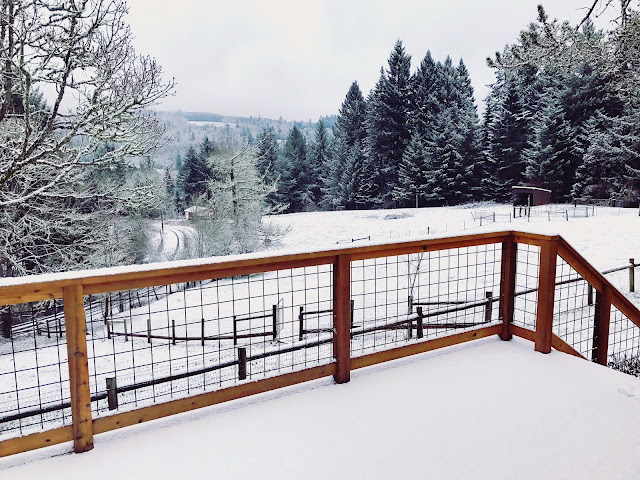 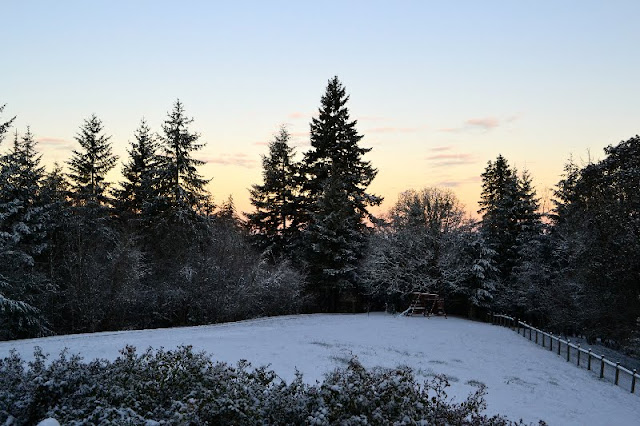 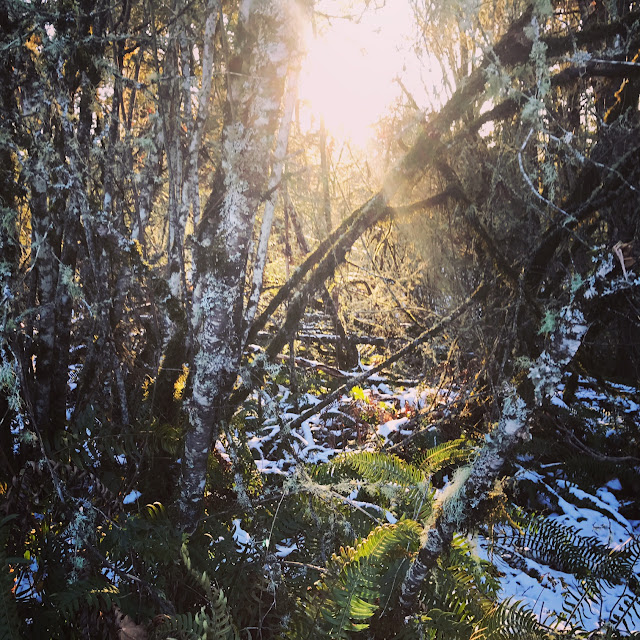 After we got the cows closed off 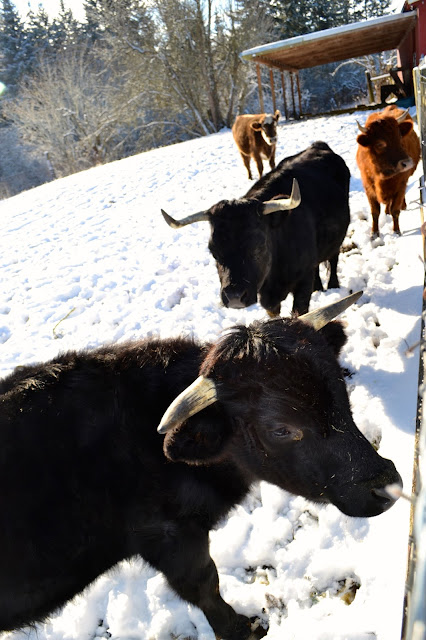 we opened up the pasture and had a fantastic sledding hill right on our own property! 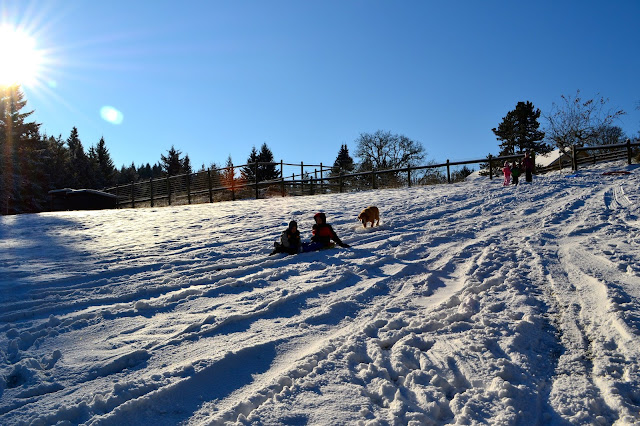 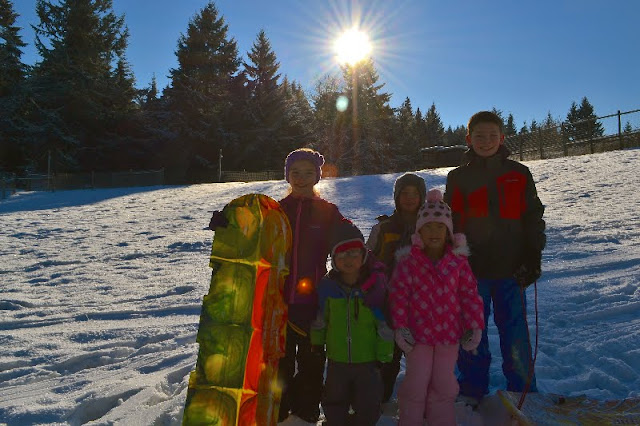 The goats in the snow were one of the cuter winter sights around here,

…as were the cows 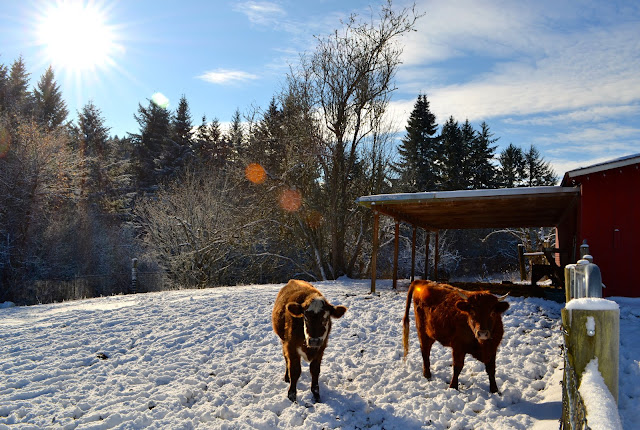 The cows really don’t seem to mind it. They look very simple as they just stand, staring straight ahead, and get blanketed in snow. 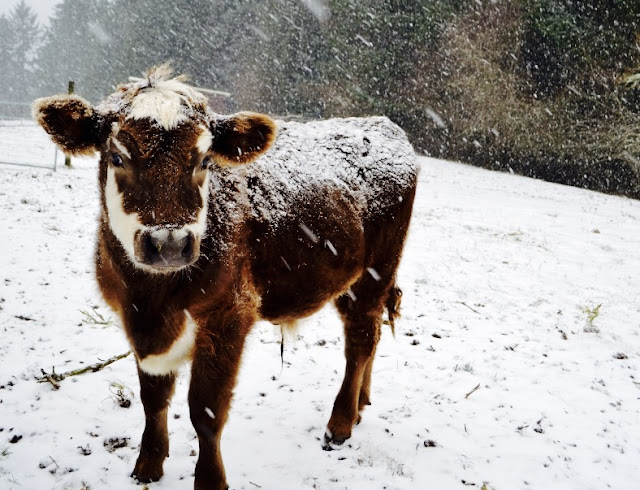 Brody and I got out on some “farm walks” even in the ice and snow, meaning we walk (or run if it’s not too slick) from the house to the barn and back, from the house to the end of the driveway and back, which equals .27 miles. I usually try and get 3 miles in, but Brody-the-behemoth-Golden-Retriever usually poops out about half-way through. 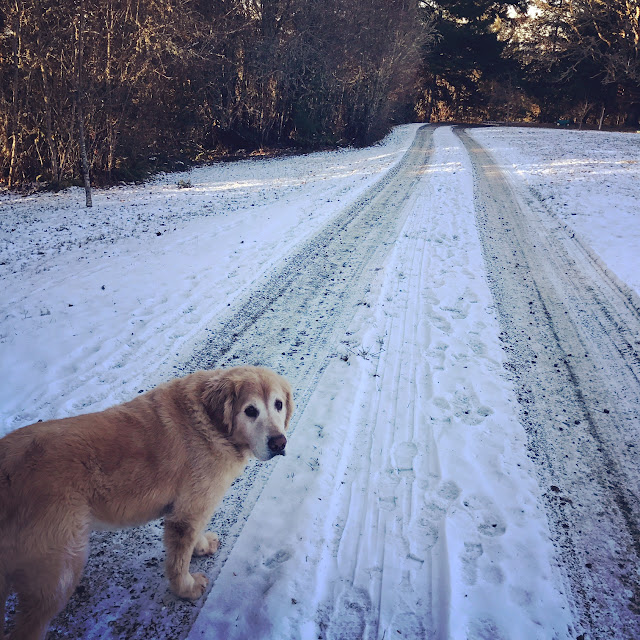 We completed the annual (dreaded) task of pruning our six apple trees, two pear trees, one plum and one cherry tree. I actually pulled my weight this year and did about half myself. 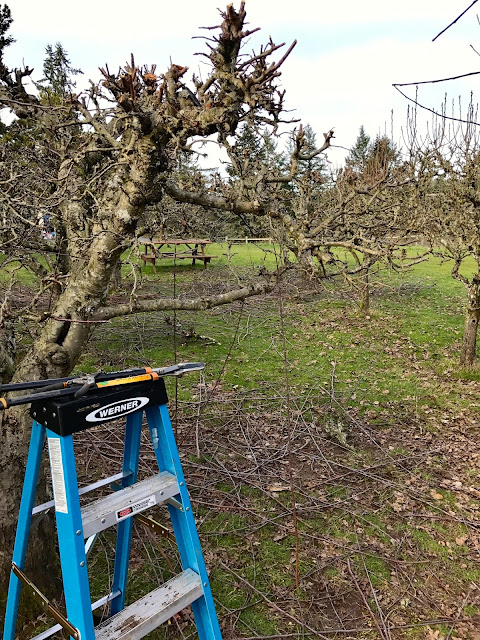 The Lowlights:
*Having 25 hens and collecting only 1-3 eggs per day. (Thankfully production is ramping back up.)
*Hauling water for the cows from the house to the barn for days on end. (With temps below freezing we have to turn the water off to the barn so the pipes don’t burst. Ask me how we learned this.)
*ANNABELLE (see below) 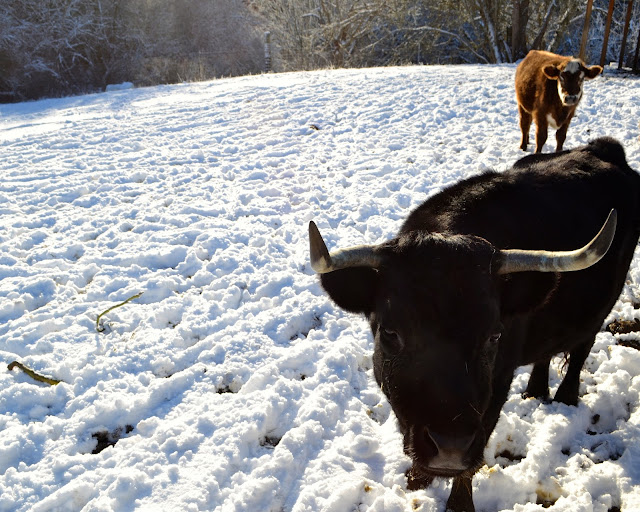 We’d had Annabelle for a year and didn’t know what to do with her. She was supposed to be pregnant when we bought her, but wasn’t. She was 10, and her heat cycles weren’t very regular. She declined to be loaded in a trailer to be taken to a bull last summer so we missed that opportunity. This winter had been hard on her and she was moving slower, not eating as much, and I had seen her fall a couple times. My inexperience with cows did not allow me to know if it was just her age or if she was truly ill. I now believe I should have called the vet.

The day after we returned home from Hawaii in January with a million other things to get caught up on, I noticed she was in heat and so decided to seize the rare opportunity and called an AI (artificial insemination) tech. She came out that evening and did the procedure. Our plan was to give Annabelle this opportunity to get pregnant, and if it didn’t take, to butcher her with her son in April. I loved this cow, but couldn’t justify keeping her as a pet. We’d already fed her for a year with nothing to show for it.

Before we could even determine if she was pregnant, we walked out to her broken body wedged between a tree and fence. It was a bizarre sight that we can’t really account for. Somehow she had fallen, though why she was trying to pass through this narrow space is unexplainable, unless she felt like she was dying and was trying to get to a protected place. We think she either broke her neck or suffocated in the deep mud. It was horrific. 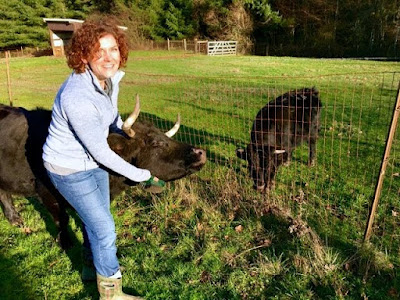 I sobbed face down on my bed in a way I hadn’t done in years. I allowed myself a good five minutes and then pulled it together. She was the friendliest, loveliest cow I could ever hope to own. She came to me that way and I have no knowledge of how to gentle a cow on my own. But with my girl Nutmeg, I’m sure going to try now.

* I have permission to buy six new chicks – we’re just waiting for the weather to warm up a bit since they’ll be living in the barn.
*We plan to raise our second batch of meat chickens – this time in a chicken tractor that Caleb is going to build.

The garden, which so recently looked like this, will soon (with a lot of preparatory work) be ready to plant. 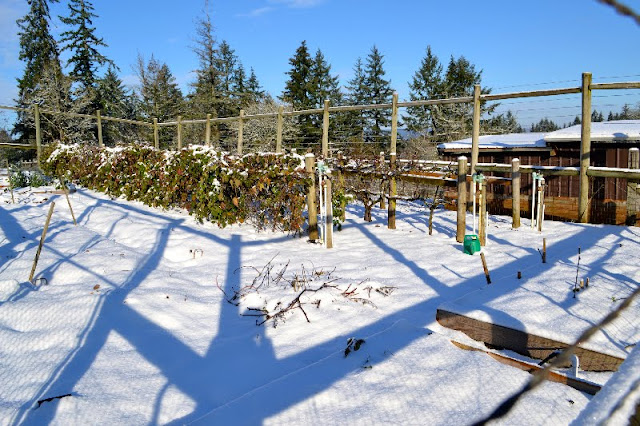 Nutmeg should be calving sometime in April.
And beautiful sights like this give me hope for the future, no matter what it holds. 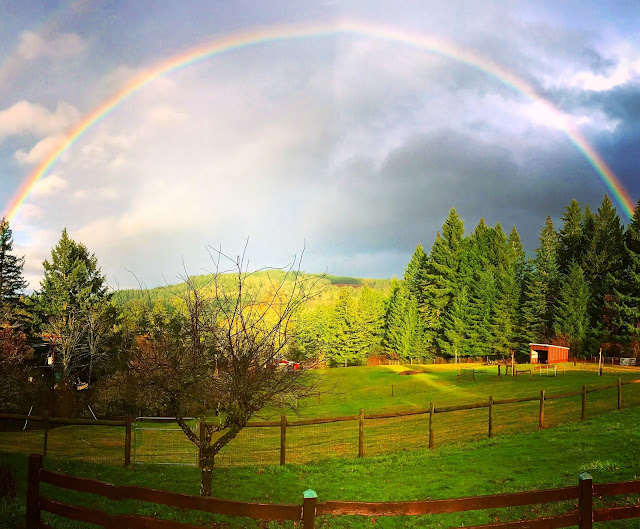