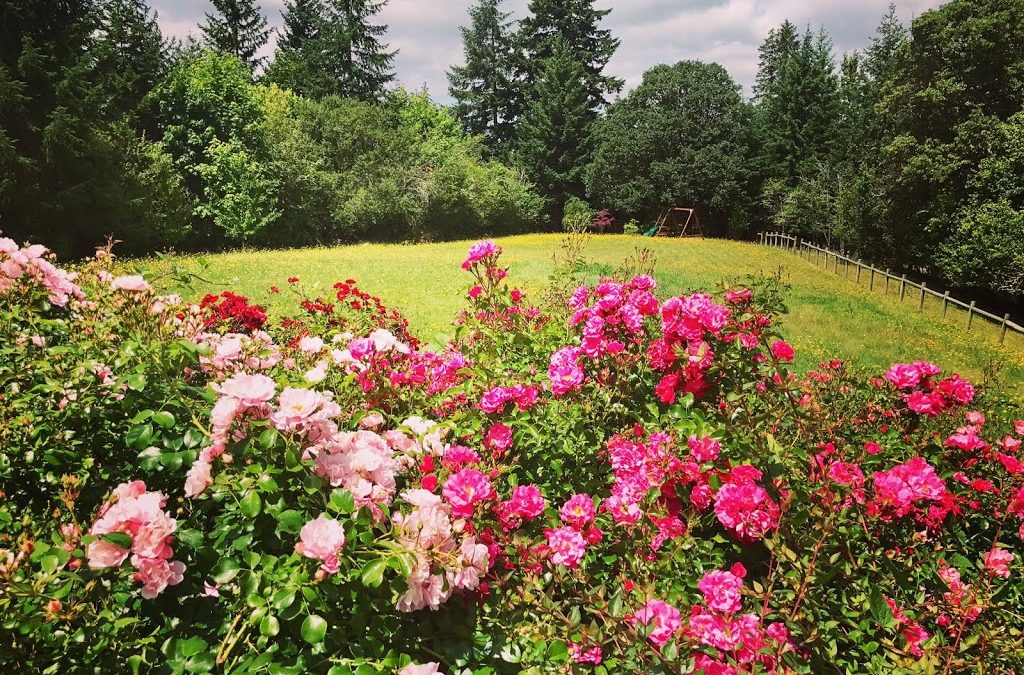 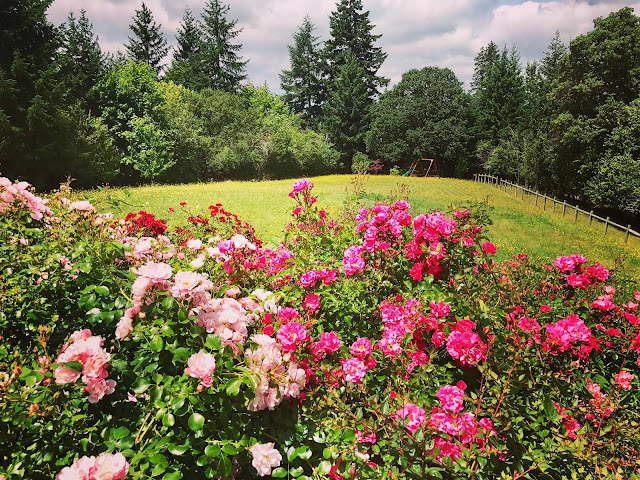 “It was June, and the world smelled of roses.
The sunshine was like powdered gold over the grassy hillside.”
~ Maud Hart Lovelace
Summer is here. Real summer. 80 + degree-summer.
Oregon-strawberry-summer. 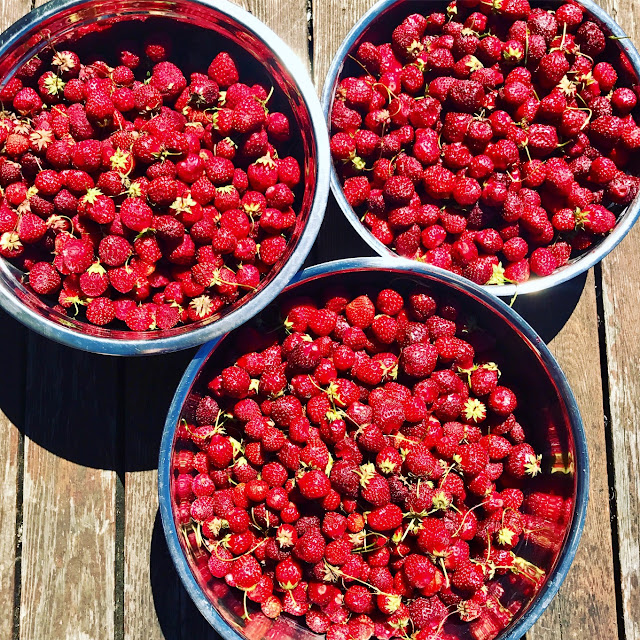 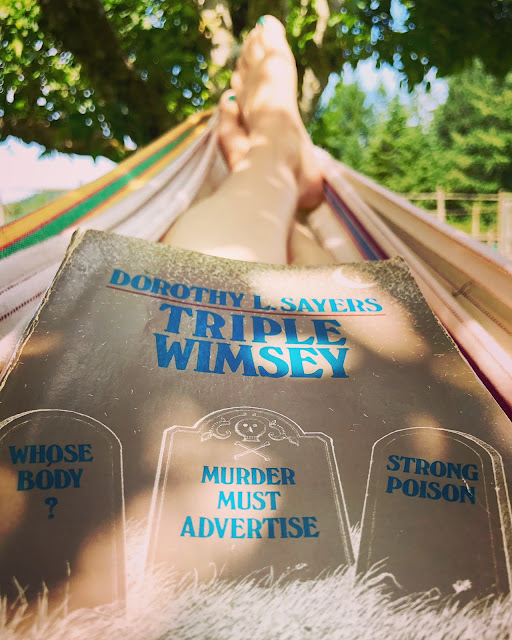 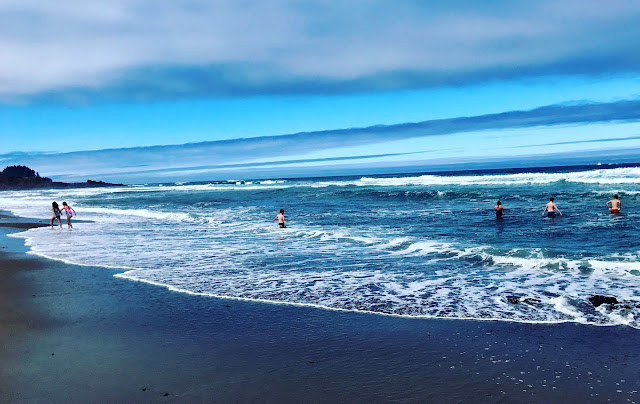 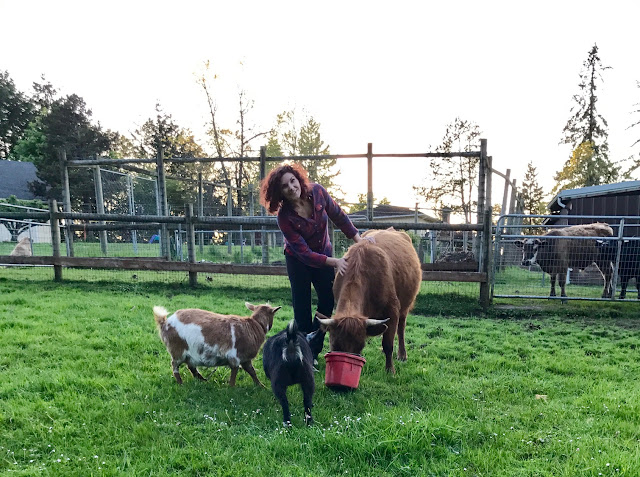 We headed into summer with some excitement. In May, our red Irish Dexter, Nutmeg, gave birth to a perfect bull calf. 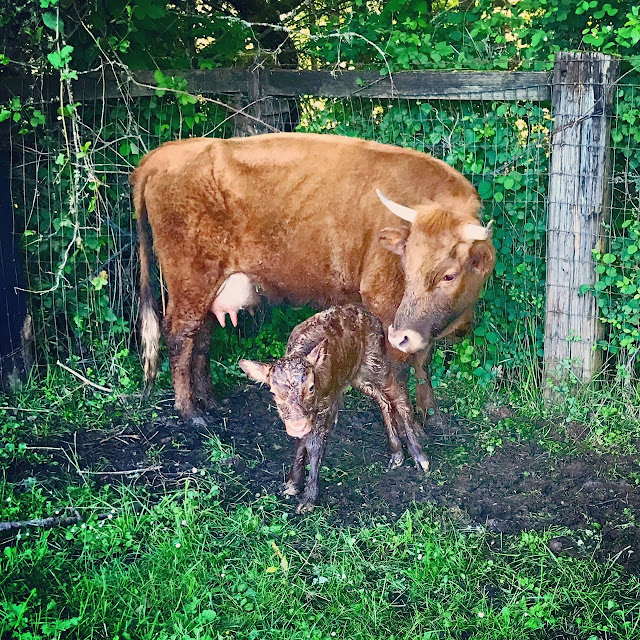 Due to some (mis)adventures in cow fertility, it had been 3 years since calving occurred on our farm. Because Nutmeg is small and this was her first calf, I was really nervous about it. Caleb and I came out early one morning to find her in labor. Progress appeared to be slow, so I kept my finger on speed-dial to our farm-vet and eventually Caleb ended up helping to pull the calf out. It made him late for work, but I told him he was probably the only person in his office who had pulled a calf that morning. I love my gentleman farmer. 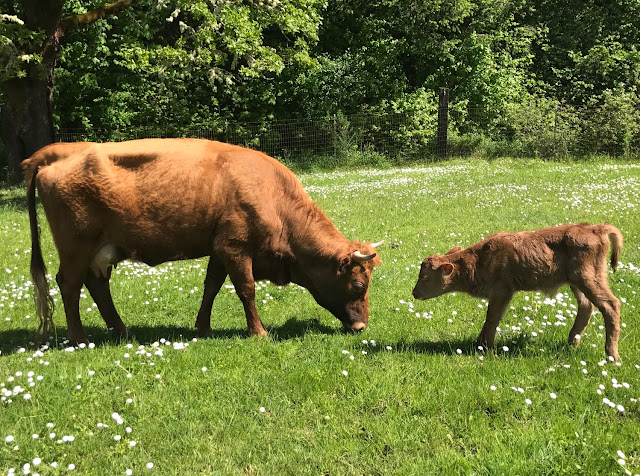 Since the bull was black, we were very pleasantly surprised that our calf was red, or actually more of a strawberry blond. He is truly beautiful. 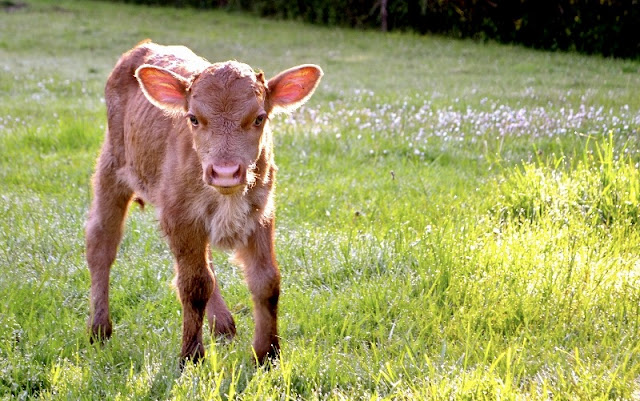 Our only disappointment lies in the fact that he is a he. Because when you’re raising beef cattle the hes don’t stick around for longer than two years. Our previous two calves had also been bulls and we longed for a calf we could raise and spoil and name and love and keep. We briefly considered keeping him as a bull, but since his mom is our only female, that didn’t make any sense. So Caleb and our neighbor made him a steer, and we will enjoy his cuteness while we can.

For two years we have fantasized about clipping our chickens’ wings. They have 8 acres to free range on but mostly prefer to be all up in our business: dust bathing in the flower beds around our house, eating the plants near our front door, and pooping on our driveway and front walk.

I’ll never forget when we were remodeling our kitchen and our contractor was storing his tall, standing tool box in our garage. One of our chickens was obsesssed with nesting in his box of nails. I kept booting her out and she kept returning. Finally one day he walked into the house with a look of distaste on his face, held an egg out, and said, “It’s still warm.” I sent him home with a complimentary dozen eggs, including that one, and told him to tell his kids it had been laid in his nails.

I have felt the need for more flower-beauty in my life, but knew I had to ensure the chickens would not dig up my flower beds by first clipping their wings. This would ensure they could free-range in the pastures but not fly up over the fences to be in our yard space. We watched a Youtube video, pulled them off their roost one-by-one under the cloak of darkness, and clipped those suckers. 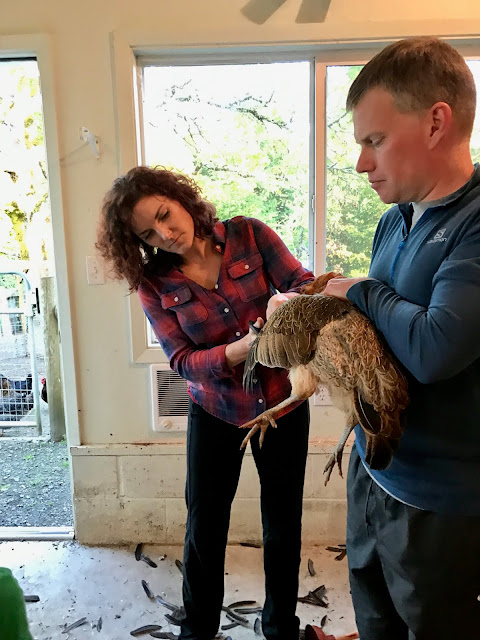 Feathers are like fingernails – they have no feeling, so no pain. We just clipped the eleven flight feathers half-way up. It was suggested that just clipping one wing was enough to hinder flight, so that is what we began with. The next day, all the chickens were out as usual, so we snuck back in that night, plucked them off the roost again, and clipped the other wing. 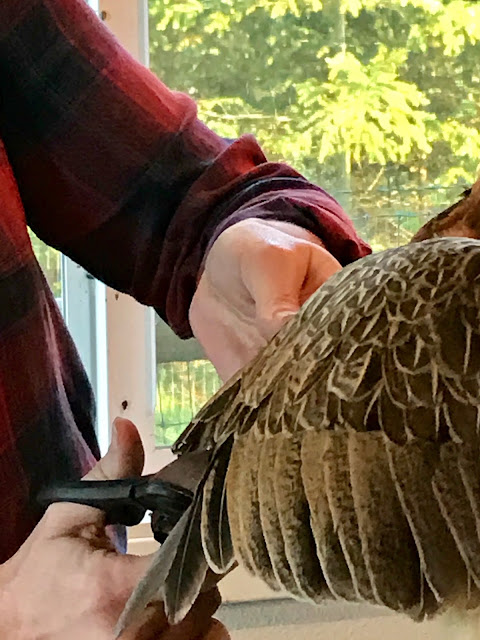 Wing-clipping will likely need to be done yearly, but was so much easier than we expected, and has literally changed our lives with chickens. I have lovely flowers growing near the house, the kids can go barefoot in the grass (watch the dog poop!), and the chickens are relegated to the pasture where they belong. We wish we had done it sooner.
Many summer glories still lay before us:
Sunshine, 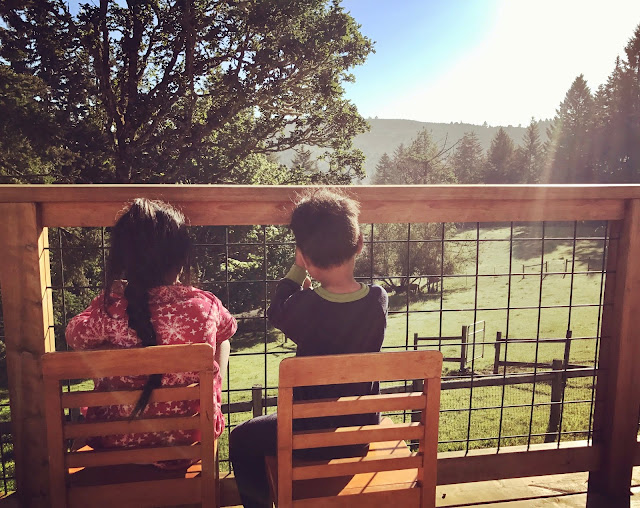 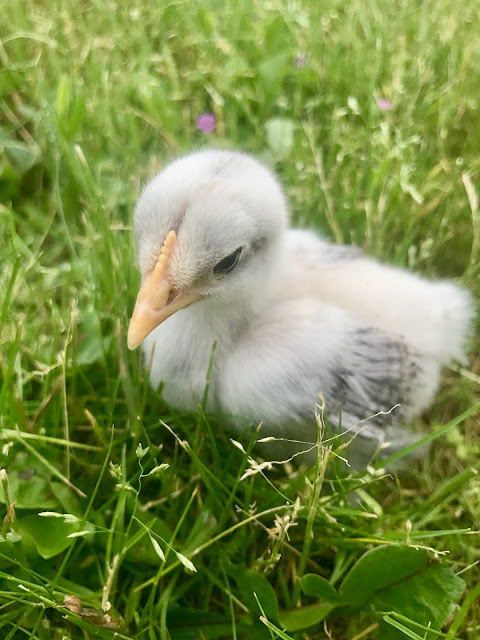 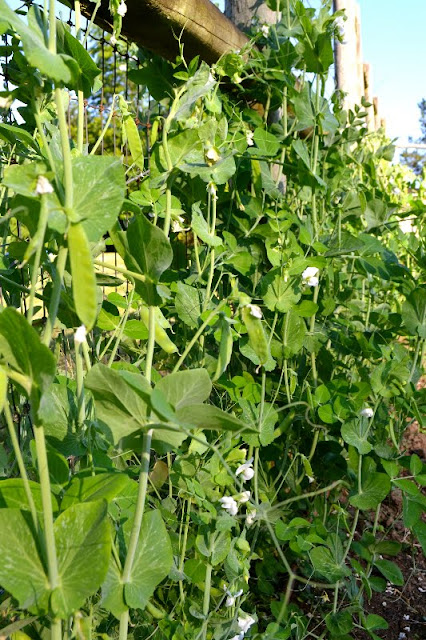 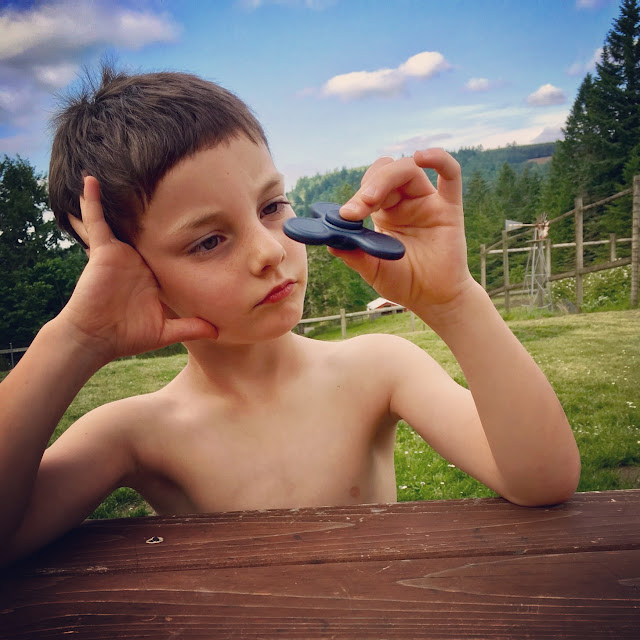 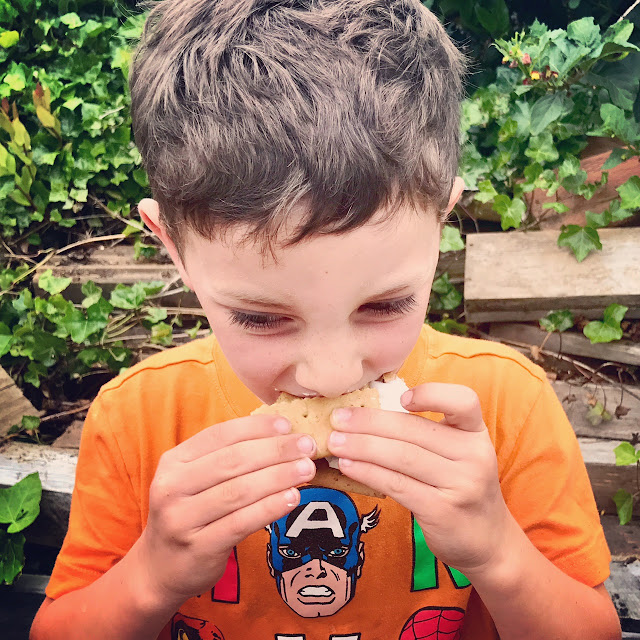 We can now scratch S-mores off, but we’ve still got a lot of adventuring to do. And we’re off…