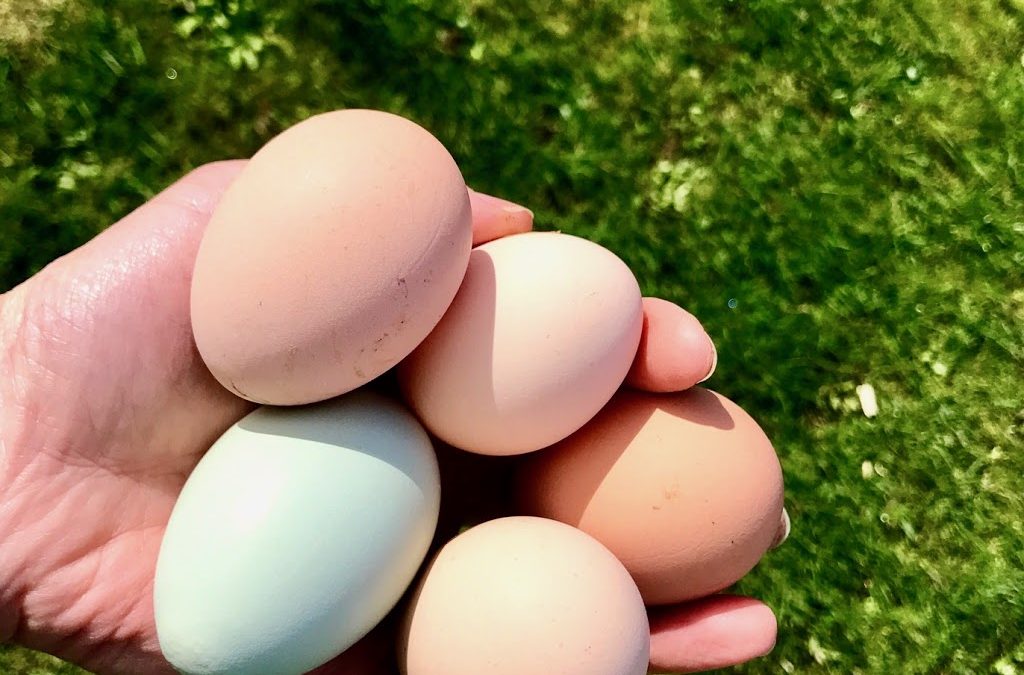 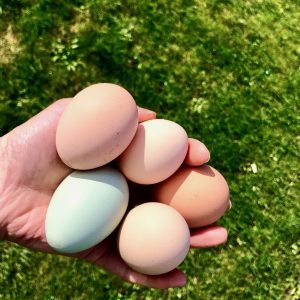 Summer was full of chickens: 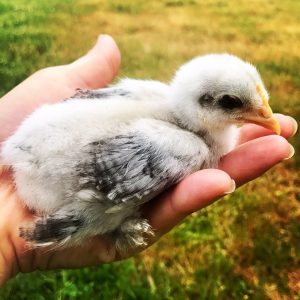 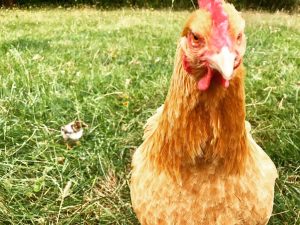 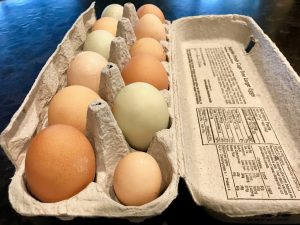 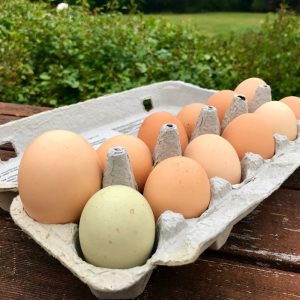 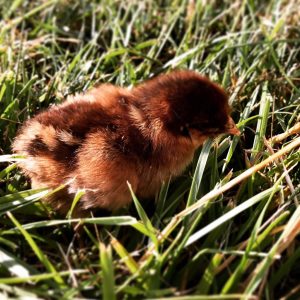 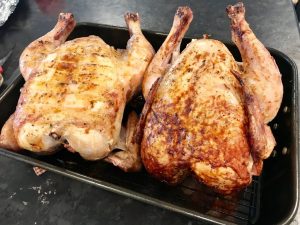 The chicken problem we deal with most often is broody hens. The natural instinct for a hen to want to hatch eggs leads her to sit on a clutch of eggs (or even just an empty spot if the eggs are collected). Our hens usually go broody in the barn and will quietly sit in the corner of a barn stall forever, unless 1) we allow them to hatch eggs, like this lucky hen got to do this summer, 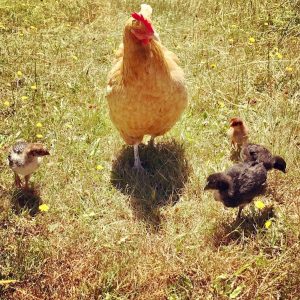 We put these two in the broody buster together. 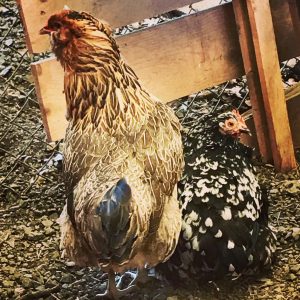 Hermione is the ameracauna on the left. She is one of our original chicks from 3 1/2 years ago, back when we still named our chickens. The gal on the right is a speckled bantam cochin who we’ve also had 3 years. She is named after one of the Ingalls sisters from Little House on the Prairie, but I can’t remember which one. Bantams are the smaller version of the standard breeds (just like dogs have “toy” versions). In their three years at Good Gifts Farm, she and Hermione have never palled around or been particularly close. However, after their three days in the broody buster together, something remarkable happened. Hermione, who so wanted to hatch chicks, “adopted” the little bantam as her chick. After their release, they were inseparable. Hermione would stand guard while the banty pecked and scratched for food. She would not leave her side for a second of the day. And for several nights in a row, this was the scene on the roost in the coop:

Hermione tucking the bantam under her wing to sleep, just like a mama would do with her chick. The whole situation brought us a few chuckles and much joy. A couple months have passed and their relationship has returned to normal.

I know they are adorable and fluffy at one-day old, but I guarantee you, by 8 weeks, they are anything but.

Instead of raising them solely in the barn as we did last summer, we really wanted to get them out on pasture, both for their own health and for sanitation. They were in the barn under the heat lamp for three weeks, 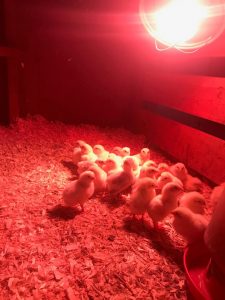 and then we moved them into an old mini-coop that Caleb converted into a chicken tractor by putting wheels on it and placing it in the pasture. 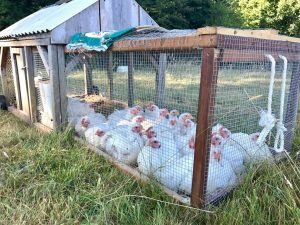 Every day he moved the tractor a few feet to give the chickens fresh grass to peck at and poop on. We still have a few kinks to work out in the watering system (keeping them hydrated was a full-time job for me during those few weeks), but overall this was far superior to keeping them in the barn.

However,  Caleb and I are having serious qualms about raising cornish-cross again. We had to slaughter a week early, at 7 weeks, because we were going on vacation and didn’t want our farm-sitter to have to deal with them. Even then, their skin was splitting from their rapid growth and several had gaping wounds under their wings where the heaviness of their breasts had caused the skin to tear. I know it sounds gross, and believe me, it was. Two dropped dead a week before slaughter.

Cornish-cross are designed to grow rapidly with the most-efficient feed-to-weight conversion, and they have the white meat and huge breasts we’ve grown accustomed to (all commercial meat chickens are cornish-cross).  But they are so, so unnatural. Their legs break or their heart stops if they are allowed to live beyond a certain age. They develop bed-sore type wounds on their breasts because they are always laying on the ground. And they don’t exhibit “normal” chicken-type behavior to peck and scratch, to forage, or to roost at night. 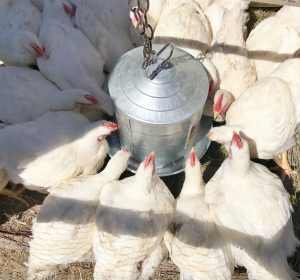 Even though we set up a system for them to forage and “range”, they could hardly walk. They waddled over to the feeder (where they would sit down to eat) and then lay down all day long. Next time, we have decided to give Freedom Rangers a try. They take four months to raise (rather than 8 weeks), so are not as cost-efficient. But they are true chickens that live and grow the way God designed them to, and from our experience, that may be priceless.

We are raising our own meat and eggs, largely because we want to ensure the animals are treated humanely and that they are fed quality feed, both for their own health and for ours. In the past I was part of a chicken feed co-op with organic feed from Montana shipped here to Oregon at a wholesale price – $28 for 50 lbs. Then I discovered a non-gmo, plus-*many*-organic-ingredients-feed from California at a local pet supply store that was $18 for 40 lbs. I decided non-gmo was a larger priority than strictly organic, and was happier with that price, so I quit the co-op and bought two bags at a time from the store. But this summer I heard from a homesteading friend about a man in Corvallis (30 minutes from us) who is sourcing local ingredients and formulating and milling his own brand of non-gmo, high-quality chicken feed for $18 per 50 lb bag. I knew it would be well-worth a trip down to Mosaic Farms. I filled my van with 700 lbs of feed (both layer for our hens and grower for our meat-chickens), to last 3-4 months. 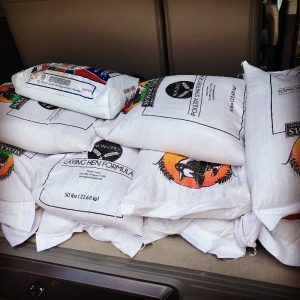 All the other feed I’ve bought is compressed into gray pellets that resemble nothing edible. Mosaic Farms’ feed is gorgeous. I think I could feed my kids on it in a pinch, though hopefully it will never come to that. I am very thankful for this wholesome, local way of feeding our chickens. 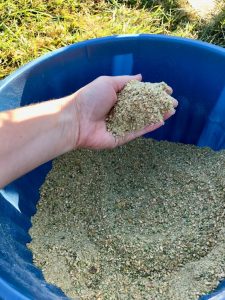 Summer is winding down, and as always, our mama hen abandoned her chicks at 6 weeks. For some reason, that is the age when mamas decide chicks are ready to fend for themselves. Except they really aren’t, so we get to step in and help and worry and feed them, and make sure they are in the barn at night. Ah, chickens… it’s always something… yet, we always come back for more.
Please follow and like us: