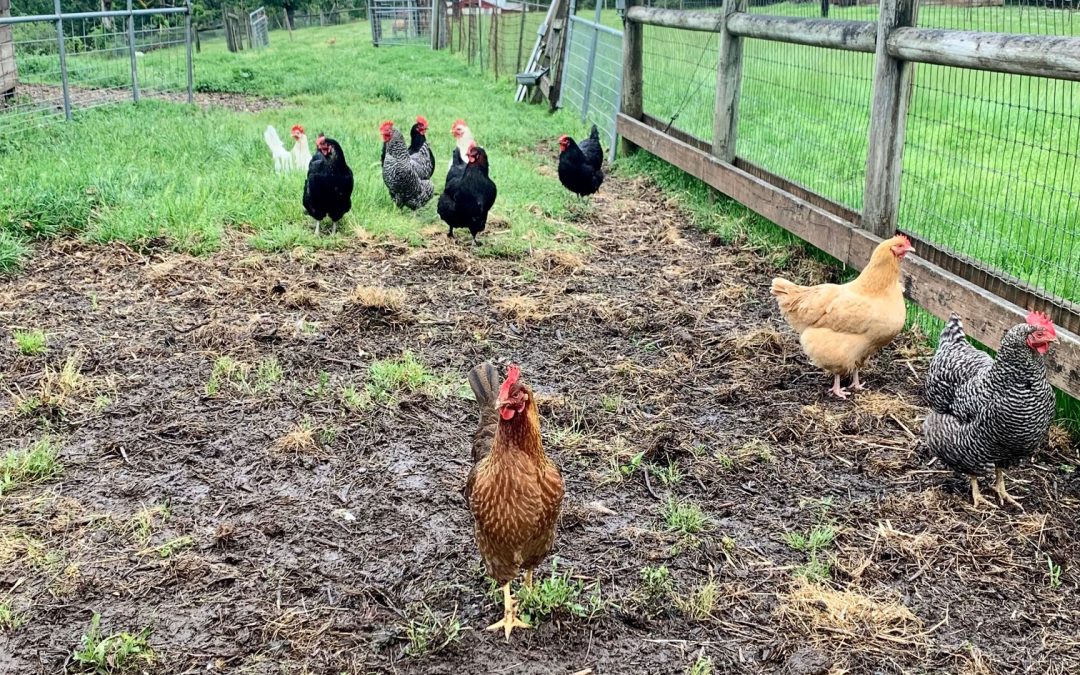 Hello from June 17th!  Extremely-rainy-May has merged into torrential-downpour-June, and I have lost track of time. It is a stinky, muddy mess on the farm. Seriously. I have no reflections except that it needs to dry out ASAP! Things I’ve noticed about this wettest spring in 81 years: my huge hedge of shrub roses, normally gorgeous this time of year, is not yet blooming. Our fruit trees that had ample blossoms in early spring have set very little fruit. (I suspect pollinators were not out in the stormy weather.) The undergrowth  along our driveway and in our our uncultivated areas looks like a temperate rainforest. This is the time of year when the sunset moves north and becomes visible through our treeline. Most years I am continuously calling my family outside to gaze in wonder at the beauty before us. Yet this year we have had only one (one!) stunning sunset. The only color in this year’s pallet has been a watery gray. 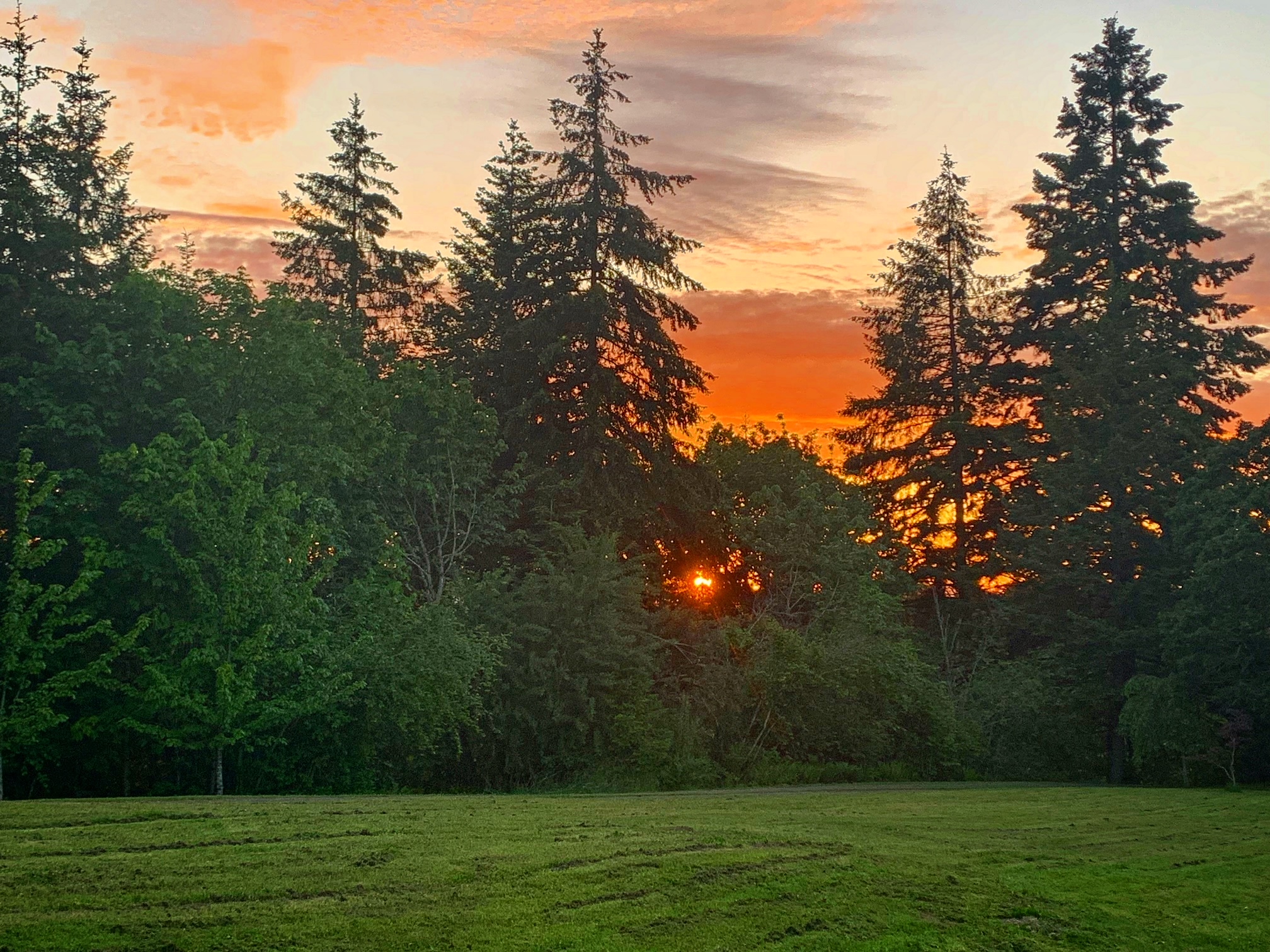 Mid-May we had a dry weekend, and we all worked hard to get our plants in the ground. I had started seeds indoors for the first time and they were getting leggy and past the point of needing to be planted. 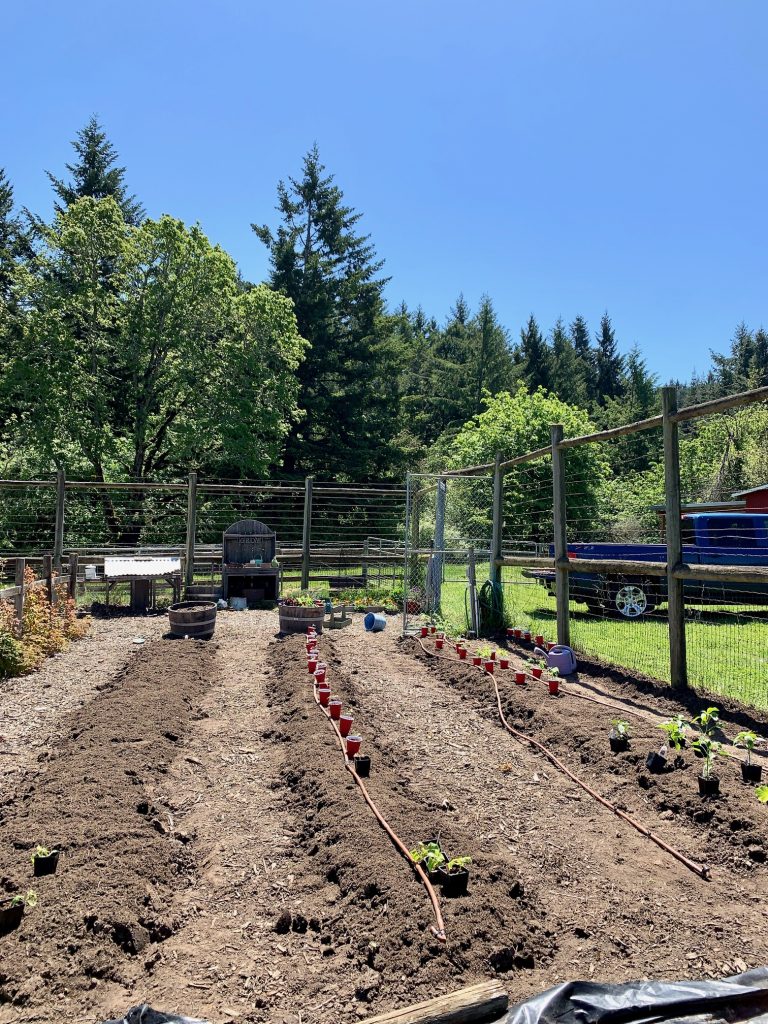 There has been a strange national-phenomenon this year of BAD potting soil. I heard about it in two different homesteading podcasts  and It happened to me! I started half my tomatoes in an organic brand from Fred Meyer (can’t remember the name and I threw out the bag) and the other half in Miracle Gro Organic from Costco. (The Miracle Gro was the good one.) These seeds were planted the same day and here is the difference: 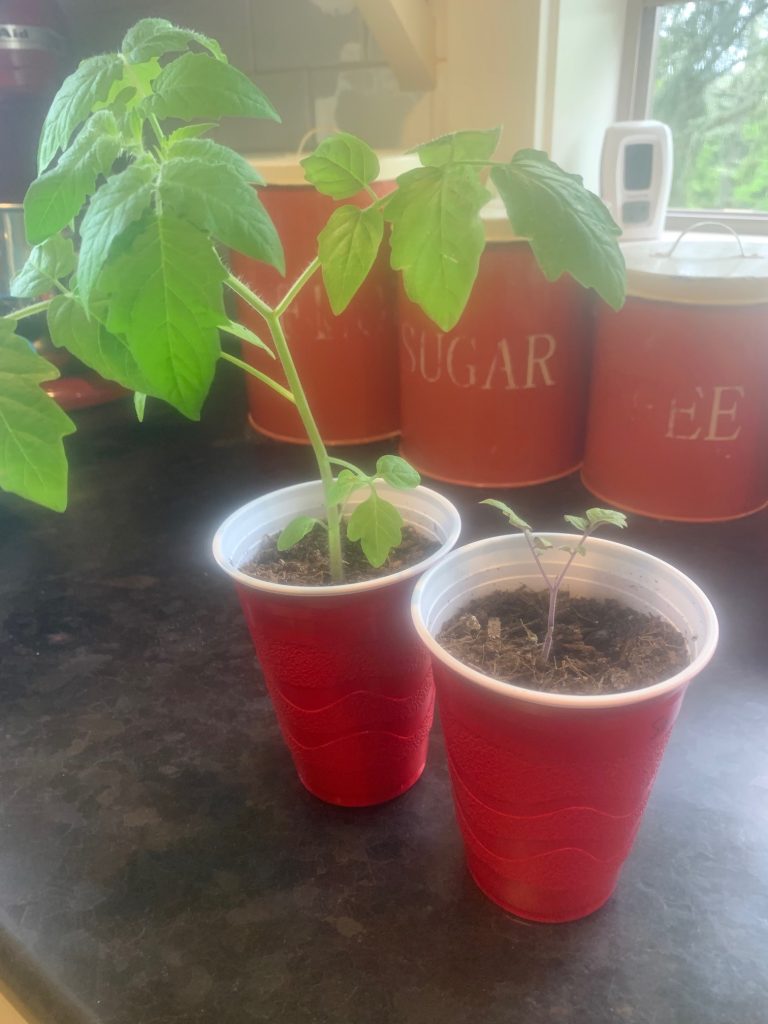 Seeds quickly sprout but then stunt and yellow. I ended up having to buy new starts for all of my San Marzanos, which are the canning tomatoes I grow. It sounds like the issue has arisen because companies have had to change their soil formulas due to supply-chain issues and that  tomatoes and peppers have been particularly effected by it.

I have mixed feelings about my first seed-starting experience. It is fun to have something “garden-y” to do in winter. It is enjoyable to pick out the exact seeds I want to grow. The prepper in me feels good knowing I have a supply of seeds that won’t go bad for three years (in case stuff hits the fan and I can’t get the starts I need from local nurseries). But it was not cheaper to buy seeds, and I was messing with those starts every single day for three months. I was turning them around in the window each day to get even light. I was transplanting them to larger containers. I was watering them. I was moving them outside and back inside every day to harden them off for planting. And then several didn’t survive the move into the garden and there was the potting soil issue, so I had to buy a bunch anyway. So while I love the idea of starting seeds, when I saw all the varieties I normally grow at Wilco for $1.59 per plant, I wondered if this is one thing that, for me, is worth outsourcing. We can’t do everything ourselves and there is nothing wrong with selectively outsourcing.  I’m still considering what I’ll do next year. 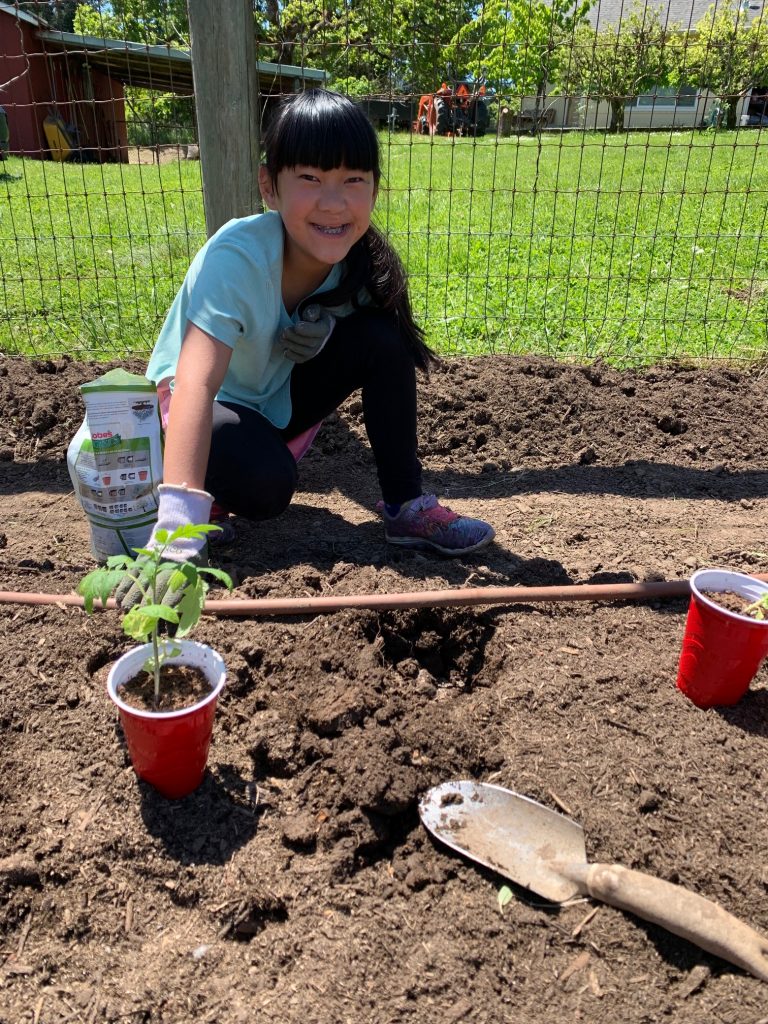 Every year we raise Cornish Cross chickens, which are the commercial variety bred to have huge, meaty breasts and mild white meat. This is what nearly all Americans eat when they eat chicken. Yet every year we’re amazed (and disgusted) by how unnatural they are – both in structure and growth rate. In eight weeks they can grow to eight+ pounds, and they must be harvested right around eight weeks or they will begin dropping dead from heart attacks or their legs will break because they can’t support their weight. In fact, this year we pushed butchering out to nine weeks and we lost one at eight weeks and two days. 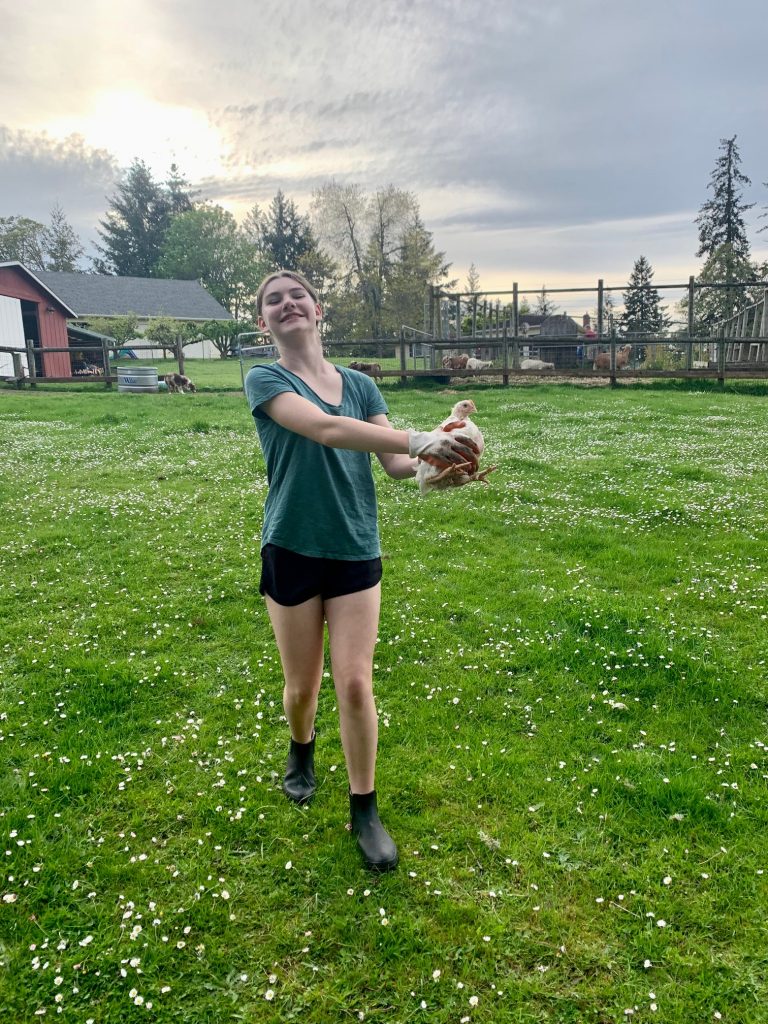 Two years ago we decided to try Red Rangers, which are a more “natural” meat bird but take twice as long (4 months) to grow out. Our assessment was that they took more time, more expense, and produced a darker, gamier meat that we didn’t care for. (Everyone cheered when I recently told them we were eating the last of the Red Rangers.) So we are back to Cornish Cross. Even though they are frankenbirds, it is gratifying to commit only eight weeks to them and then have a freezer full of quality-fed, humanely-raised, pastured meat. 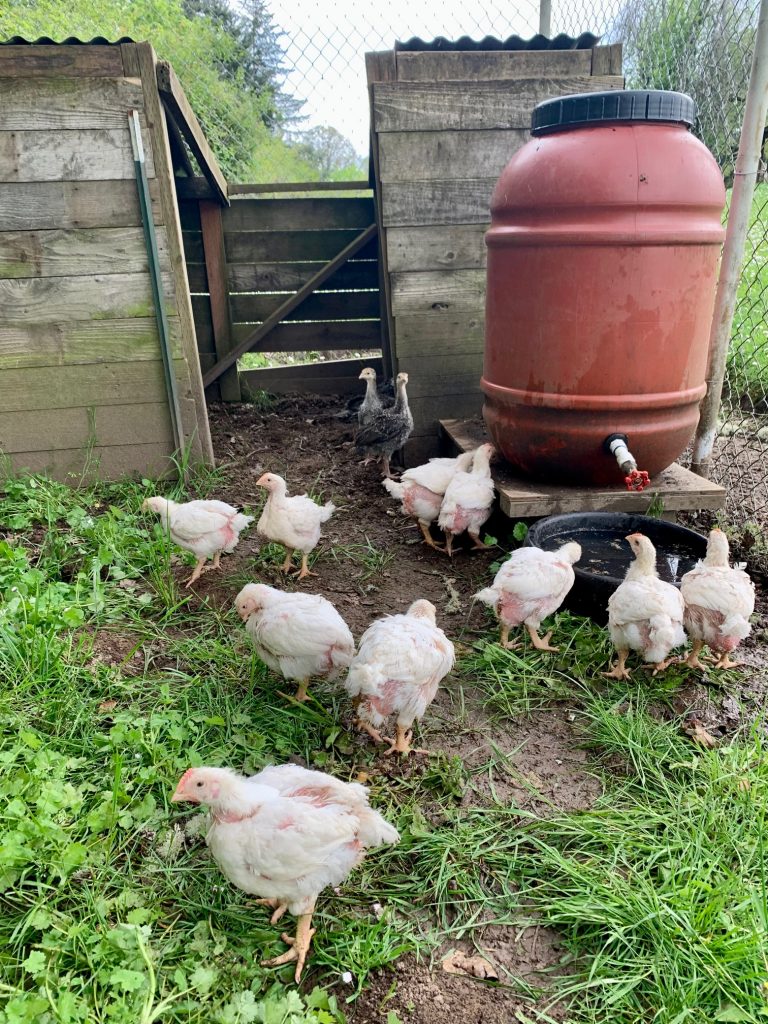 After raising the Cornish Cross in the barn for four weeks, we moved them (and the turkeys) out to a huge chain-link coop in the pasture. The excessive rain made this whole set-up, which has worked wonderfully the past few years, a disgusting mess. The amount these birds poop is unreal and we just couldn’t dry it out. Gag.

Years ago, before moving to our farm, we helped some friends of friends butcher meat chickens and it was quite an experience. I valued watching my kids participate in the process and learning about each step myself. Caleb and our friend slit one hundred chicken throats, so he has slightly less fond memories of that day. When we began raising birds ourselves we decided it was worth it to drive to Mineral Springs Poultry Processing in Willamina and pay the few dollars per chicken to have it done. We have done that every year and have never desired to do it differently. Again, outsourcing is sometimes a valid and worthwhile option. 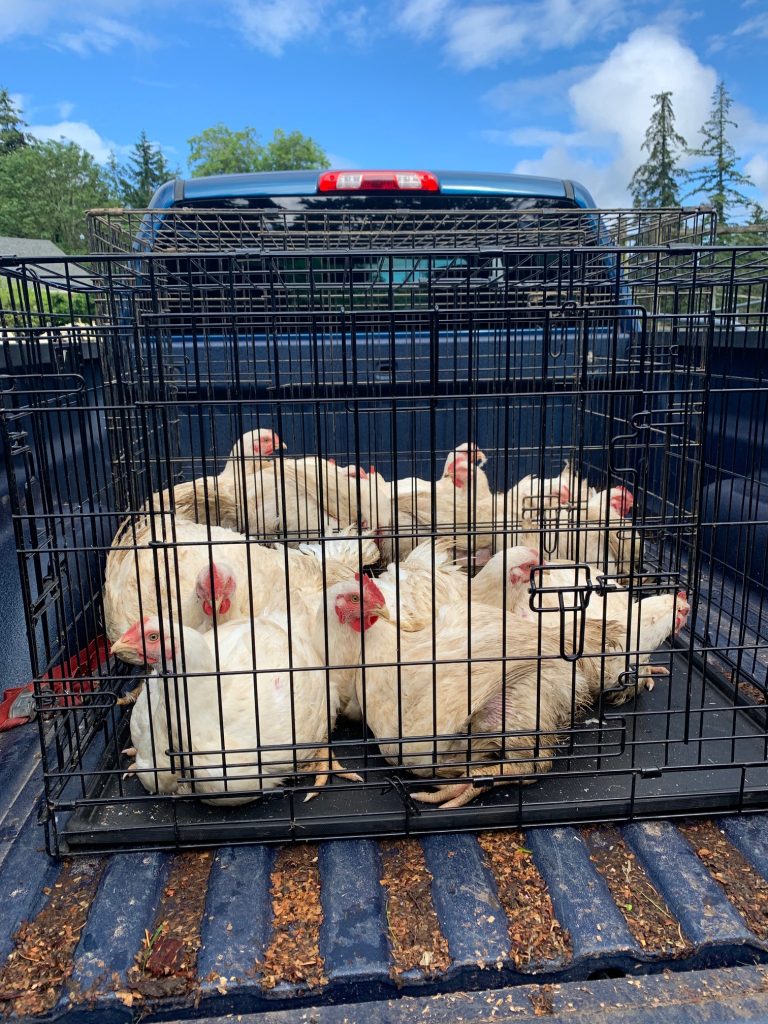 Fast forward nine years from that first butchering experience, and I am increasingly interested in learning new skills that will ensure we are even more self-sufficient. I want to know how to butcher a chicken by hand if I ever need to. I want my kids to know and understand the entire process from cute fluffy chick to freezer. These thoughts were swirling in my head when, the same weekend we brought our meat birds home, I noticed that two of our neighbors down the street had new chicken tractors in their yards. I asked if they also had just gotten meat chicks and if they were planning to butcher them themselves. When they said yes and yes, I asked if we could join them. They were more than generous in allowing us to participate: using their equipment, helping us butcher our birds,  and teaching us their newly acquired skills (for it was their first time butchering as well). 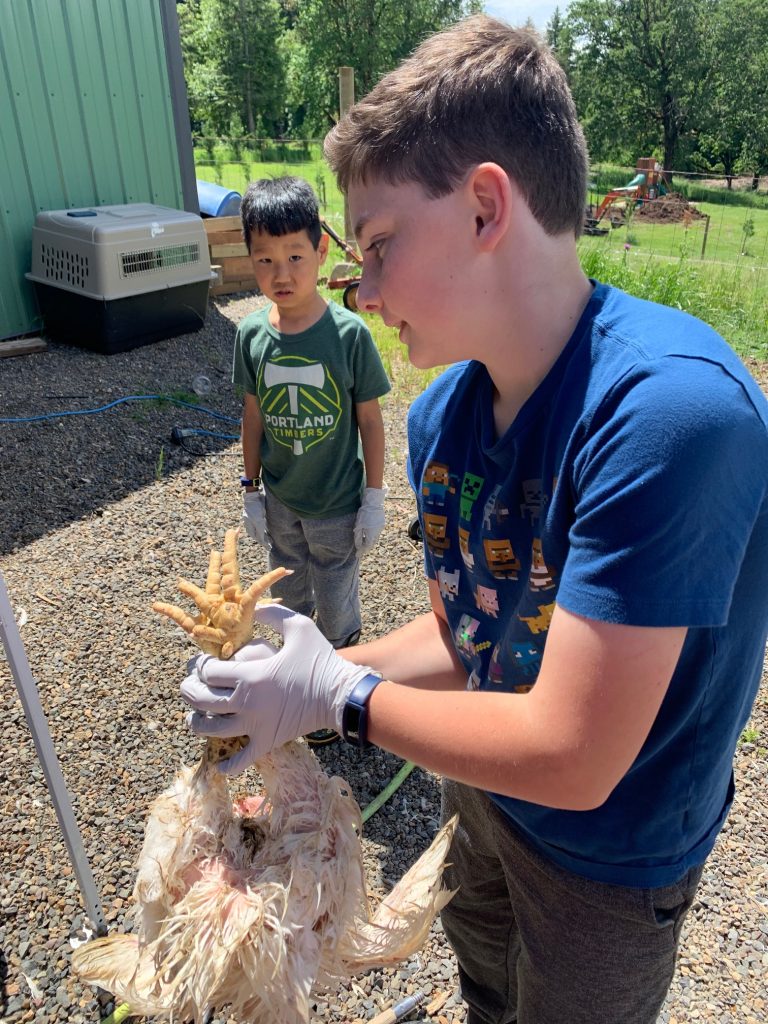 This was the first bird and Graham quickly went from worried to enthusiastic participant.

It took about 2 1/2 hours to butcher our 17 birds. Caleb slit the throats. Elisabeth and Charlie scalded them and put them in the plucker (the most amazing machine ever!). Rosie and our neighbor Heather cut off the feet. Our neighbor Zack taught me how to (semi) quickly and efficiently eviscerate the chicken. Graham collected the livers for the dogs. The men bagged them up and I had the joy of weighing and labeling them. None were below 6 1/2 pounds and our heaviest was just over 8 pounds. 125 pounds of chicken is now in the freezer! The most satisfying part was getting to know our neighbors and sharing camaraderie with people who value this homestead life, pastured meat, and old fashioned skills just like we do. It was a great day!

Last fall we had our first-ever rat takeover in the barn. We’ve always had barn mice which we would see scurrying around at night, but they were actually kind of cute and never bothered us much. Then the mice disappeared and all of a sudden we had rats: full-grown, huge, long-stringy-tailed rats. Because of the prevalence of chicken feed and livestock grain in the barn, they merely laughed at our baited snap traps. Before we knew it, walking into the barn at night was like entering a haunted house. Since it was October, I thought perhaps we should charge admission. Our dog (who is NOT a rat terrier) was able to grab a rat and kill it simply because there were so many. We got serious about removing all food sources (which was a huge pain) and setting up a choose-your-own-death scenario: electrocution, poison, snap trap, or death by drowning in a 5 gallon bucket. We caught 22 rats! It was sick.

Now, six months later, we have caught sight of two rats and we are not going to let things get out of control. Welcome, Pumpkin and Spice to the barn. 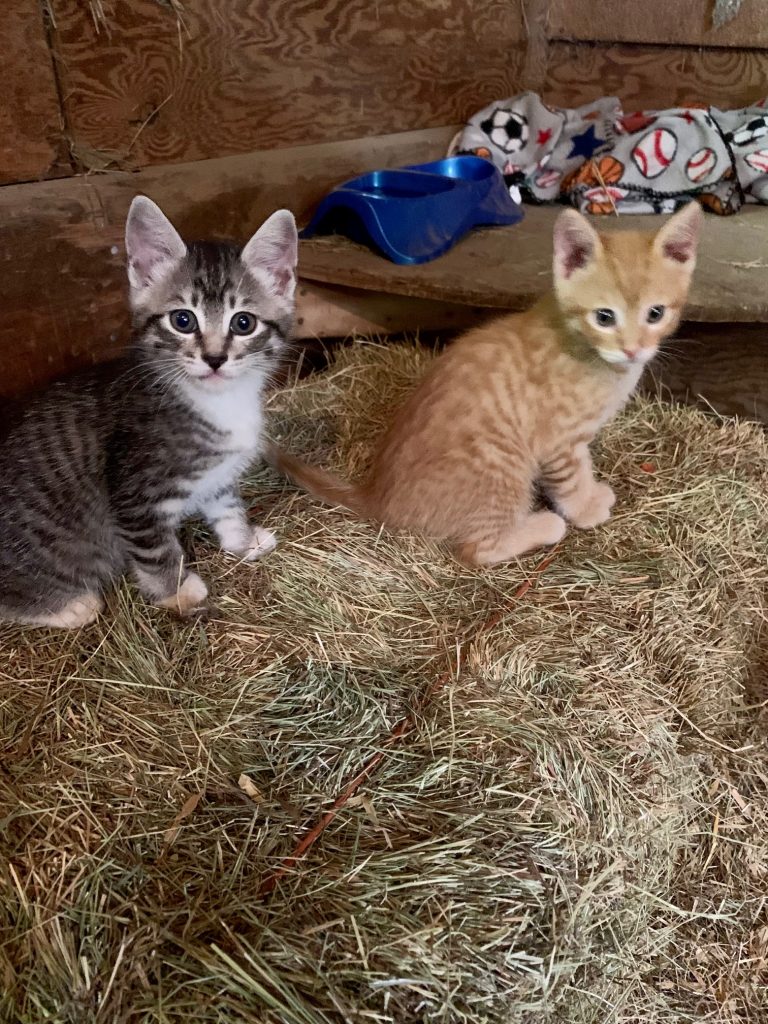 We didn’t want a true, feral barn cat, but rather kittens that would be friendly with us and could be raised around our chickens and would grow up to leave them alone. (They have already gotten a few pecks on the nose and give the chickens a wide-berth). However, the kittens are under no circumstance to become house cats. (In order to get them, I had to make Caleb a solemn promise, as we already have two of those). Even though they are too small to catch rats yet, I haven’t seen the rats since we got them. I’ve heard that just the presence of cats can cause rats to move on. While we were able to confine Pumpkin and Spice to a barn stall for the first couple of weeks, they now are uncontainable and have the run of the place, including outside. They are definitely living their best kitten-lives out there. And they are just the sweetest, cutest little things.

If you know me, you know that I am a complete dork over kittens. They are one of my favorite things in the world, and without the tempering of my moderate, practical husband, I’m pretty sure I have the potential to become a very crazy cat lady indeed. So on the off-chance that you enjoy kitten videos as much as I do, and this gray dreary weather is leaving you a bit down, I will leave you with a double-dose of adorableness to boost your spirits:

Hopefully next time I write, it will be mid-summer, hot and sunny, with my garden growing like crazy and the pastures all dried out. One can hope. 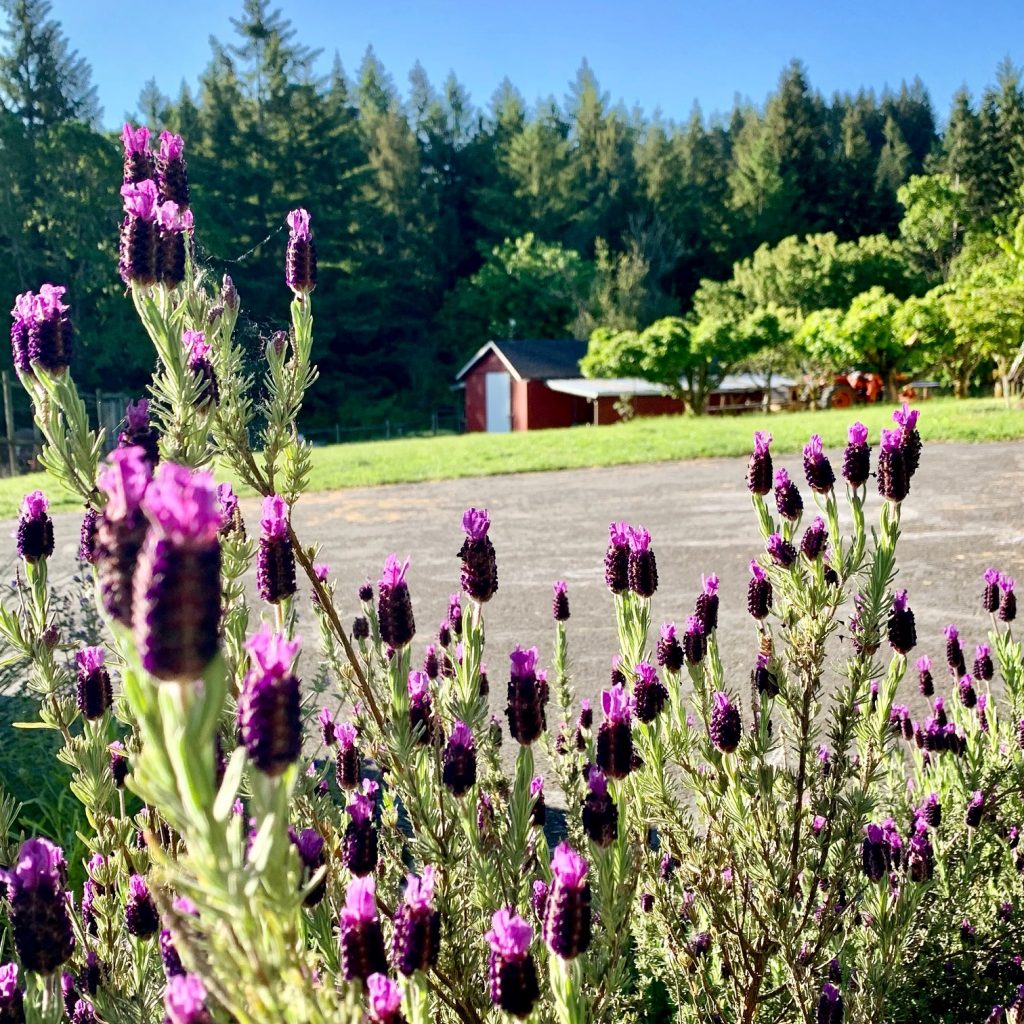