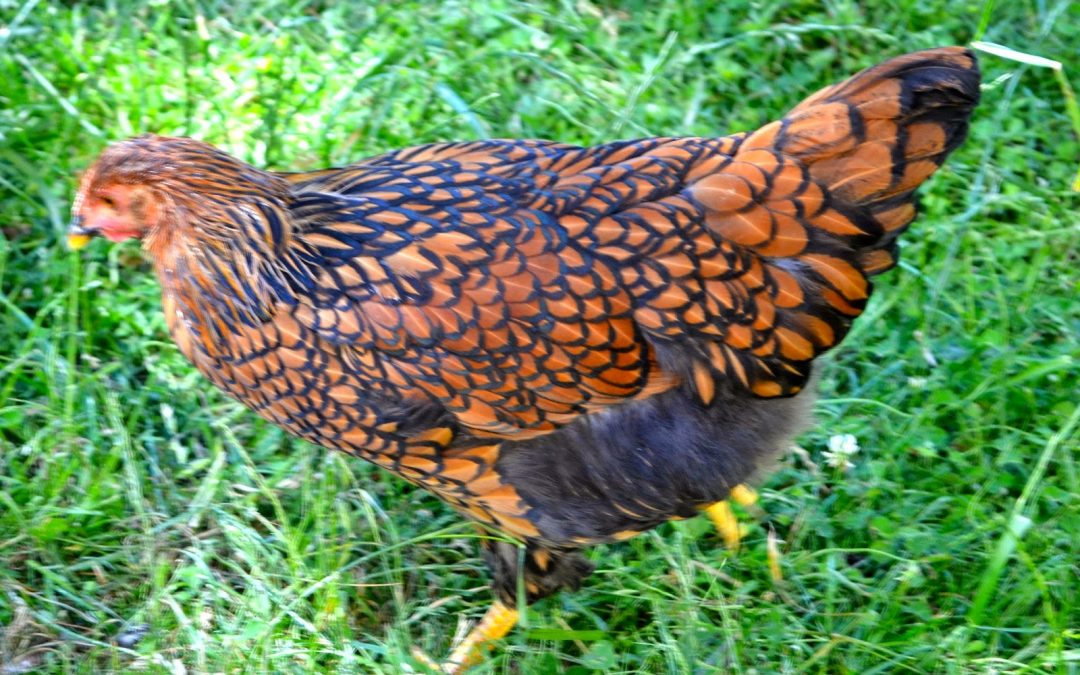 Surprises
A few things I did not know or expect about chickens:

* They are garbage disposals. I have a perpetual “Chicken Scrap” bowl on my kitchen counter and into it goes everything: apple cores, carrot shavings, banana peels, meat scraps, pasta, etc. (Britton has requested that I do not include pieces of chicken so as not to make cannibals of them. I may or may not sneak some in occasionally.)  While my compost bin is now suffering (it’s pretty much all egg shells, coffee grounds, citrus peels and napkins now), turning our garbage into future eggs somehow feels more satisfying than turning it into future dirt. Plus, it lessens our chicken feed bill.
* Chickens put themselves to bed each night. When we go out to close them up as the sun is setting, we invariably find them all tucked in on their roost. (Roosting = one of the many chicken idioms in the English language). If we go out too early in the evening, they are not yet ready for bed and are still out in the pasture. Their internal clocks instruct them on what to do. Wonderfully designed creatures!
* I love watching the chickens. They cluck and peck and chase each other around and just do their chicken-thing like God designed them to. They delight me. If chaos reigns in the house or if a rare moment when all my children are peaceably occupied occurs, I might slip out and find my own moment of peace at the chicken pasture fence. They are mesmerizing. Caleb describes it as similar to watching a campfire – you can stare endlessly.

The Cast of Characters
Have you ever tried to photograph chickens? Its not as easy as it might sound. I was trying to get a picture of each pair of the same breed, but they are in constant motion and kept photo-bombing each other. I spent way too much time crouched down in the chicken pasture, being swarmed by chickens hoping for kitchen scraps (which I usually have), having my toes pecked at. These were the best I could do. Since our family loves books, each girl is named for a literary character (and I use the term “literary” loosely, as we are talking about everything from true literature to books my three year-old enjoys and everything in between). 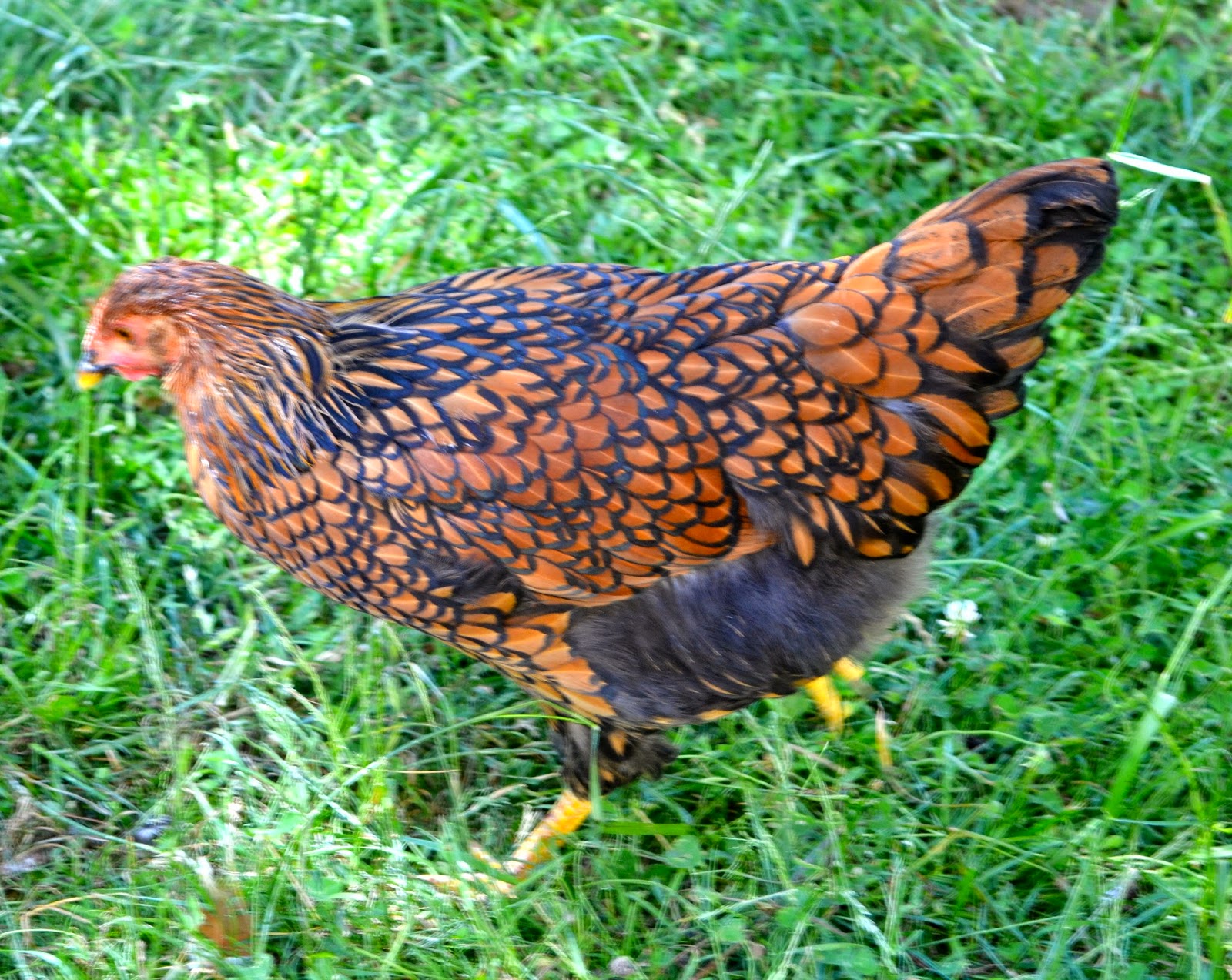 Our most beautiful breed (in my opinion), the Gold-Laced Wyandotte. We have two, “The Janes” – Jane Austen and Jane Eyre. 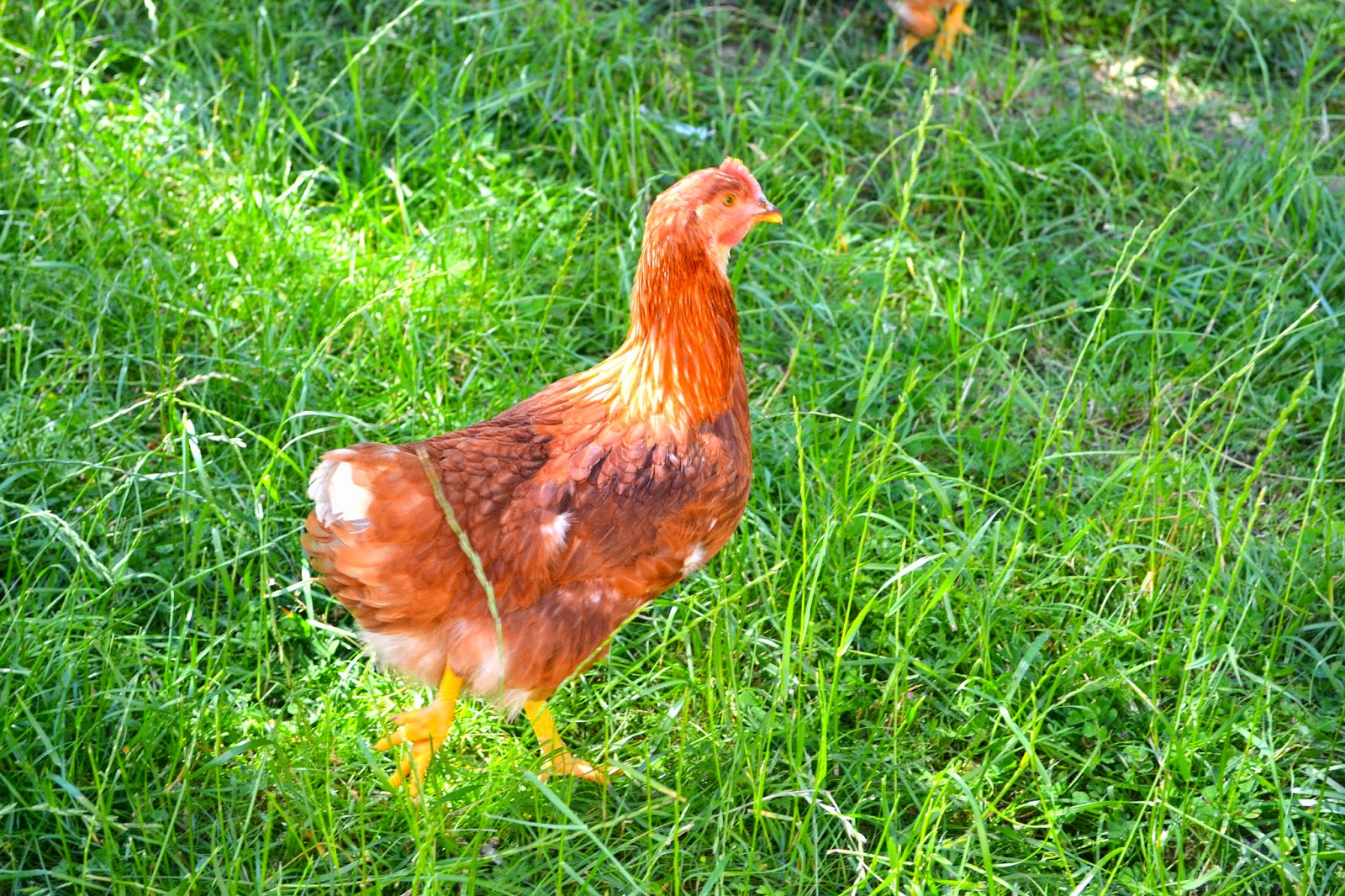 Our two Gold Sex-Link, Anne Shirley (the red-head, obviously) and Golden Miranda (so named for the perfectly sweet character in the Humphrey the Hamster series). Gold Sex-Link are a cross between Rhode Island Red and Rhode Island White. They are called Sex-Link because a chick’s gender is distinguishable at birth based on its color. Very handy when you want to ensure you are getting an egg-layer! 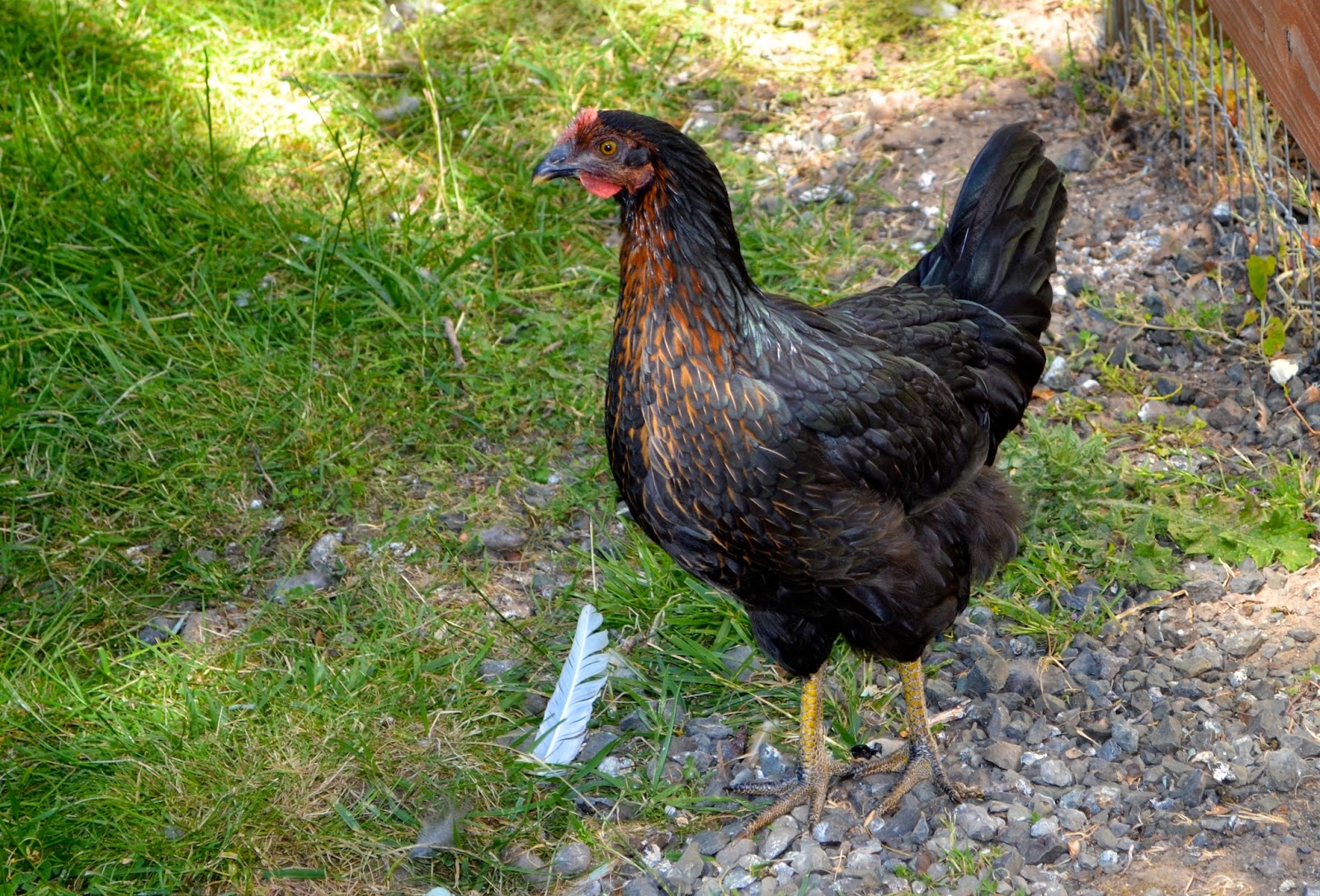 We have two of these Black Sex-Link, Diana Barry (Anne Shirley’s raven-haired bosom friend) and Cuddles. Cuddles was more aptly named when she was two-days old and was a little ball of fluff. I wouldn’t recommend cuddling her now. Black Sex-Link are a cross between Rhode Island Red and Barred Rock. Again, the males and females are distinguishable at birth by their markings. Their back feathers shine a deep green in the sun and they are gorgeous! 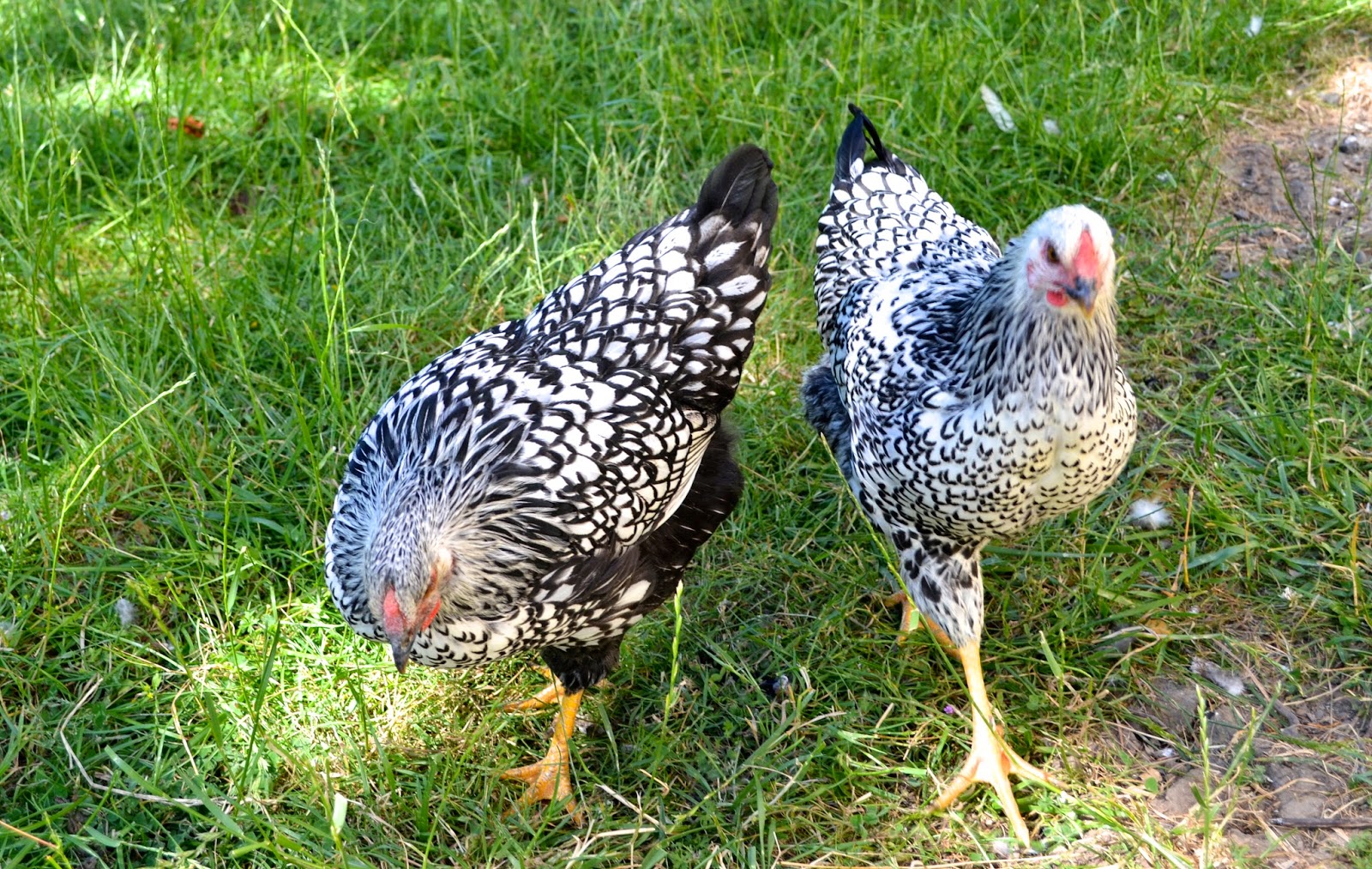 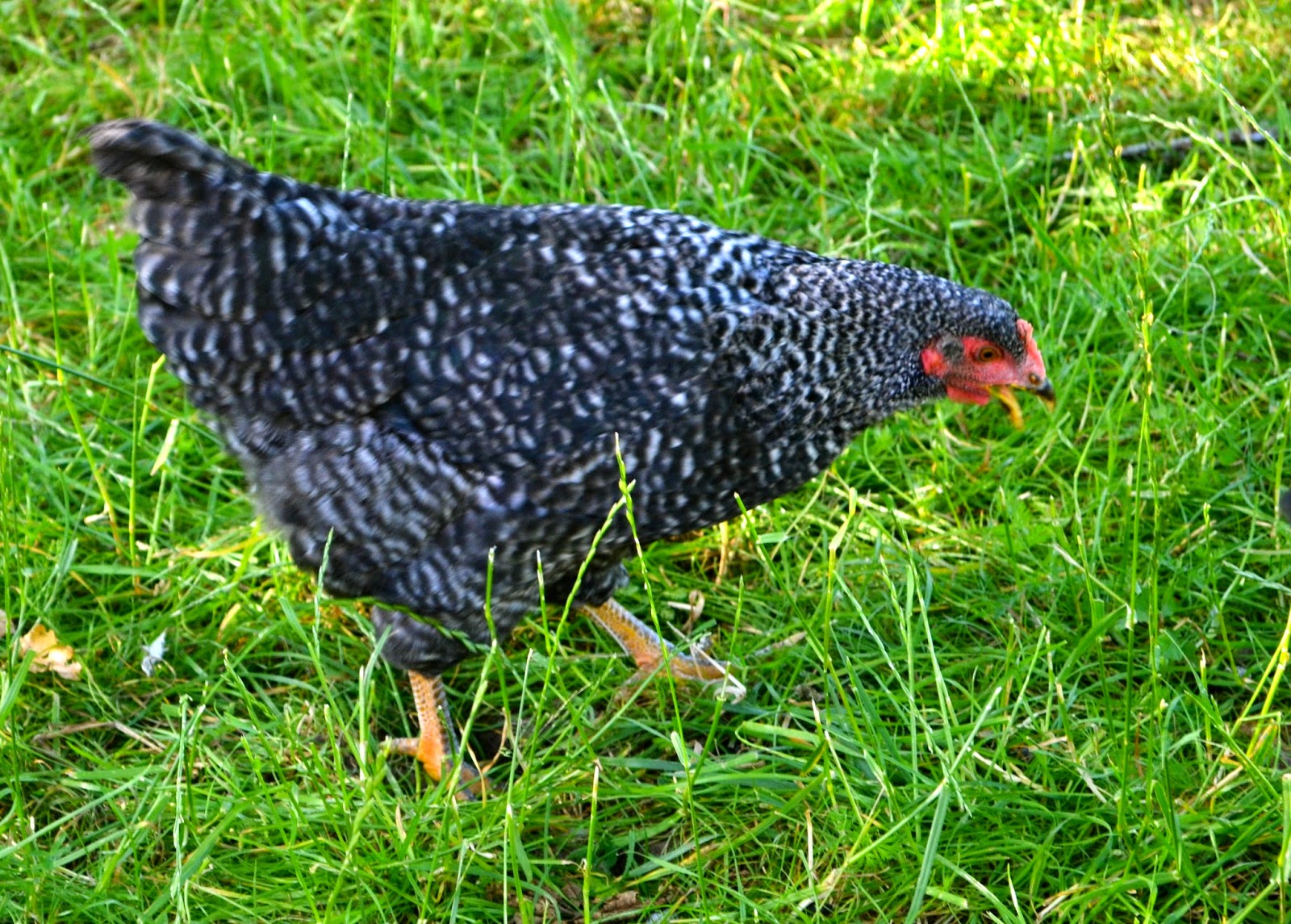 We have two Barred (or Plymouth) Rock, Violet (from the Boxcar Children) and Little Lavender (from both Anne of Green Gables and Harry Potter books). As a chick, I thought for sure Little Lavender wouldn’t make it. She was half the size of the others and just layed under the heat lamp all by herself when the others were off exploring. She appeared sickly and small, but she rallied and is now as large and ornery as the rest of them.
These girls are our mavericks. Daisy (from the Biscuit books) is a California White Leghorn. This breed represents 90% of commercial chickens. They lay between 300-350 eggs a year – more than any other breed. Do you buy white eggs from the store? They are almost certainly from a California Leghorn. I have found Daisy covered in blood no less than seven times. We have been at a loss to figure out how she is cutting herself. At 4 pounds, she is much lighter than the others and can squeeze places she shouldn’t. She can also take flight and will perch on top of the fence. I finally realized that the back half of the fence is topped by barbed wire and that is most likely where she is getting her pokes and cuts. Since she apparently is not learning from her mis-adventures, I suppose we will need to take the barbed wire down.
Hermione (from Harry Potter) is an Ameracauna. She has the look of a hawk or falcon with tufts of feathers around her face and a thick neck. She was my novelty pick because she is not a heavy layer, but she lays green eggs. I couldn’t resist. She is skittish and Britton laments that she is the only chicken he has not been able to pick up and hold. The other day I challenged him to a little competition to see who could catch her first. We ran around the chicken pasture for a good while (which did not assuage her fear of us, I’m sure). Alas, Hermione was the winner on that one. She remains unheld.
I can’t have a section called “Cast of Characters” and not put in a picture of these four: 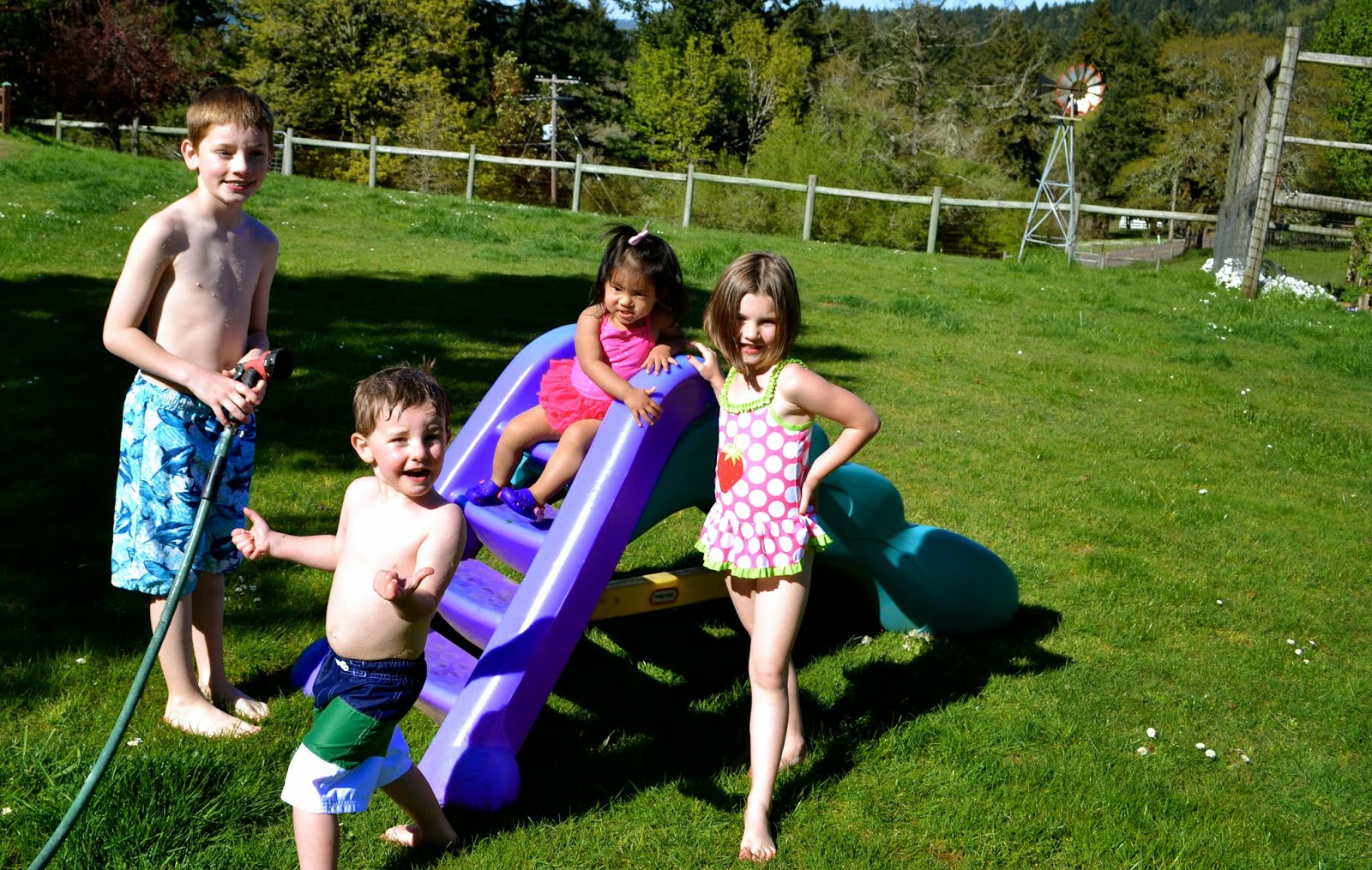 Never a dull moment around here!