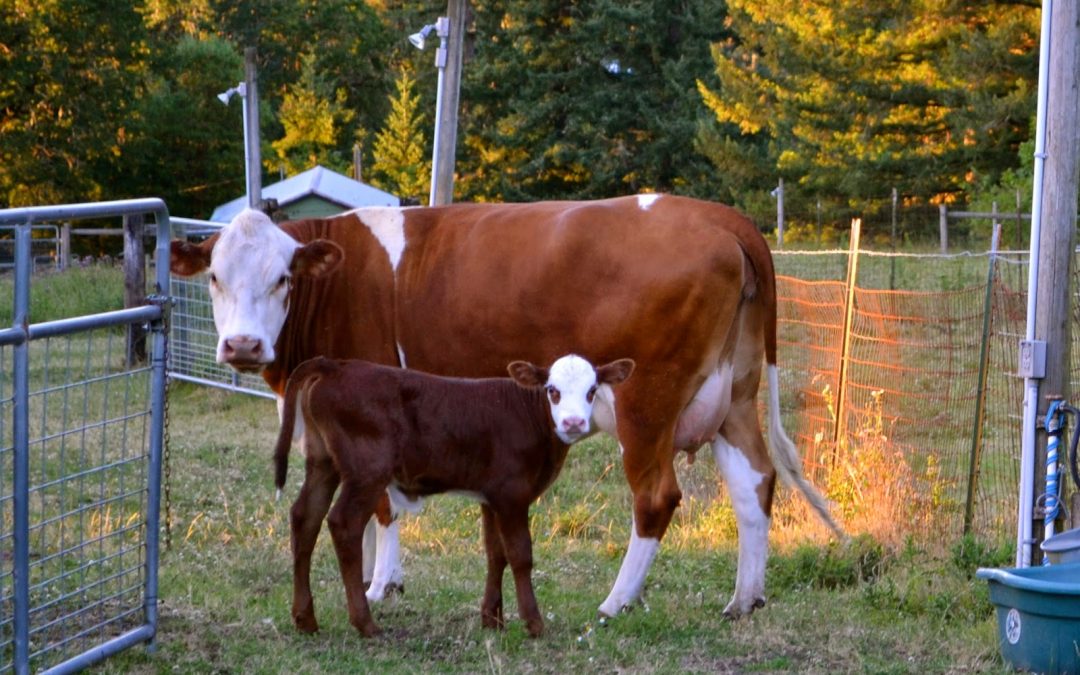 You may remember a few months back there was considerable speculation about the reproductive state of our cows. Well, let me end the suspense: 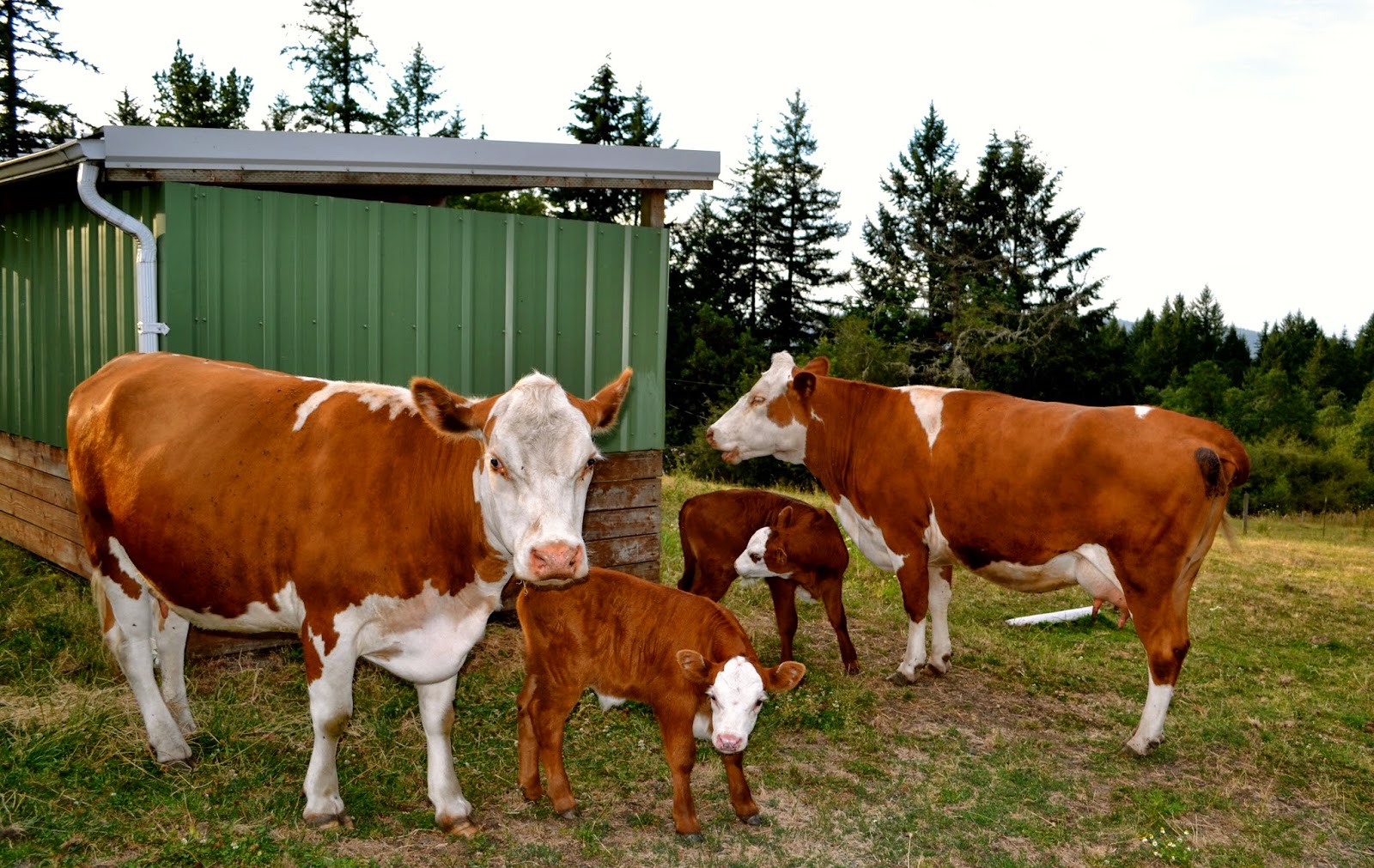 We actually found out before the calves showed up in our pasture that they were, indeed, pregnant. A couple of months ago I spoke with my very knowledgable neighbor (owner of the bull who fathered these adorable babes) and asked if she really thought the cows were pregnant. She said unequivocally, YES! She said she had not seen the cows exhibiting any “in heat” behaviors since the bull was in pasture with them. When I pressed her on what those behaviors would look like, she said, for example, they hadn’t been mounting each other. (Really? Female animals do that??) She said to definitely proceed on the assumption that they are pregnant. And the closer we got to D-Day, they were obviously much larger and their udders began to fill with milk.
Being the newbies that we are, we also had a country vet come out to check them out and make sure everything was in order. (I was disappointed that he was nothing like James Herriott. I suppose a Scottish accent coming from Dallas, Oregon was a bit much to expect.) He told us that cows should labor no longer than four hours and push for no longer than 20 minutes. After 20 minutes, we need to call him immediately.
Every day in June we eagerly watched the pastures for signs of new life and then the morning of June 24th I stepped out to this sight: 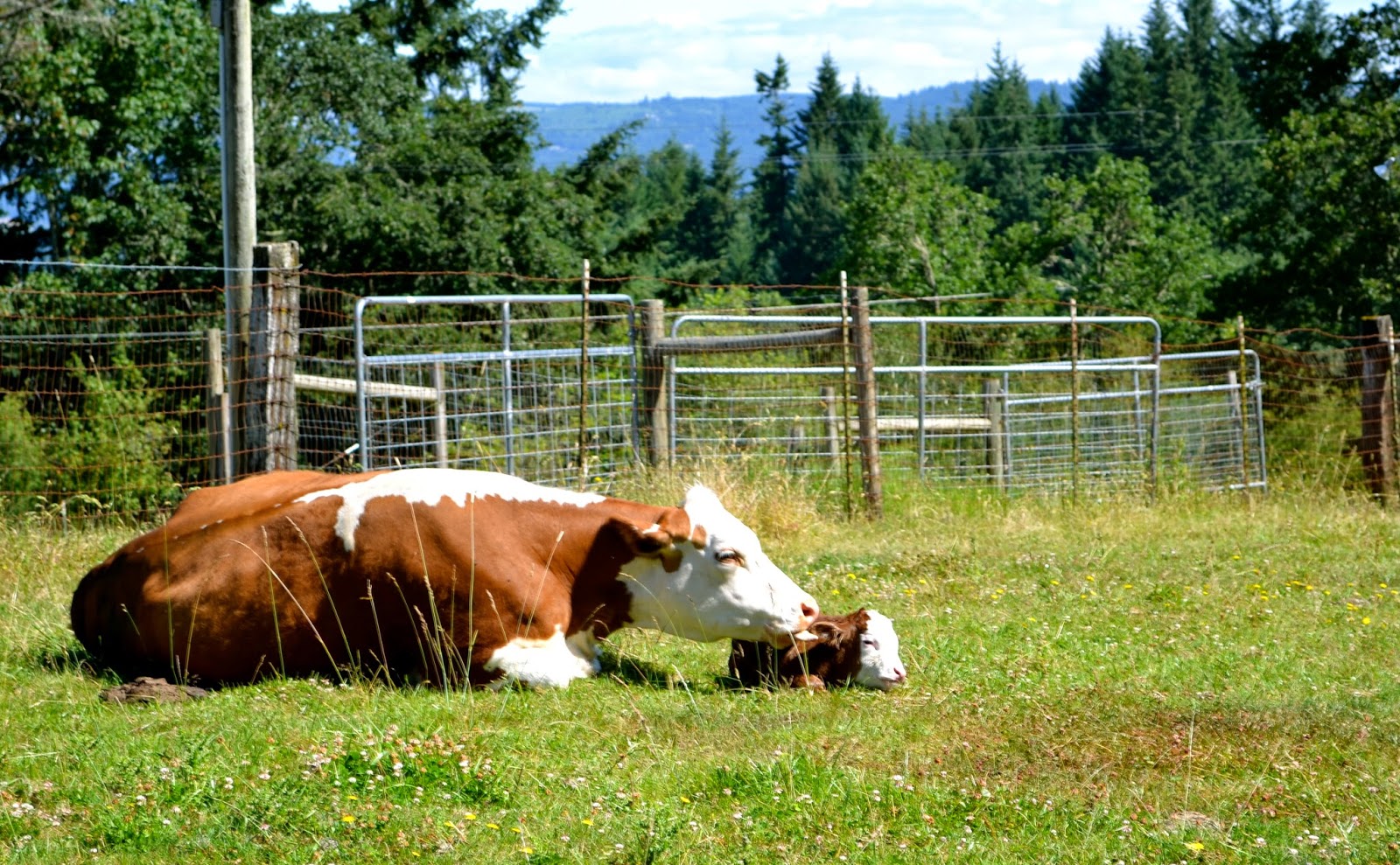 Baby Boy#1 was still wet and Mom #1 (Stripe) was cleaning him up. I think he was probably born an hour or so before I saw him. We were all very excited!
That very same afternoon I was fairly certain that Mom #2 (Splotch) was in labor. She was pacing around endlessly and not eating, her whole body contracted every so often, and her tail was sticking straight out. About 9:00 in the evening we were all working in the garden when Britton happened to walk by the pasture she was in. He yelled, “I see a snout coming out!” We sprinted over and were all able to witness Baby Boy #2 being born. It only took about five minutes and Splotch did not moo or appear distressed or in pain. We moved down into the pasture and stood right next to them for about twenty minutes, watching Mom clean him up as he kept trying (and failing) to stand on his wobbly newborn legs. I’ll tell you, peering over that fence on a warm summer evening with my children and husband, watching our cow give birth was an extremely special moment, a gift from God, and brought tears to my eyes. I’ll never forget it. We have no pictures because we were too busy actually witnessing it. But here is a picture of them later: 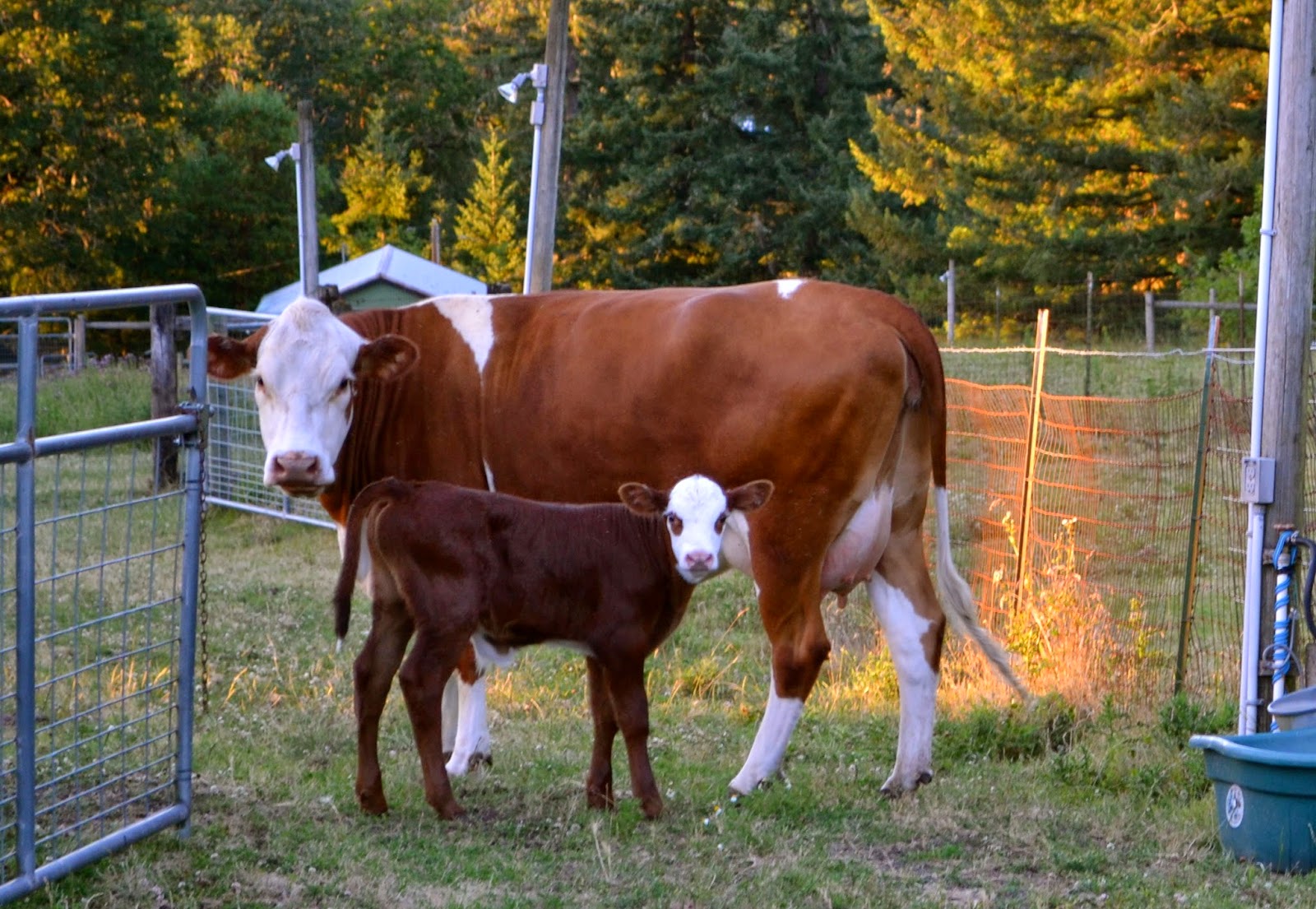 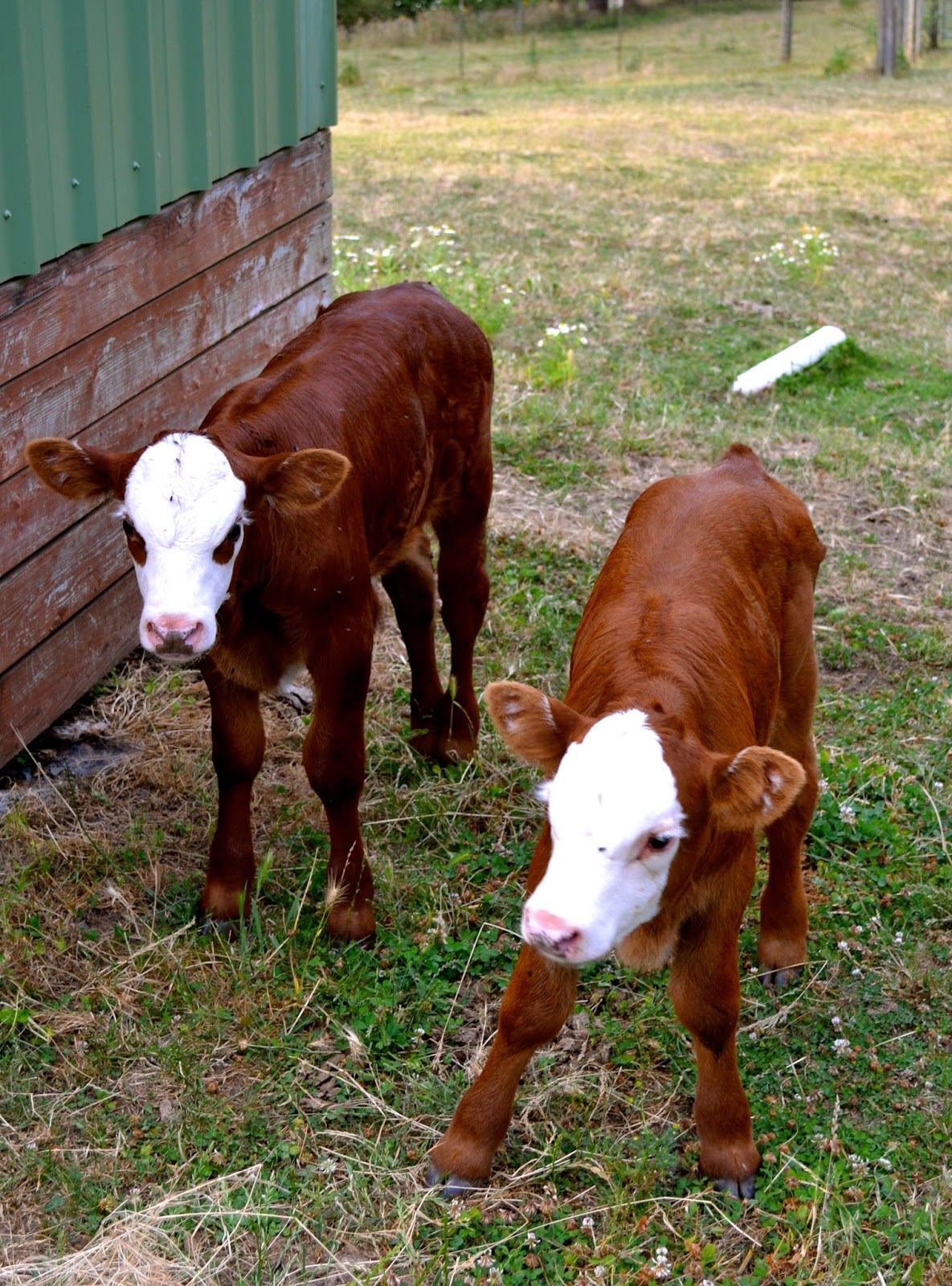 Britton immediately named them Goggles and Mask (“named” as a way to distinguish them from one another, not to make pets of them – or so we keep telling ourselves). Goggles is the most beautiful deep mahogany red color. My neighbor said he looks just like his grandfather, who they also owned. The boys have such fun playing together, running around the pasture and butting heads.
A few days after our little bulls were born, our neighbors came over and helped Caleb band them (i.e. change them from “bulls” to “steer”). It seemed in poor taste to photograph the event so my words will have to suffice. As a thank you I gave our neighbors several pounds of freshly picked marionberries. It seemed a quaint, country thing to do: trade two bull castrations for garden produce (though I’m sure the bulls steer think they got the short end of the trade). 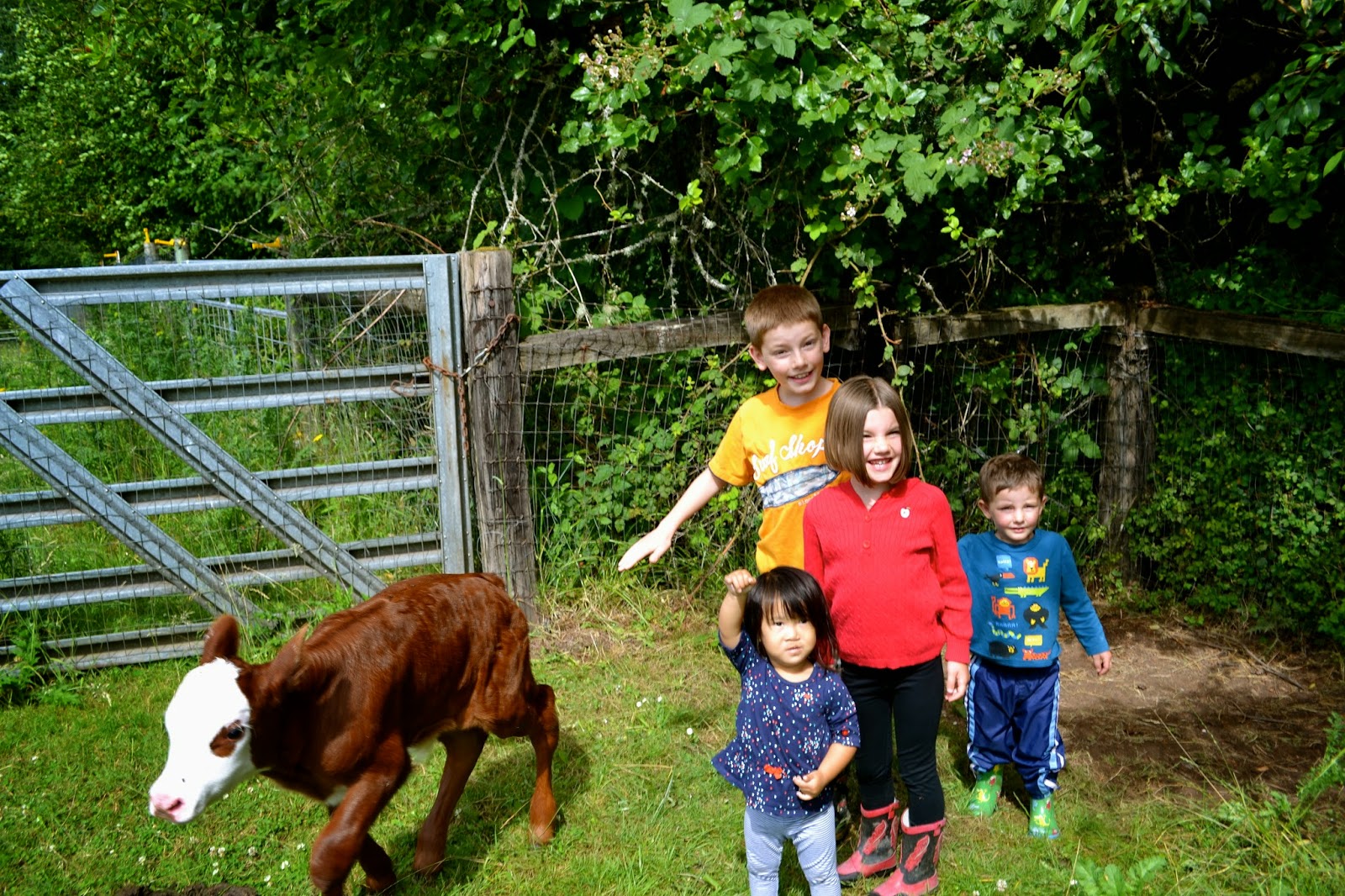 The calves are a little skittish with us (perhaps because of the above-referenced “banding” experience) but the kids have gotten to pet them quite a bit. 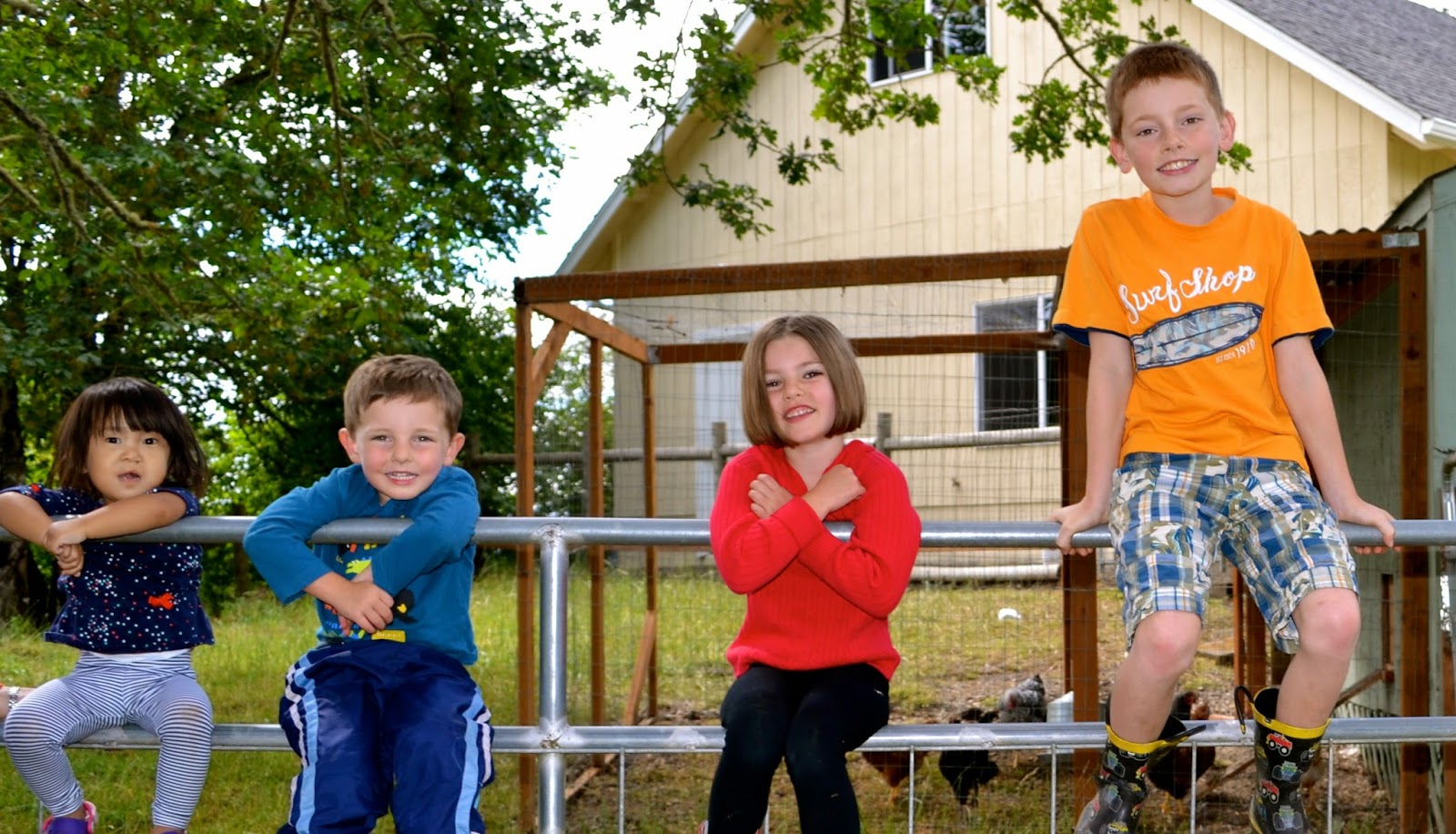 Britton recently told me, “I don’t ever want to be a ‘city-slicker’ again!” As proof he wrote the following song (printed with permission):
Living in the Country
a song by Britton
I moved to the country when I was 9
And I admit it was really fine!
The grass was green. Really green.
Greener than I had ever seen!
There were many trees. Lots of trees!
And we’re thinking about raising honey bees!
Chorus:
I’m livin’ in the country! Me and my family
Living! Living! Living in the country! Country! Country!
Come on down! Come on down! Come on down!
Come on down and visit me-e-e!
I moved to the country and got a cat
I’m so happy, gonna get a heart attack!
Chorus
Oh yeah-a-a! Oh yeah-a-a!
I’m living in the country
Chorus
There is hard work!
You get into the dirt!
But don’t let that discourage you!
Don’t say boo hoo hoo!
It’s really worth it yeah!
Chorus
I’M LIVING IN THE COUNTRY!
WOO!
The number of exclamation points alone should tell you how excited we are to be out here in the country and should make you want to come out here too!!!
Please follow and like us: