Chicken Odds and Ends (Plus, a Binding Promise) 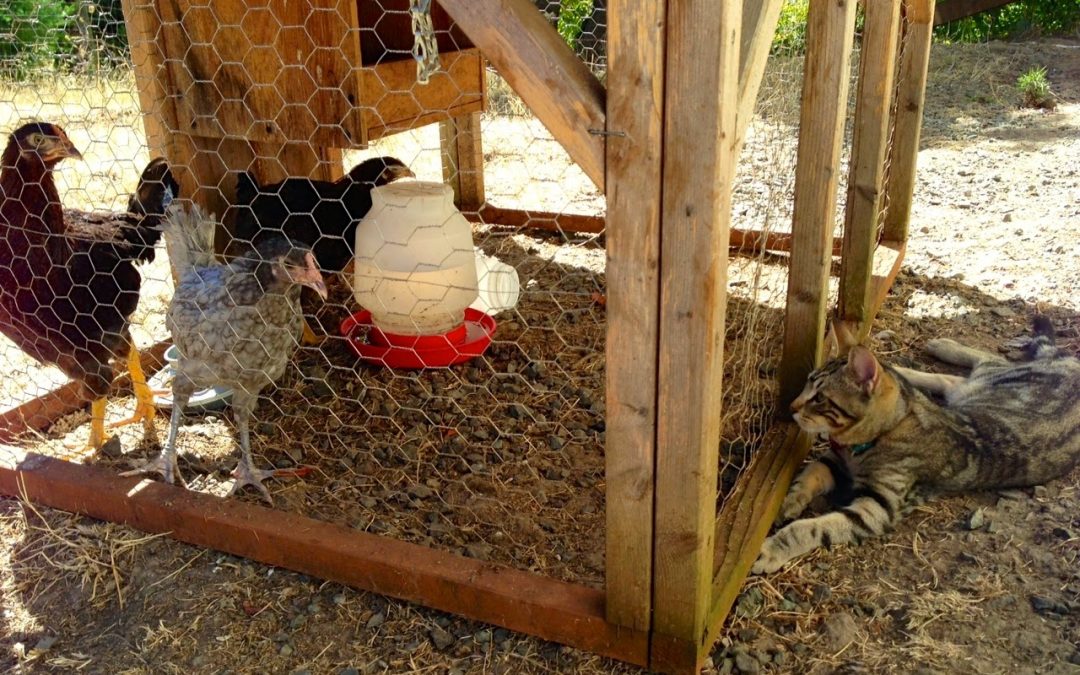 While on vacation this summer, my sweet niece who was house-sitting, had to deal with our first chicken death. She called to tell us that Daisy, our California White Leghorn was bloody. I told her not to worry because that happened to her a lot and she’s always fine (she has been poked by our barbed-wire fence numerous times) but this time, within a few hours she was dead. Britton and I were pretty sad. She was a favorite of ours and our best layer. Her daily egg, which was our only white one, is greatly missed.
We were now at 11 chickens and I had already decided that I wanted to increase our flock. We enjoy selling eggs to friends (we could sell them five times over, probably) and I want to make sure our family has enough this winter when their production will greatly decrease. My goal was to purchase juvenile chickens who were close to laying so that we didn’t have to start all over with chicks. I scoured Craigslist daily and found a man in the hills 30 minutes west of us, selling 16 week old chickens. Purchasing four, they would only be $12.50 each. I think, considering how much feed costs for those first 16 weeks, we about broke even on what it would have cost to purchase and raise chicks. Plus, he did all the work for us! We selected two Blue Andalusians and two Barred Rock, new breeds to us.
I have read horror stories of people’s whole flocks being killed off by introducing new chickens carrying diseases. All wisdom said to quarantine the new birds for 2-4 weeks to make sure they were not ill. I found a small coop on Craigslist for $100 that we could put in the chicken pasture, allowing  the new chickens to get used to each other in a safe way. We reasoned that it would be nice to have an extra coop anyway for quarantining sick or injured birds, or for placing in the garden so that chickens can till up the soil and eat over-wintering pests in the dirt. This coop was the complete opposite direction from the chickens (45 minutes east) and we could not get out there for a couple days, so in the interim the new chickens lived in a barn stall.

Returning home with the coop, we went straight to the barn to retrieve the new chickens and move them into their new home. But wait, only three chickens awaited us. The barn door was cracked open and a small pile of silver feathers laid in front of it. A crime scene but no body. (Maybe that was for the best.) We were disappointed, but only because of the loss of egg-laying potential (and $12.50). We were certainly not yet attached to the chicken itself. What most concerned us, was that our sweet 6 month old kitten, Digory, was also missing. He always runs out to greet us and is never gone for long periods of time. By bedtime that night, I was all but certain he had been a coyote’s appetizer before the chicken dinner. Britton was completely devastated and we were praying those prayers that, as a parent, you worry you are going to have to explain why God didn’t answer. Honestly, I shed a few tears myself because Digory is the best cat EVER. And then, about 10 o’clock, Digory waltzed up like nothing was amiss and headed straight to bed. Now what you should know about Digory is that by four in the afternoon he starts harassing us to feed him dinner. And then first thing in the morning he loudly complains until we feed him breakfast. This night, that cat went straight to bed and did not eat until noon the next day. The chicken was about the same size as Digory, so it’s hard to reconcile. But I have my suspicions. His obsession with the chickens in the following days did nothing to alleviate them: 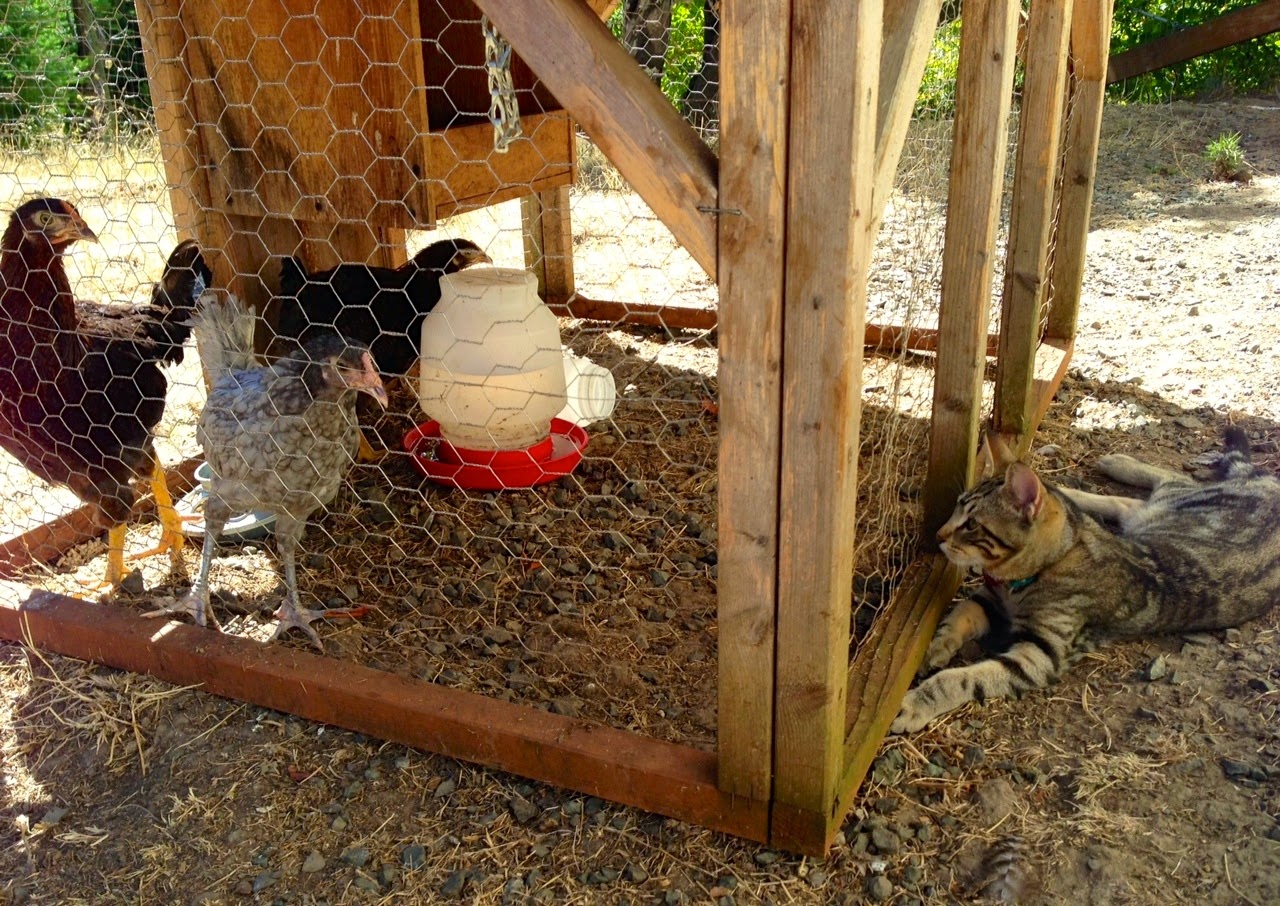 We noticed that one of our Silver Wyandottes, Bethany, was in the nesting box day and night. She never left and there was no egg under her. I had just read about chickens becoming “egg bound” (basically constipated with an egg) and thought it very providential, otherwise I would have had no idea that Bethany was in distress. I carefully researched how to help Bethany pass her egg. Caleb, Britton and I dutifully retrieved Bethany from the nesting box. Chickens have one chute for all their business (poop and eggs) and it’s called a vent. Britton dumped castor oil down her throat and then Caleb held her upside down while I poured olive oil down her vent. Poor Bethany. We decided to stop with those treatments and see if she would find relief.

The next day she was still in the nesting box, eggless, and I had that sinking feeling that I was going to have to use the “other” intervention: sticking my hand into the vent. Caleb (un)sympathetically said that the chickens were my thing and he really thought I should do it. He held Bethany upside down again. I will never forget staring down into that vent, trying to channel my inner-farm girl. I told myself that I can do hard things. I tried to conjure up the mind-over-matter strength required for the task. (A tad mellow-dramatic, I know, but these were truly the thoughts in my mind.) I literally could not do it. As I frantically tried to find a way out, a vague piece of information nagged at my sub-conscious. I often heard about chickens going “broody”. What does that look like? We decided to pause the procedure while I researched it.

Turns out, a broody chicken does not leave the nesting box because she wants to hatch eggs like she is designed to do. She does not lay eggs during this time because she already has and is waiting for them to hatch (even if there are actually no eggs under her). When a person gets near her, she will puff herself up and try to appear as large as possible, like all protective mamas will. Yes, this is what Bethany was doing! And to think, I almost …  Well, as Pa Ingalls always says, “All’s well that ends well.”  I think the take-away lesson here is, when in doubt, do NOT reach into a chicken’s vent. (For the record, I did pick Bethany up, look into her eyes and apologize for dumping olive oil down her vent.)

With Bethany, we just kept throwing her out of the nesting box several times per day and she eventually snapped out of it. But then the other Silver Wyandotte, Annabeth, and a Gold Wyandotte, Jane, became broody at the same time. There are a couple of problems with broodiness. One is that the chicken doesn’t lay eggs. Another problem is that she clogs up the nesting boxes so that there is no room for chickens who actually want to lay. During a recent bout of broodiness, three chickens crammed into one nesting box:

A fabulous chicken resource is backyardchickens.com, with forums addressing every chicken issue known to man-kind. Fellow chicken-keepers’ suggestion for broodiness is to create a cage, such as a dog kennel, up on blocks, so that there is no cozy place for the chicken to sit and “hatch” eggs. Keep her in for three days and then release her and see if she goes straight back to the nesting box. If  she does, put her back in. If not, she is cured.  Ladies and Gentlemen, I give you The Broody Buster:

We placed The Broody Buster in a barn stall and after three days, released the girls, completely cured of their broodiness. We’ve used it on one other chicken, Hermione, and she too was cured. Although she has never resumed laying, which is a bummer as she was our only layer of green eggs. I’m assuming this has something to do with the shortening days and the approach of winter. We’re down to 6-8 eggs per day and I’m unsure if our three newbies (Hedwig, Susan, and Lucy) have started laying or not.

Readying the Coop for Winter

We set aside a warm, dry Saturday in September to thoroughly clean the coop before the fall rains and short winter days (meaning more coop time for the chickens) arrived. Our favorite chicken reference book advises that this is only necessary twice a year. We donned galoshes (and horrifyingly, not gloves. I promise we will do that next time. I can’t believe I didn’t think of that!) and shoveled all of the poop-and-feather-laden bedding into 5 gallon buckets and dumped them into the tractor scoop. Caleb then transported it to the compost pile, where, by next spring, we should have rich, fertile compost to feed my garden soil. (Truly, God’s design for these things leaves my little brain in awe.) We also scraped chicken poop and chicken dust off of all surfaces. Chicken dust is like pet dander and covers every inch of their dwelling. Shoveling the bedding stirs it up and it gets in the lungs. We probably all should have worn face masks too.

As a conscientious student of me, my dear husband has noted a predictable pattern: About every two months I get the itch for more animals. A week after moving to our farm, Brody the Golden Retriever joined our family. We purchased twelve chicks. Our cows had babies. Digory the kitten found a home. I became obsessed with goats: Welcome, Elinor and Marianne. I increased my flock of chickens. A year has passed and it all adds up to a very full barnyard (and house). After spending an entire weekend in the car, tracking down chickens and their new coop, Caleb illicited a solemn promise from me: “No more animals.” It has been two months and I remain true to my word. But I keep seeing these cute little piglets for sale and I sure do love bacon…