China in Two Blog Posts…Part I 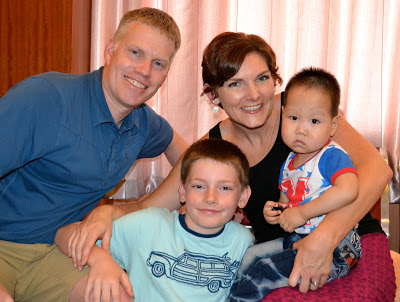 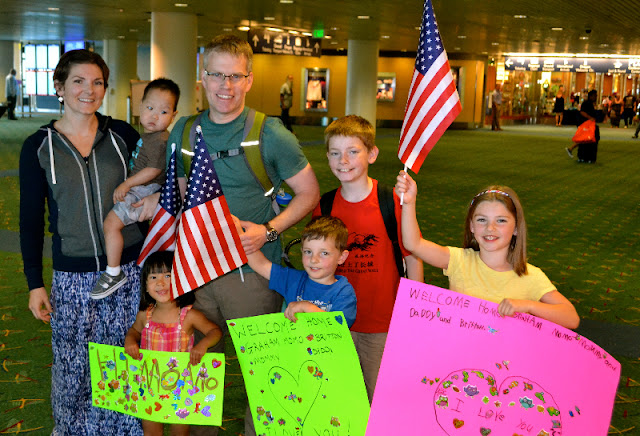 We have been home as a family of seven for two weeks. I didn’t blog while in China because I wanted to have time to reflect and collect my thoughts before sharing. It can be difficult to have perspective in the middle of an experience. I also find it tricky to blog about adoption in a way that shares the excitement of the miracle but preserves the privacy and dignity of my adopted children and of our family. Many details are theirs alone to share (or not) as they choose in the future. Also, please know that if I don’t share hard things, it doesn’t mean they aren’t there. “Snapshots of Life” is in my blog title. Who takes snapshots of their child screaming bloody murder on a plane for an hour? (I was too busy crying and have subsequently tried to erase that hour from my mind.) If I am speaking to you personally, I am happy to share the hard stuff, but I don’t use this forum for too much of that. This is the GOOD stuff! I really tried to keep it to one blog post, but for goodness sake, I used two posts for adding goats to our farm, so I figure Graham deserves at least that. And there is just too much GOOD stuff! So bear with me, Friends.

Caleb and I probably would not have done sight-seeing in Beijing this time if we had not had Britton with us. But it was so much fun having him there! Last time it was winter and there was not a stick of green anywhere. We found the city much more appealing this time. We were also blessed with incredibly good weather (mid 70s, whereas it had been in the mid 90s for weeks) and incredibly rare air quality. No one was wearing masks, which is nearly unheard of. Thank you, Lord!

Below is a video of Britton eating his scorpion. You will also witness me dropping mine because it appeared to move. I contend it did. For the record, we bought another skewer and I did eat one, as did Caleb.

Nanjing is a beautiful former national capital city on the Yangtze River, and now the capital of Jiangsu province where Graham is from. Unfortunately, due to a Chinese holiday, we had two less days there than usual and two more days in Guangzhou at the end of the trip, so we had almost no time for sightseeing. June 15, 2015, is the day we met Graham, but not until 2 pm. I was feeling very nervous. We distracted ourselves by crossing the street to the Confucius Temple, which is one of a handful in China devoted to his memory. It was a maze of well-kept old buildings turned into shops and a very pleasant place to stroll around. Britton had some souvenir money absolutely burning a hole in his pocket and thankfully, he was able to make a purchase: a Chinese instrument called a Hulusi. After three years of tin whistle at Classical Conversations, Britton was able to seamlessly transition to the Hulusi. (I can hardly type this with a straight face. The Hulusi is like a tin whistle + nails on a chalk board. And we shared a hotel room for two weeks.)


Five families with our agency, Holt, and three Dutch families with another agency, all met their children at the same time and location. Graham was the last to arrive. He was led in by the orphanage director and his favorite caregiver was waiting in the wings. He let me pick him up but was very tentative and serious. Eventually his caregiver came over and put out her hands to him and he gladly went to her. I was wishing she had not done that because I could see it was going to be hard for him to come back to me. But as I saw her nuzzle him and kiss him and wipe away her own tears, I realized that my prayers had been answered. He had been loved and I was so, so grateful. I could never begrudge her a final goodbye. Thank you Yuan Nai Nai (Grandma Yuan) for loving my boy. He did cry when he returned to me, but it was a stoic, controlled cry. He stopped and started three times in the 90 minutes we were there. And then he’s never cried (apart from fussing at bed time and the aforementioned incident on the plane where he was completely exhausted) again. 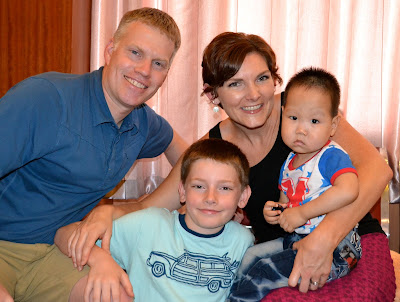 The first night we got him in jammies, ordered room service (he loved pizza and french fries!), watched some TV, and he slept 12 hours straight, holding a Matchbox car in each hand. Sweet, emotionally exhausted boy. 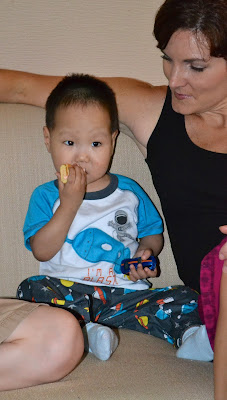 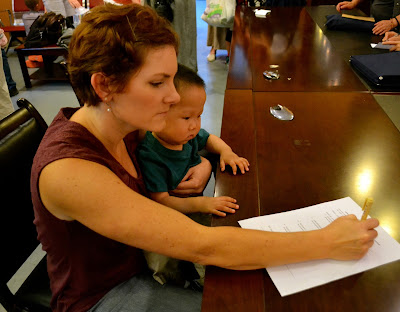 The next day we returned to sign papers and make the adoption official. The orphanage director gave us a gift, a beautiful plate with the name of Graham’s city on it. She also gave us her contact information and asked us to send updates on him. She said she would like to send us all of the pictures she has of Graham. She proceeded to scroll through her phone and showed us many pictures of him with his friends. I could see how deeply she cares for the children, and as I’ve gotten to know Graham more and witness how emotionally healthy he is, I am certain that he was in a very loving place. Through an interpreter, I feebly attempted to thank her for taking care of our son until we could get to him. I could scarcely get the words out for the lump in my throat. She said that it was her job to take care of him. I could see though that it was more than a job to her, and I can’t thank God enough for answering this Mother’s prayers.