January on the Farm 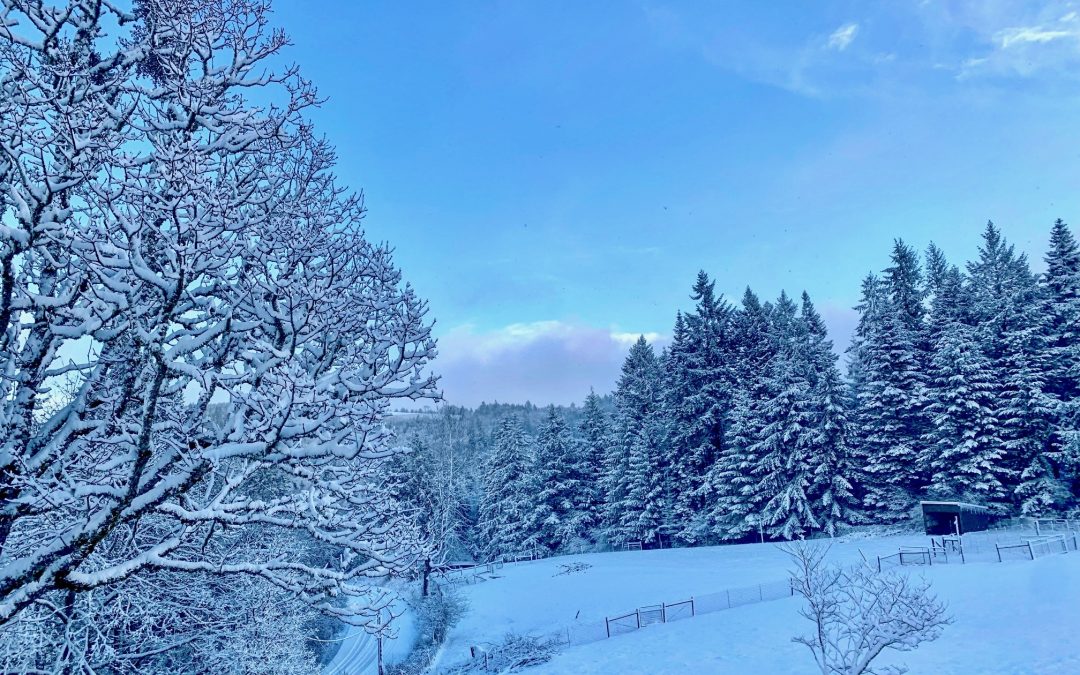 Live in each season as it passes;
breathe the air, drink the drink,
taste the fruit, and resign yourself
to the influences of each.
~ Henry David Thoreau ~ 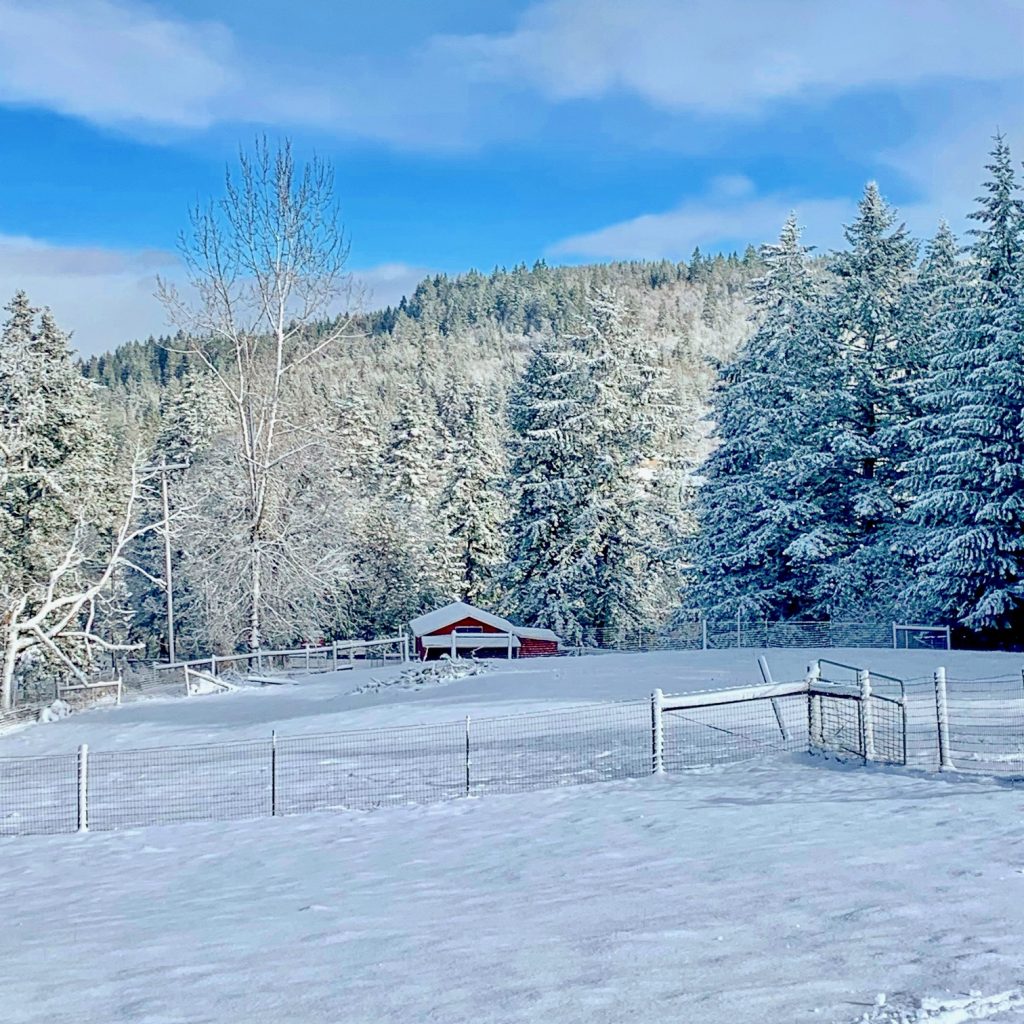 I discovered the above Thoreau quote shortly after we moved to our farm eight years ago, and I have had it pinned to a bulletin board in my kitchen ever since. It perfectly expresses what I long for on our farm and the joy we have encountered  … to have life ordered by external rhythms, to live according to the seasons, to eat fresh and seasonally, to rest in cold and dark months, to labor in warm and light months. These rhythms are what I desire to share in my “Seasons on the Farm” series. Each month I will share some reflections, as well as the tasks that the season required of us. I hope you will follow along and be amused, informed, and maybe even blessed.

I often struggle with feeling like we are not “real” homesteaders. I mean, compared to some city-folk, we do a lot: we raise most of our own meat and eggs and a grow a respectable garden, along with a small orchard. But compared to many of the very serious homesteaders I admire, we are adorable: we outsource the slaughtering or our animals, we rarely have enough to sell to other people, and we are hardly self-sufficient. I spend a ridiculous amount of money at Costco each month keeping my large family fed. But this month I had a revelation: I have a gentleman-farmer husband who works 60 hours per week at an office job. Yet he has arrived late to work because he was pulling a dead calf from its mother; he has come home from a long day at work and missed dinner because he was pulling a struggling lamb from a first-time mother; he toils every spring weekend to prep my garden for planting. It is not easy, and we don’t have to do it.  We don’t make money. This is not our living. It is merely the life we are choosing. And that is legit.

I LOVE winter months on the farm because they are a blessed relief from the busy months of doing. There is not much to do in January, and I LOVE it. I read. I make bone broth. I read. I clean out drawers. I read. I set New Year’s goals. I read. I bake bread. January is a gift. 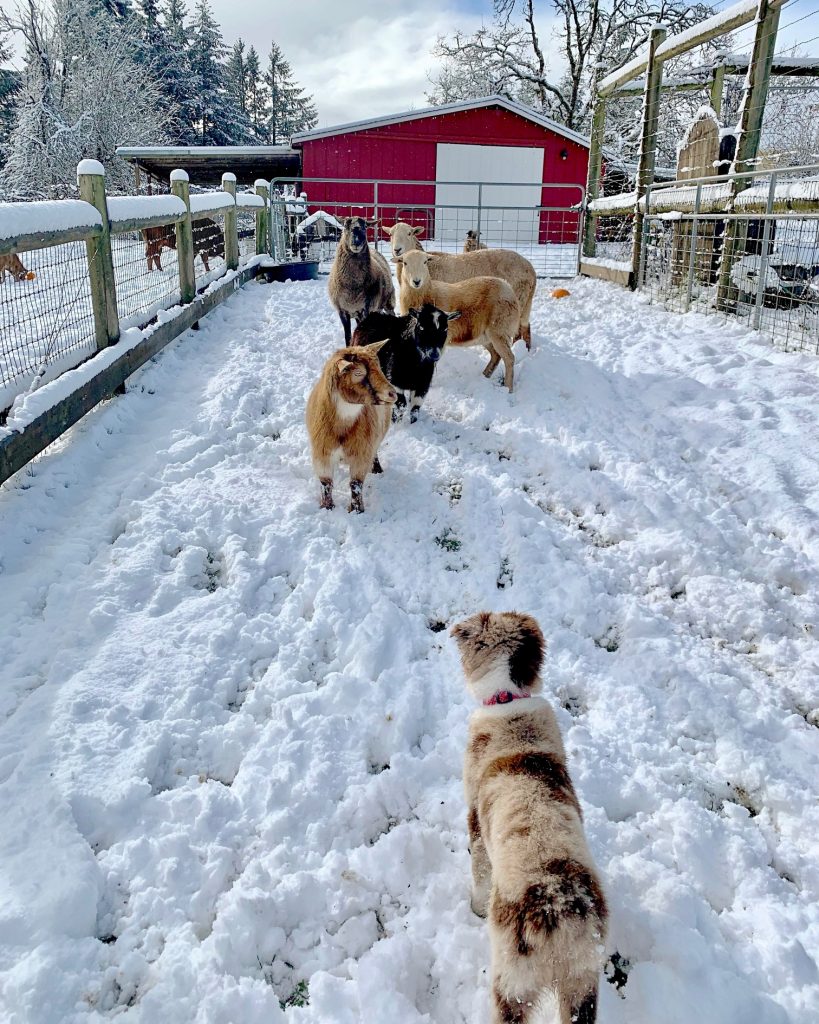 After the rare and wonderful Christmas snow, we had probably 10 straight days of torrential rain, and it was not idyllic around here. Even for Oregon, it was rough. The chicken coop was wet and stank. The cows were slogging through a nasty bog (“The Depths of Despair”, as my kids have named it) to get to the barn. Chores were … well … a chore. Then we had several days of dense fog that never lifted.  I actually don’t mind the moodiness of fog and think it a good reason to stoke the fire, light the candles, and play Loreena McKennitt music. Finally mid-month, we saw the sun. 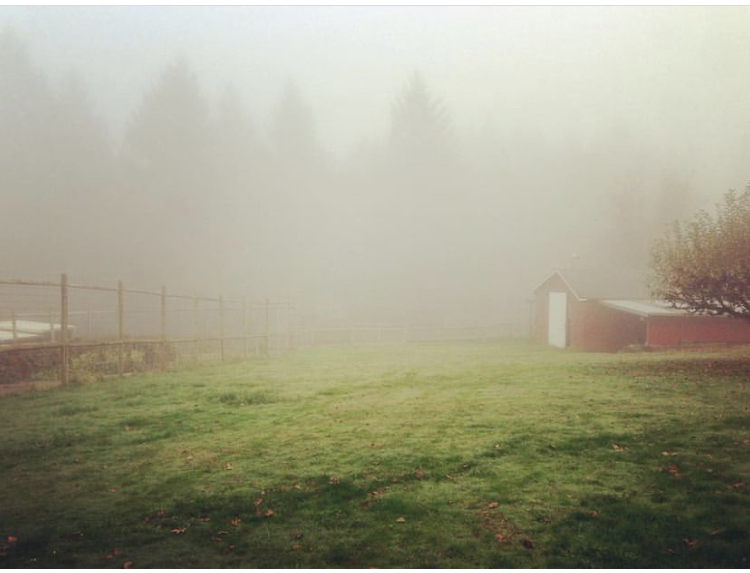 The first dry Saturday we declared “Homestead Saturday”  and spent the day working on the farm as a family. We cleaned out the barn. We layed fresh straw down in the chicken run. Caleb repaired the chicken coop roof, which had blown off in heavy winds. We placed new straw down in the sheep shelter in preparation for lambing in a couple of weeks (spoiler alert for February… we  already have some lambs). We had a cord of firewood delivered and stacked it in the barn. (Even though we have years-worth of wood from last winter’s ice storm, it is still too wet to burn and we needed to buy some for this winter). 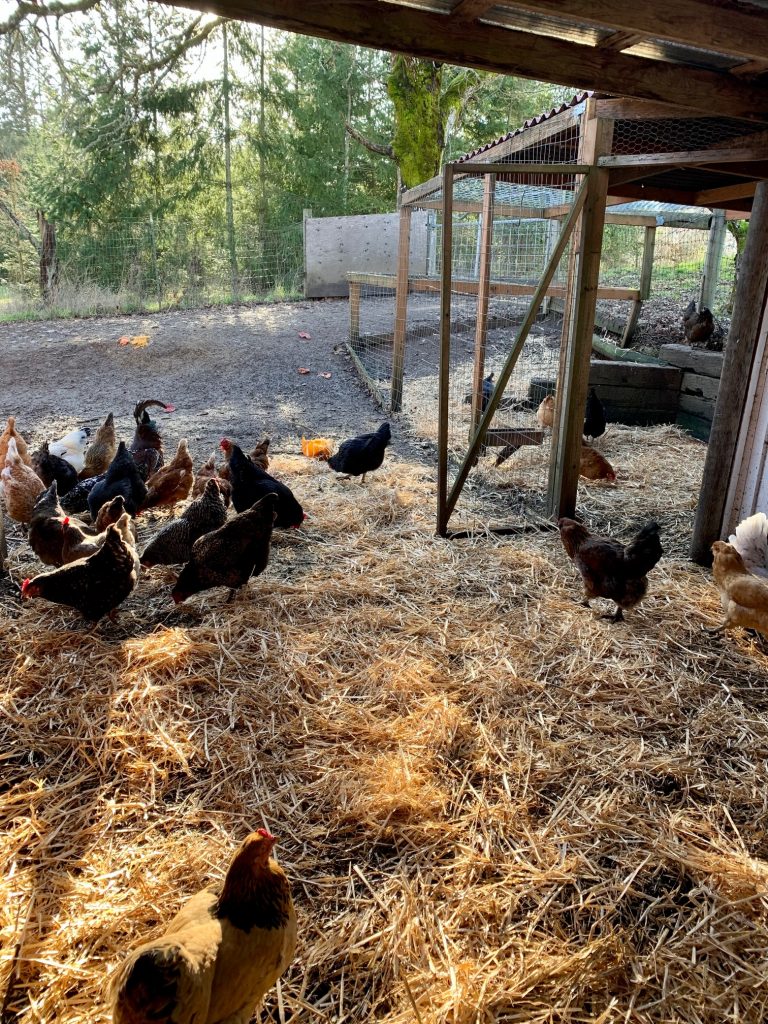 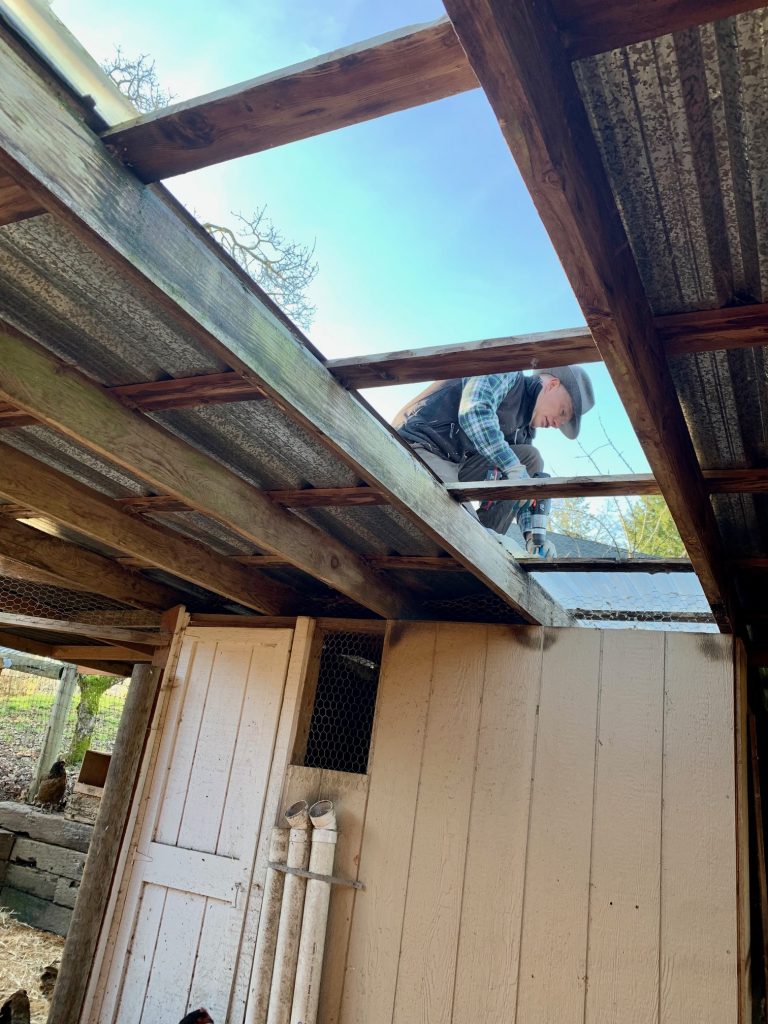 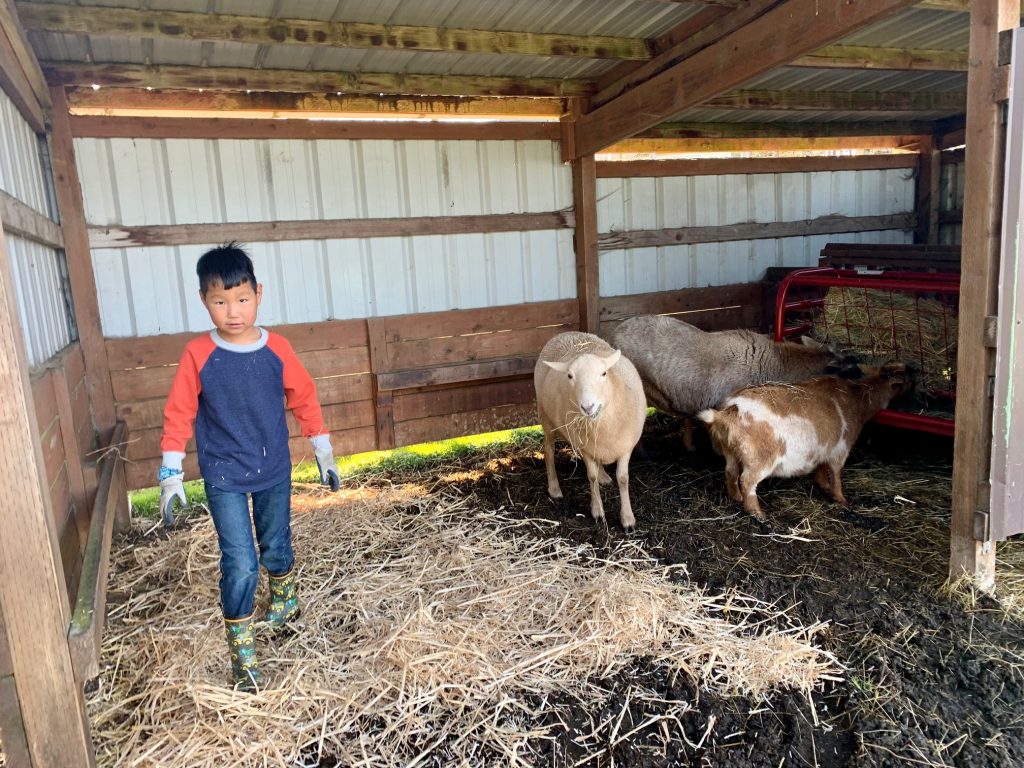 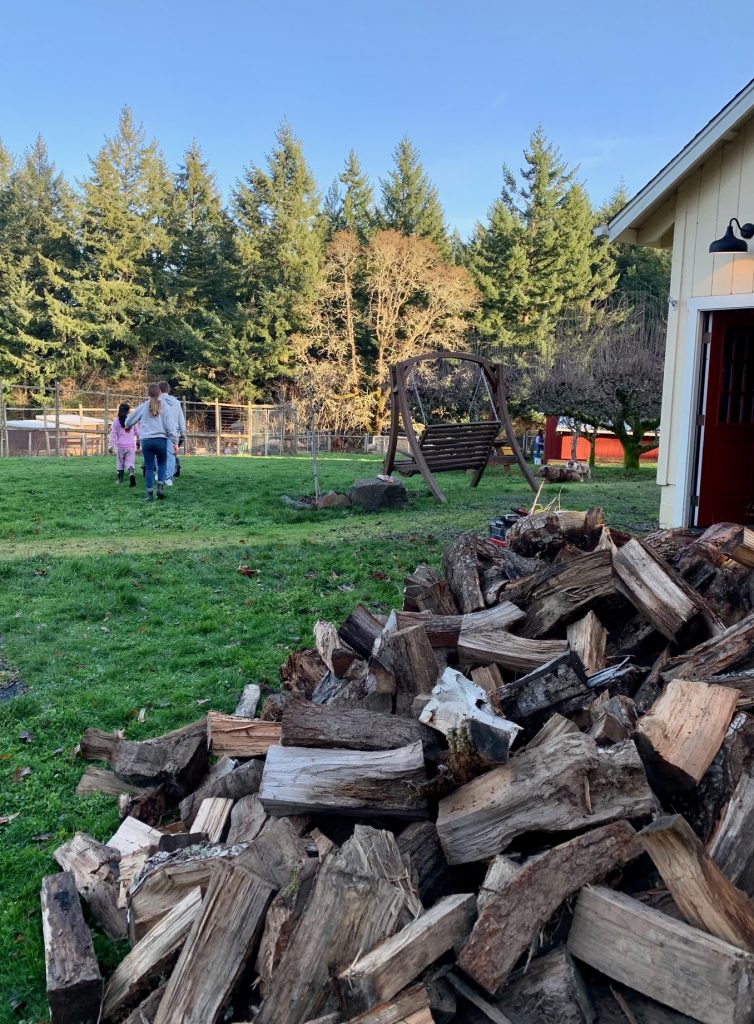 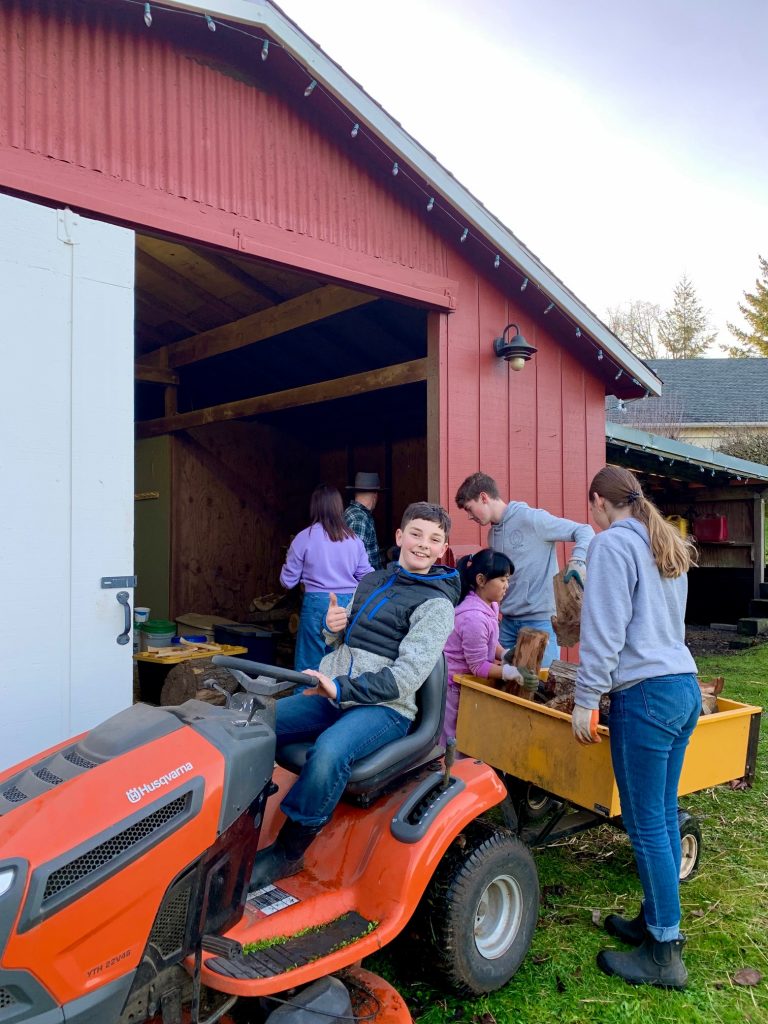 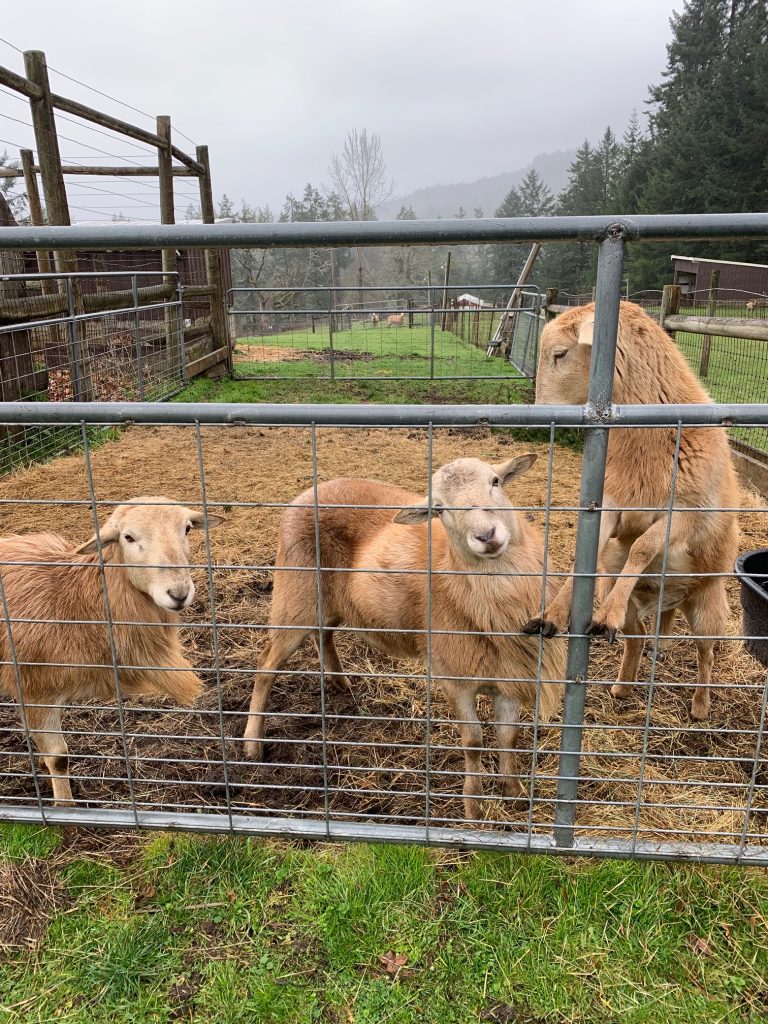 It is really challenging to find a butcher right now. They are in high demand and short supply (great career opportunity for the right person!), but we got a lead on a new one who also does mobile slaughter, which is so much easier than loading up our animals and bringing them in. The slaughterer came out and quickly took care of the three pictured above. (One of these was the aforementioned lamb delivered by my gentleman farmer.) None of us watched this part, and in fact one of my children cried at the thought. However, during processing, three of them (including the one who cried) ended up going out to watch the whole thing. This ended up being one of the most meaningful experiences we’ve had on our farm. The man was such a good teacher and explained each step of what he was doing. He showed us the organs and bagged them up for our dogs. (He also threw them each a leg, and I have a pretty great picture of our little puppy chewing on a lamb leg, but I thought it might be too disturbing for my gentle readers.) He squirted my hands with the liquid from the bile duct and swore it is the most nourishing, healing thing you can put on skin. I know it may sound weird, but standing in the pouring rain watching my kids watch the meat we raised and the meat they will eat be processed and learning about how it’s done from a patient teacher filled my heart to the brim. I loved it.

The other thing I loved is that we traded one of our lambs to one of Caleb’s winery clients for some nice bottles of wine. He picked up his lamb from the butcher and we stopped by his winery to pick up our wine, and we chatted about meat and farms and vines and wine and families and it felt rewarding to share with him what we do in exchange for what he does.

Saying Goodbye to our Rooster, Caspian 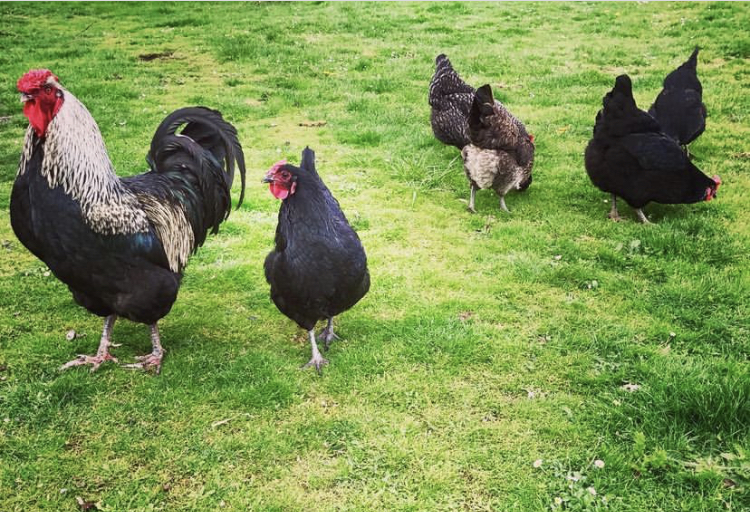 Caspian was from our first unexpected hatching six years ago (that time we woke up to twelve baby chicks running around the barn). I never thought I wanted a rooster, but he ended up being the best provider and protector for our ladies and was so regal looking. Last summer he started to look pretty shabby though and it took a while to diagnose him with mites – a parasite that attacks birds and poultry. We fumbled through trying to treat them but never very seriously. He continued to diminish and it was clear this month that he was suffering and was not going to recover. I told Caleb that I thought it was time for him to be put down, and Caleb picked a time, did it quietly, and told me afterward. I was really thankful it was over quickly because I was sadder than I expected to be. 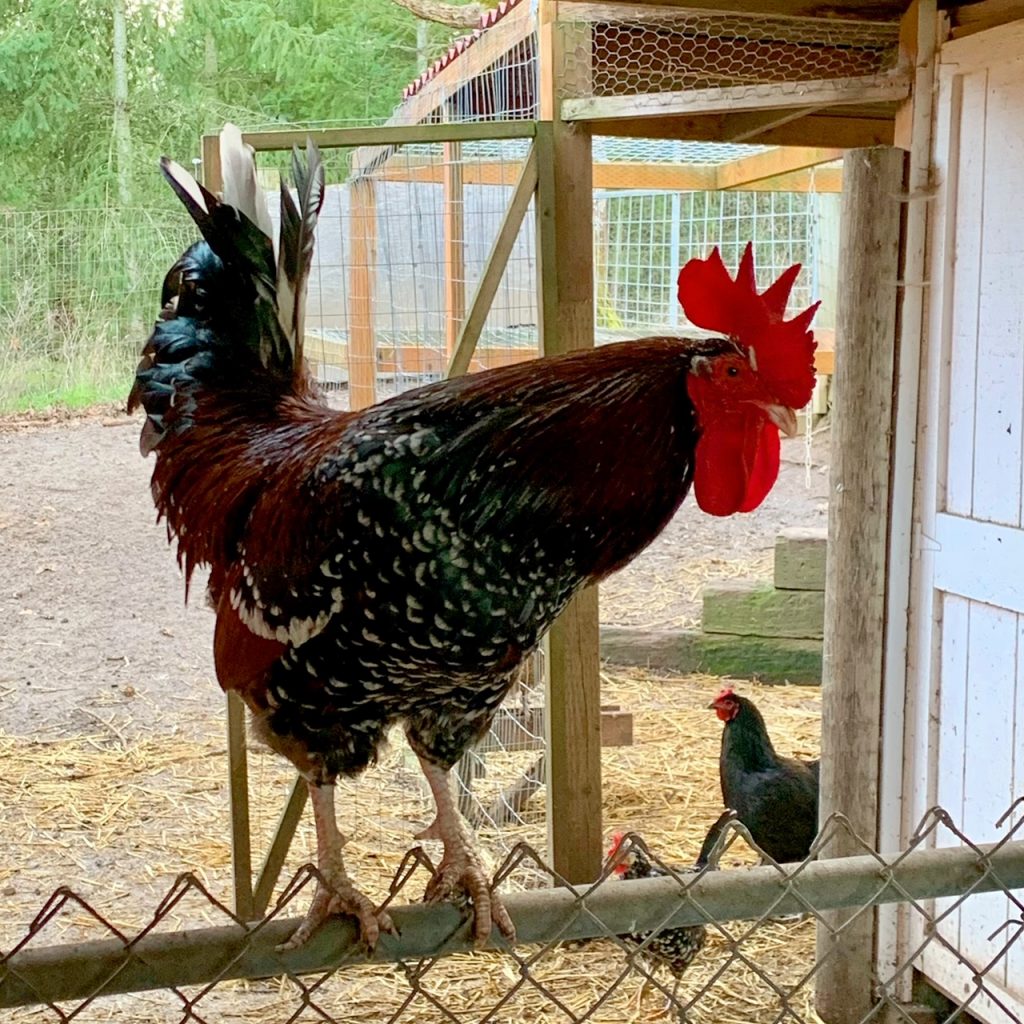 Our second rooster (a Wilco chick who was supposed to be a hen) is alright. He’s a young buck and the ladies don’t respect him. He chases them all over the barnyard, and he is pretty rude to them. He’s certainly no Caspian, but I suppose he’ll come grow into his role as sole-rooster as he matures. He also needs a name. I’ll be thinking on that. 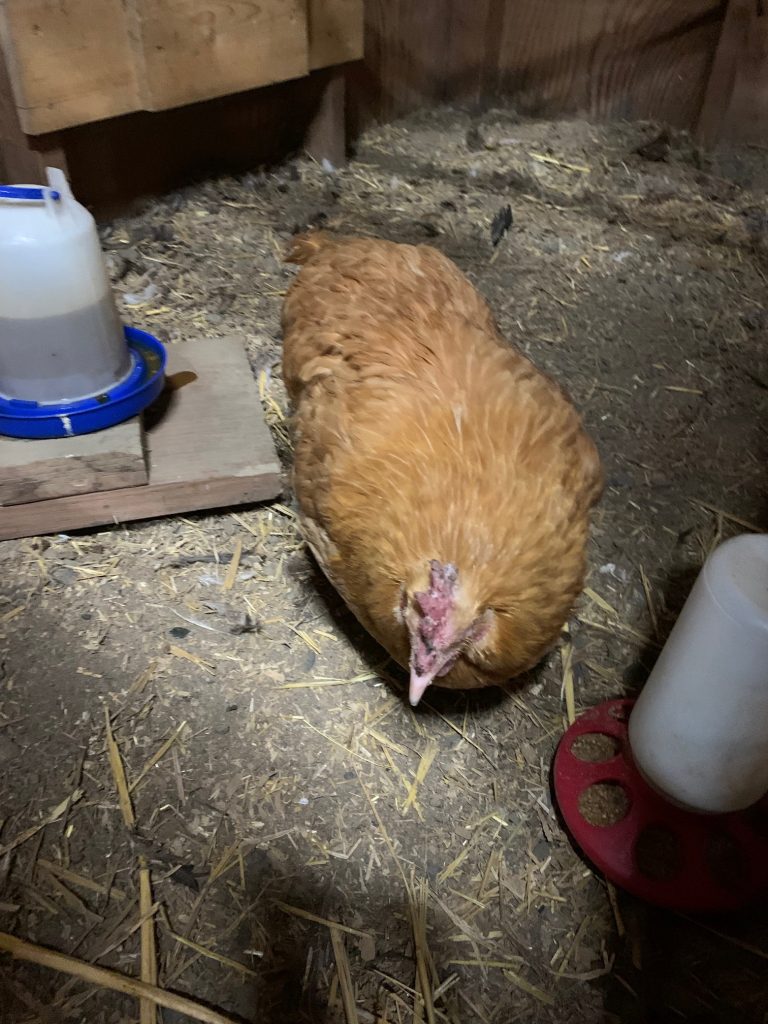 Not only did we lose Caspian, we lost a hen to mites this week as well. We were going to put her down, but I had dusted her thoroughly with poultry dust and isolated her with food and an electrolyte/vitamin drink in the barn, and it seemed like she was improving. But I came out one morning to find her dead. I felt really disappointed in myself for letting the mites get so bad and that she and Caspian had suffered. Our goal is to always let our animals live the lives their creator designed them for, with lots of green grass and wide-open spaces and as little suffering as possible. This convicted me that I needed to deal with the mite problem immediately: 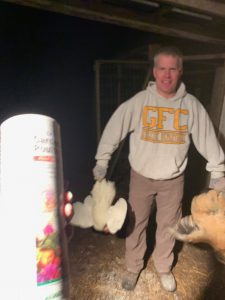 Perhaps living normal life on our little farmstead where I grieve my old rooster and my child cries for the lamb she helped raise, where we send freshly pressed cider home with friends (but don’t have enough to last us past the weekend) and gift homemade jam from the pantry to teachers… where we give not out of our excess, but from all we have… perhaps that is exactly what this homestead life is about. We’re doing what we can, and we love it, and that is enough. 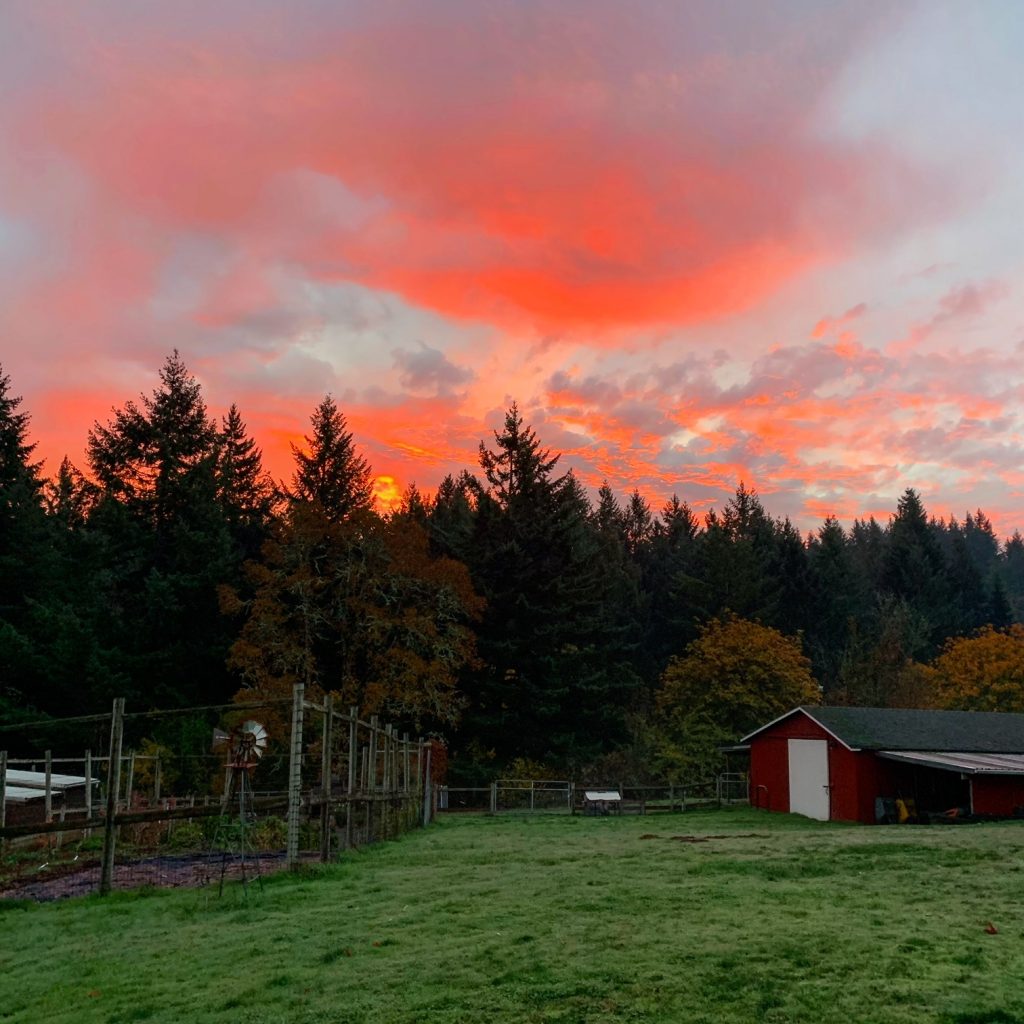