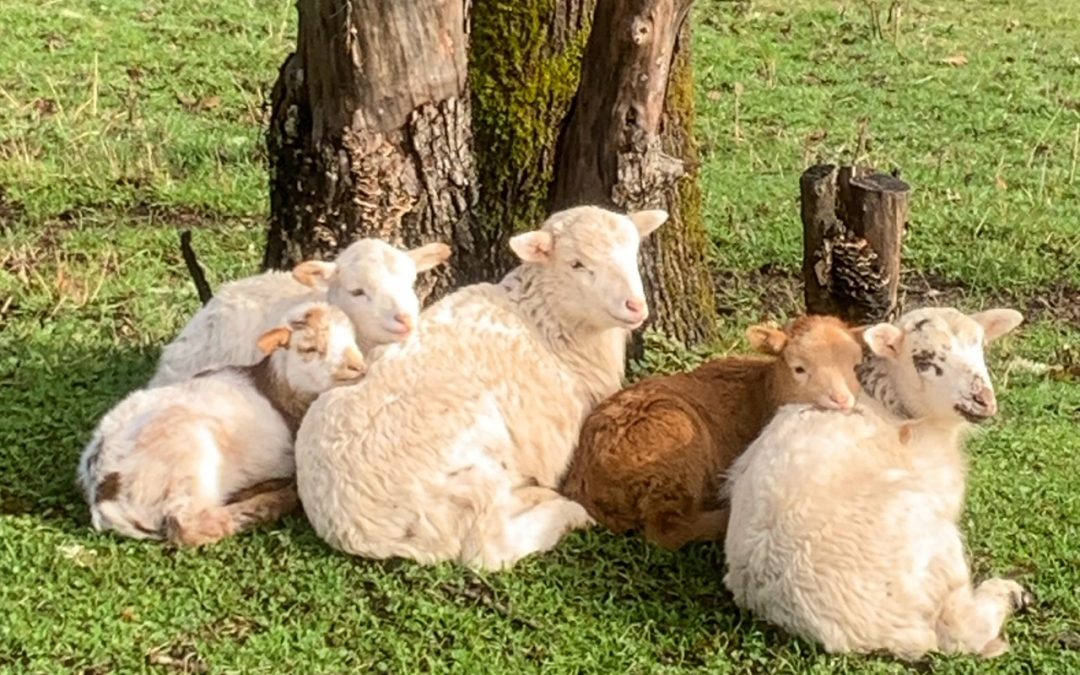 Come, sweetheart, listen, for I have a thing
Most wonderful to tell you – news of spring
Albeit winter still is in the air
And the earth troubled, and the branches bare,
Yet down the fields to-day, I saw her pass –
The spring – her feet went shining through the grass
~ From “The Miracle”, by John Drinkwater ~

February gave us a few blissful glimpses of spring, as it is wont to do. Sunshine, even cold sunshine, is a balm to the worn-down wintery soul in February. Sometimes in the dreary wet, trudging out to morning chores, I forget that it can ever be different. I forget that there are mornings when birds sing and sweetness permeates the air. I forget that sometimes the cool of the morning is the day’s gift before the sun scorches. February is a reminder of what is to come. 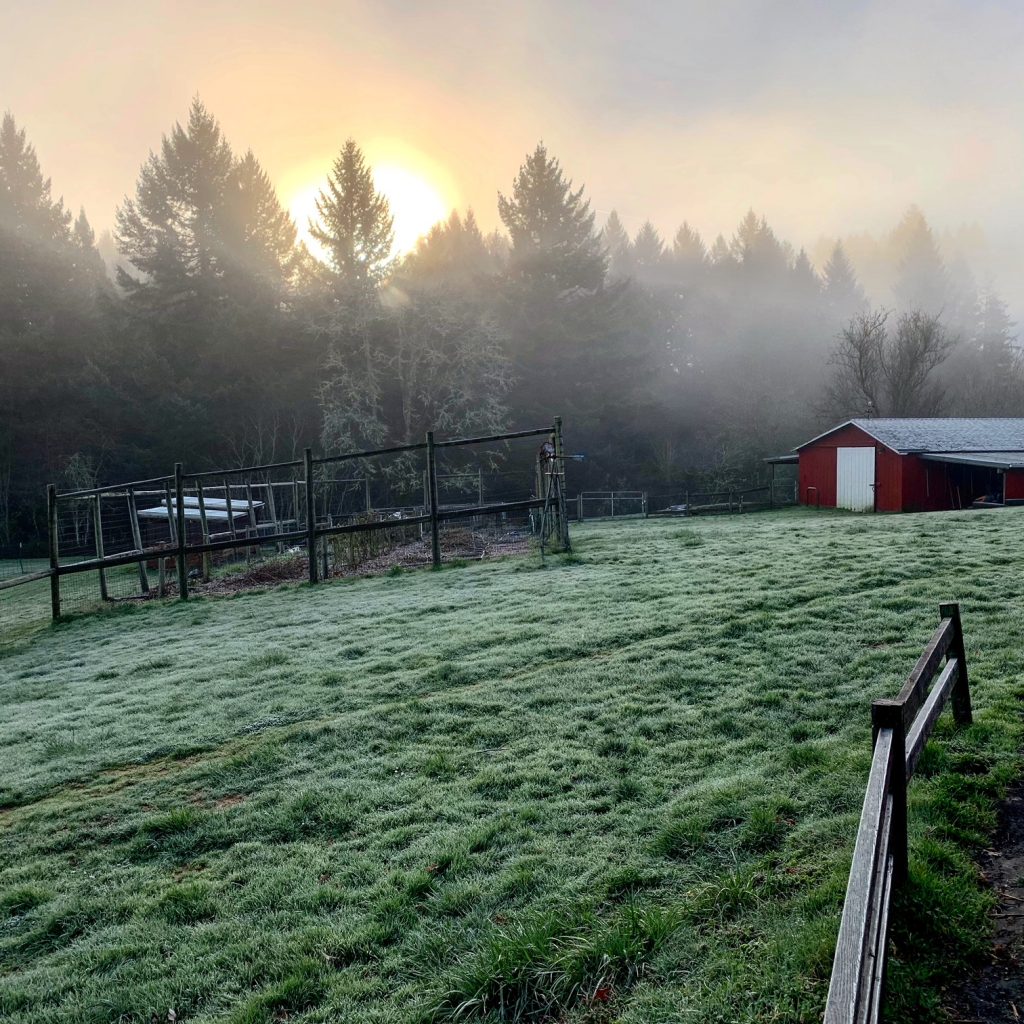 February also ended abruptly, as it is wont to do. And though I began this post on time, I became overwhelmed by a situation we’re dealing with here. Let’s just say that I have a lamb in Pampers in my kitchen. (And I thought I wouldn’t have much to write about in February.) 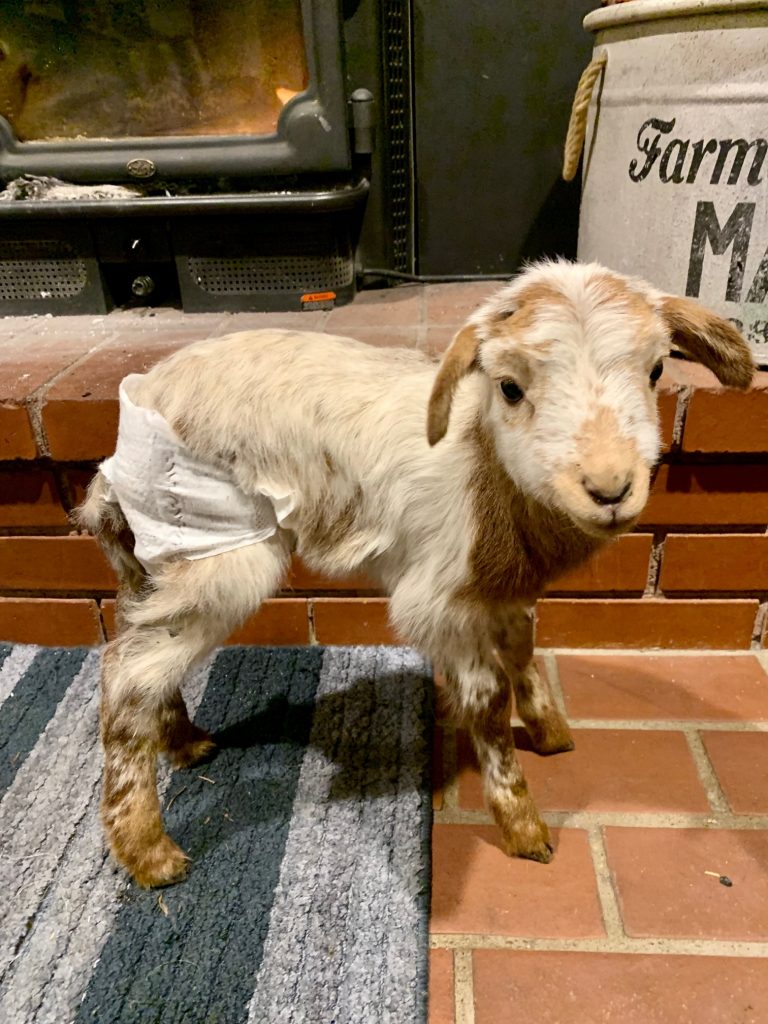 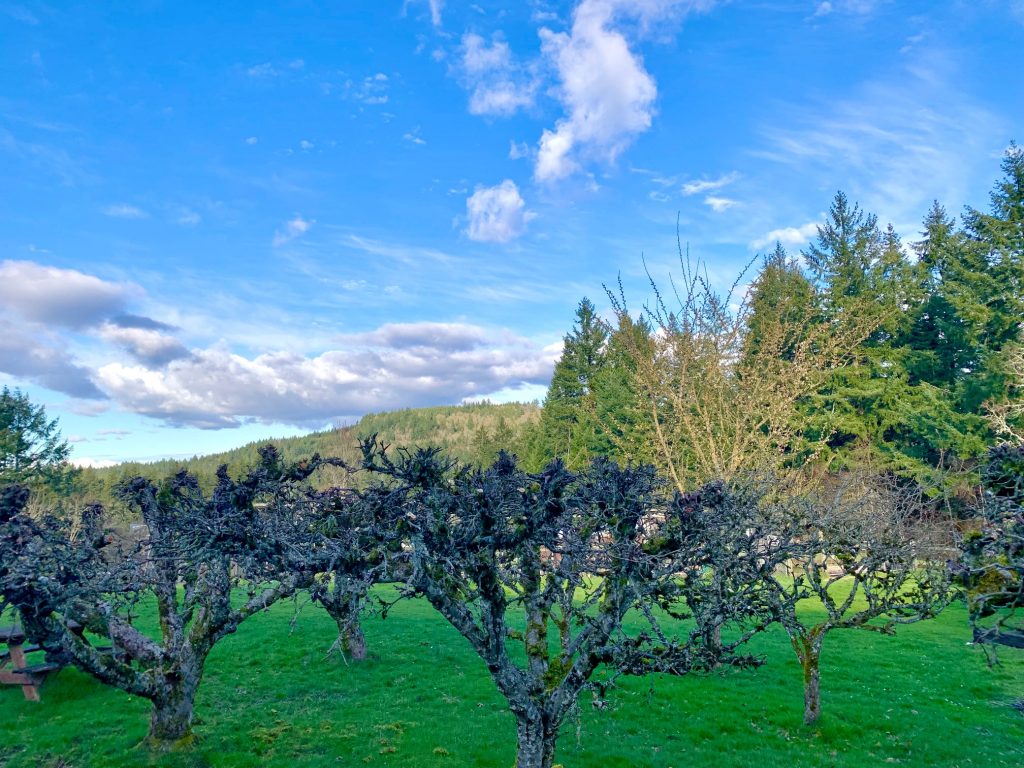 Caleb pruned our six apple and two pear trees, which is always a big job. I hardly helped this year. I got sidetracked peeling moss from the trunks and branches and killing the nasty grubs cocooned within. It was a satisfying task, as those grubs burrow into our apples and make them wormy. I’m hoping this will make a difference in the amount of apples we lose to pests this year.

I am still battling mites in the coop. I gave it a thorough cleaning and am trying a new type of bedding, along with dimotaceous earth and wood ash mixed in. The chicken that currently has mites is super mean. She is a Portland chicken that was rehomed to our farm because she was reeking havoc in her little backyard flock. She goes nose-to-nose with our puppy and our puppy cowers in fear, which is hilarious. I tried dusting her with poultry dust all by myself, and when I set her down she drew blood (through my pants) on my leg – not hilarious. I’m tempted to let the mites have her… but that’s a yucky death and I’m not that inhumane. Still, I can’t stand that chicken. 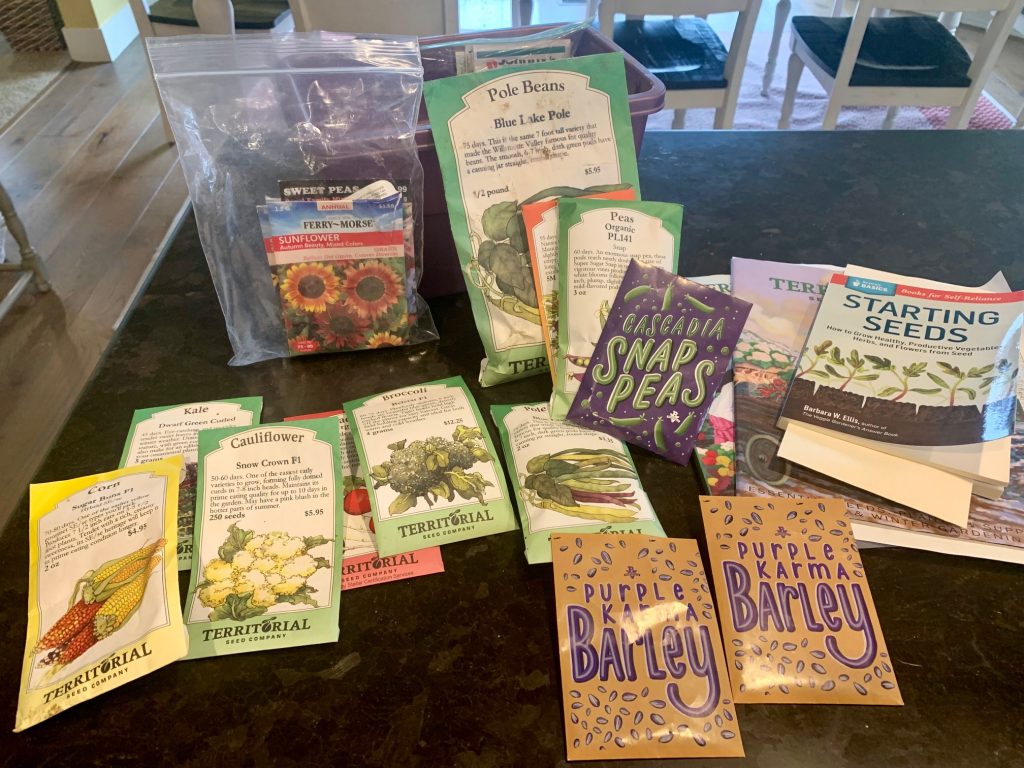 I sorted and organized old seeds and ordered my new seeds from Territorial Seed Company. It’s almost time to get peas in the ground! 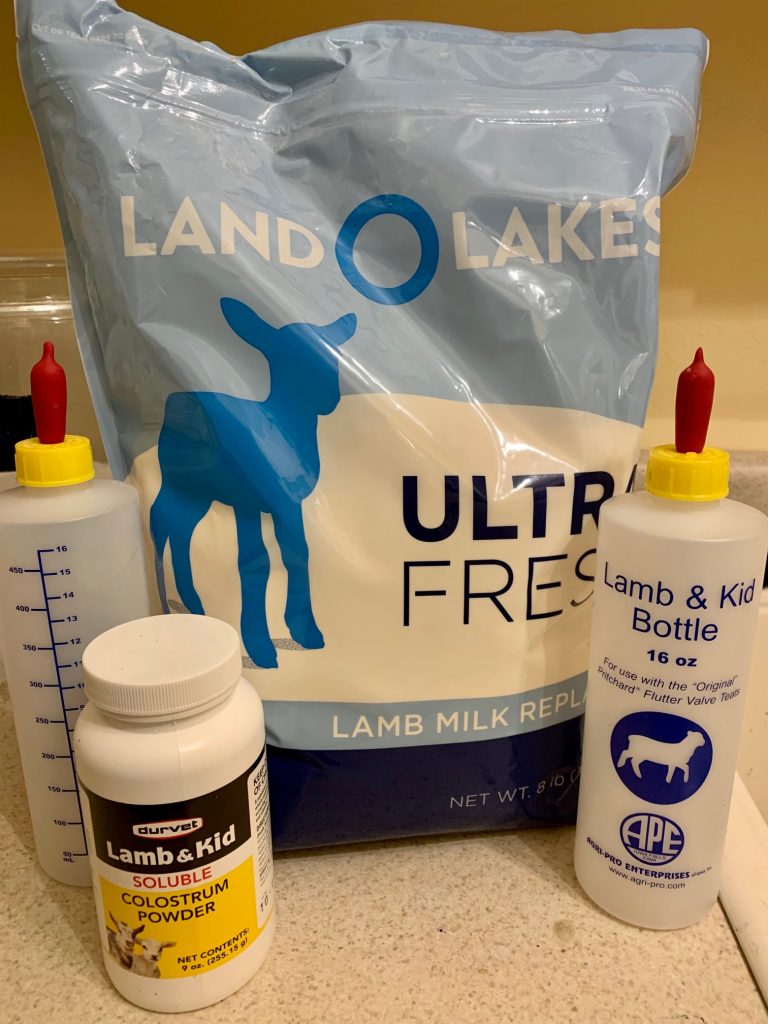 Since one of our ewes had triplets the last time she lambed (prior to coming to our farm), I bought lamb colostrum, milk-replacer, and bottles “just in case”. Good call.

February 1st, our first lambs of the year were born to first-time mama Laura while we were at our homeschool co-op. I hate missing births! But I’m also such a nervous wreck that it is kind of a blessing to come home and have them already cleaned up and nursing vigorously.

How cute are those freckles?? We named the white ram-lamb Salt and the the ewe-lamb Pepper.

Last September we put Laura and her mom Nellie in with our rams at the same time, so I was expecting Nellie to lamb immediately after Laura, especially since she looked like this: 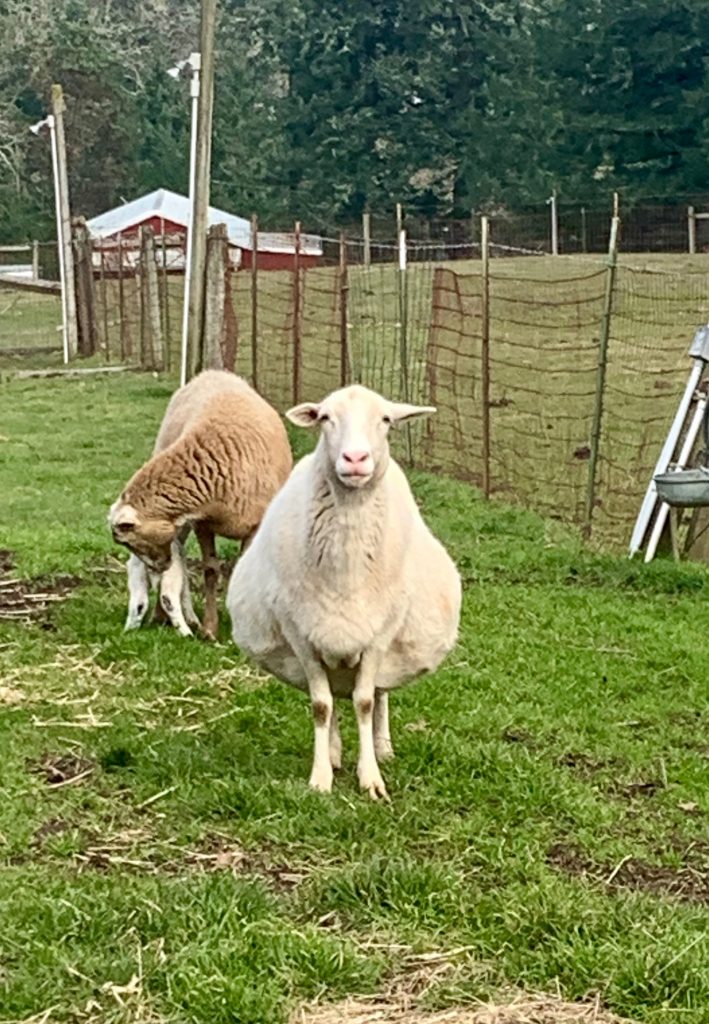 Poor old girl. Would you believe when this picture was taken, she still had 3 more weeks to go? Every pregnant lady has been there.

February 23rd, the coldest morning of the year at 23 degrees, Caleb woke me to say Nellie was lambing, but the first one was stillborn. I bundled up and ran out to the shelter in the pasture where she was cleaning up her dead baby and prodding it to stand. It was so sad. She then proceeded to give birth to two more lambs, thankfully alive. While she was cleaning them up, we were able to remove the dead one without her noticing. All seemed well, and I assumed she was finished. I had been outside for an hour and was FREEZING, so I headed inside to make breakfast. 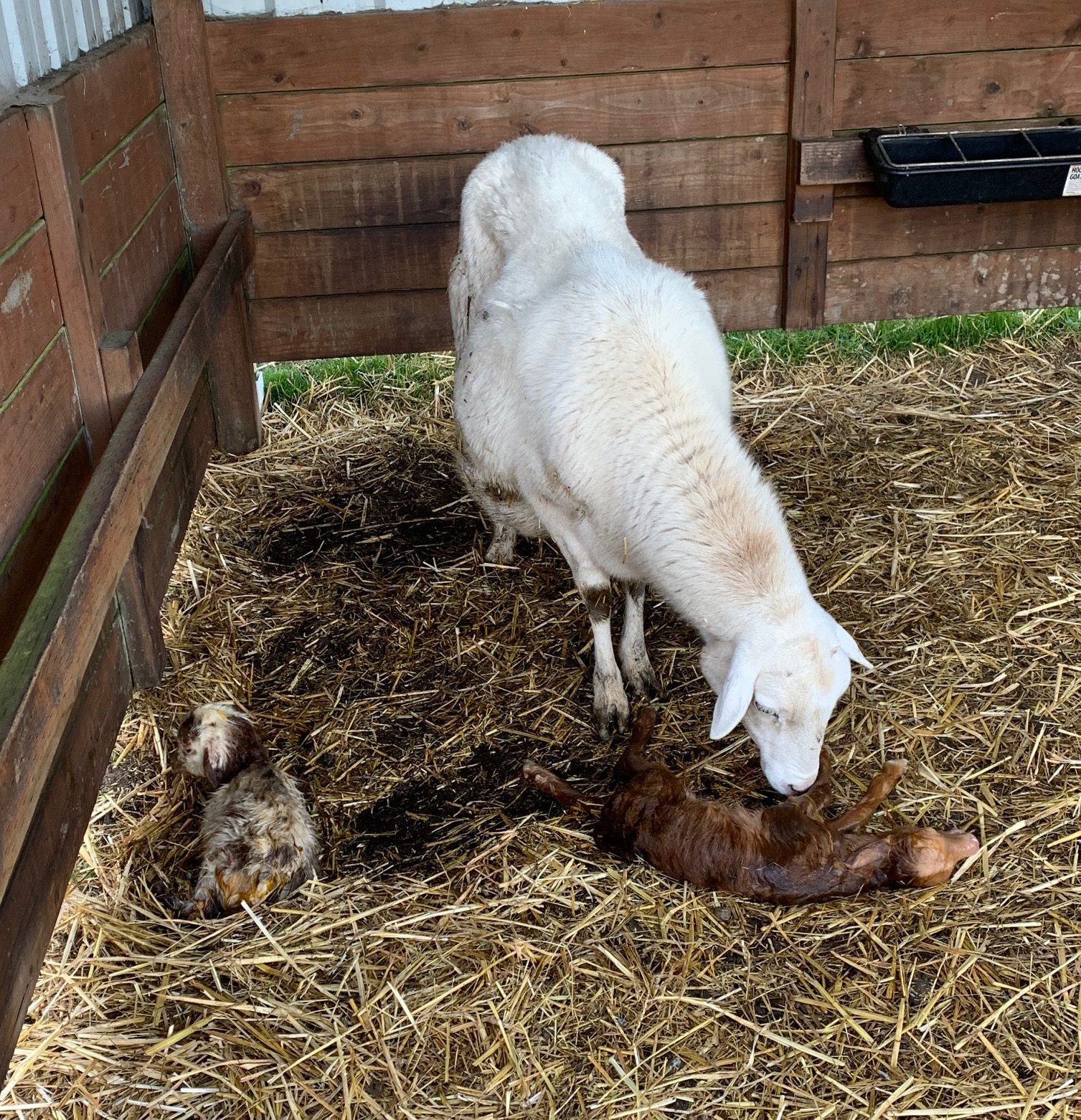 I returned about 20 minutes later to find a fourth (and final) lamb all cleaned up and nursing. No wonder Nellie was spectacularly large – she had quadruplets! 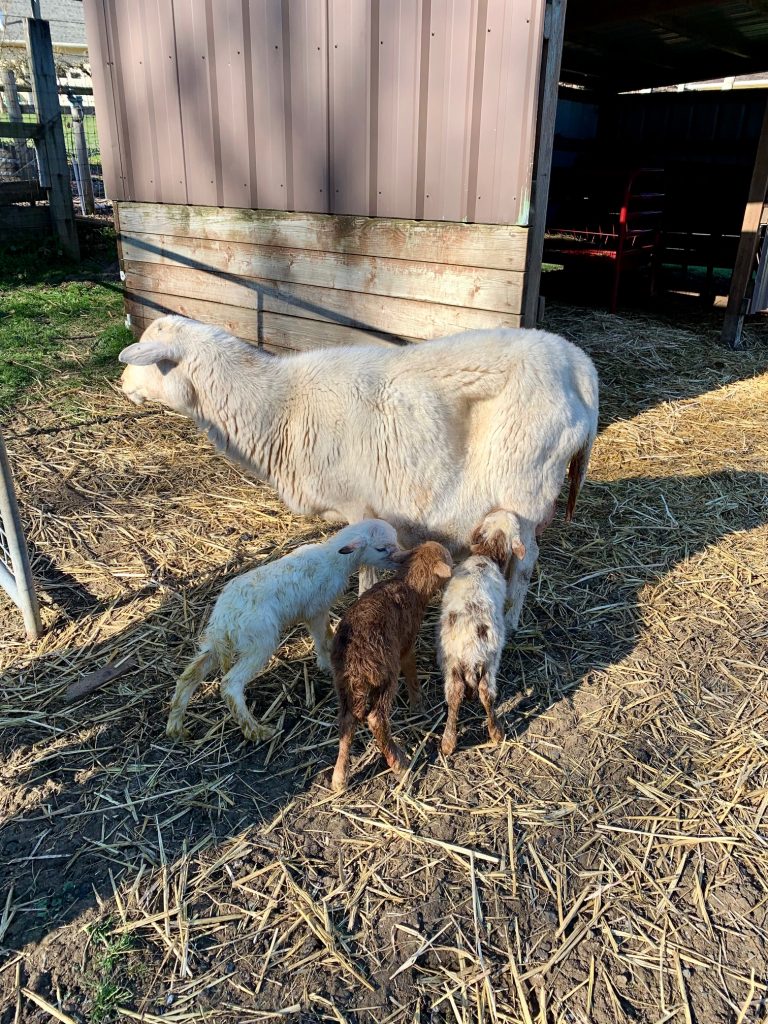 The white ewe lamb was the last one born, and she was up and nursing before her two brothers had even stood. It took almost two hours for the red boy to stand and three hours for the spotted one. Little Red soon caught up and was energetic and strong. However, we quickly realized that Little Spot was not well. He was much smaller and weaker than his siblings. Sheep only have two teats, so often a third lamb needs to be supplemented or even fully bottle-fed. He was clearly getting weaker throughout the day. In our two years as shepherds, we have never had a lamb not thrive, and so I knew this was a knowledge and experience gap for me. I read my sheep book, I read online articles, I asked questions on my homesteader’s Facebook group, and of course, got fifty different answers and opinions. 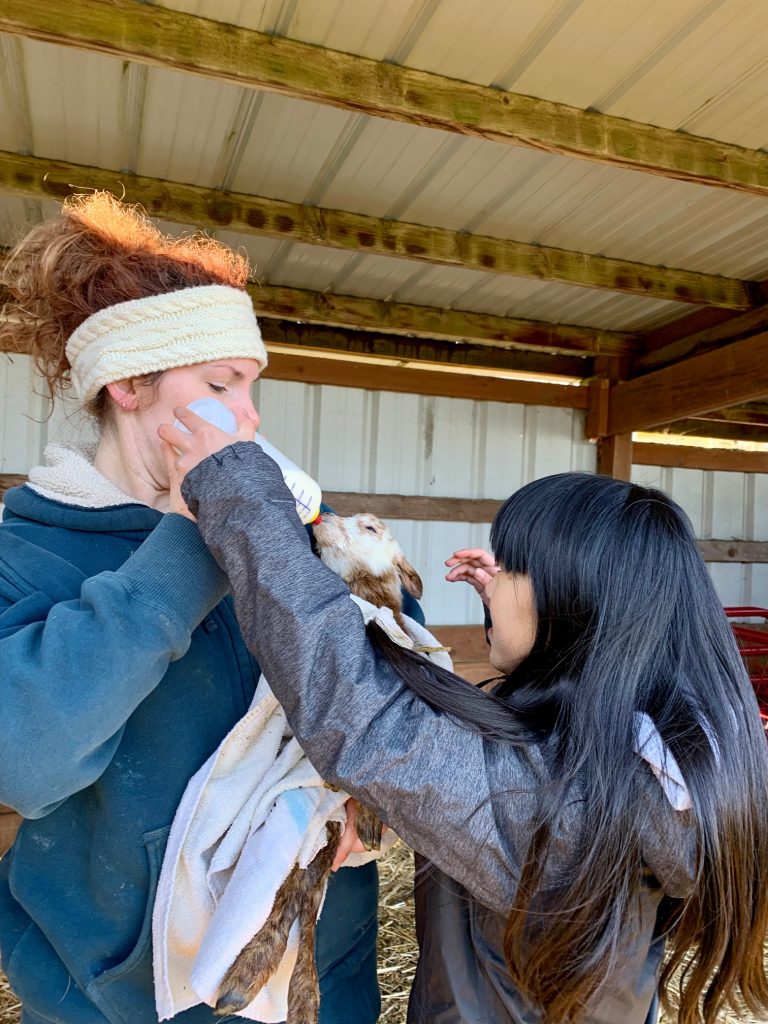 The next morning I really felt like he might die on me, so I made the non-farmy decision to take him to the vet. The vet affirmed that he was weak and scrawny but that there was nothing pathologically wrong with him. He boosted him with vitamins and gave me enough for my whole flock. He also taught me (and Charlie, my helper) how to tube feed him until he was strong enough to eat on his own. He said that tube feeding is a lifesaving skill that I needed to have if we were going to continue with sheep. I felt SO grateful to be given all of this information and hands-on training, even if it was an expensive lesson. 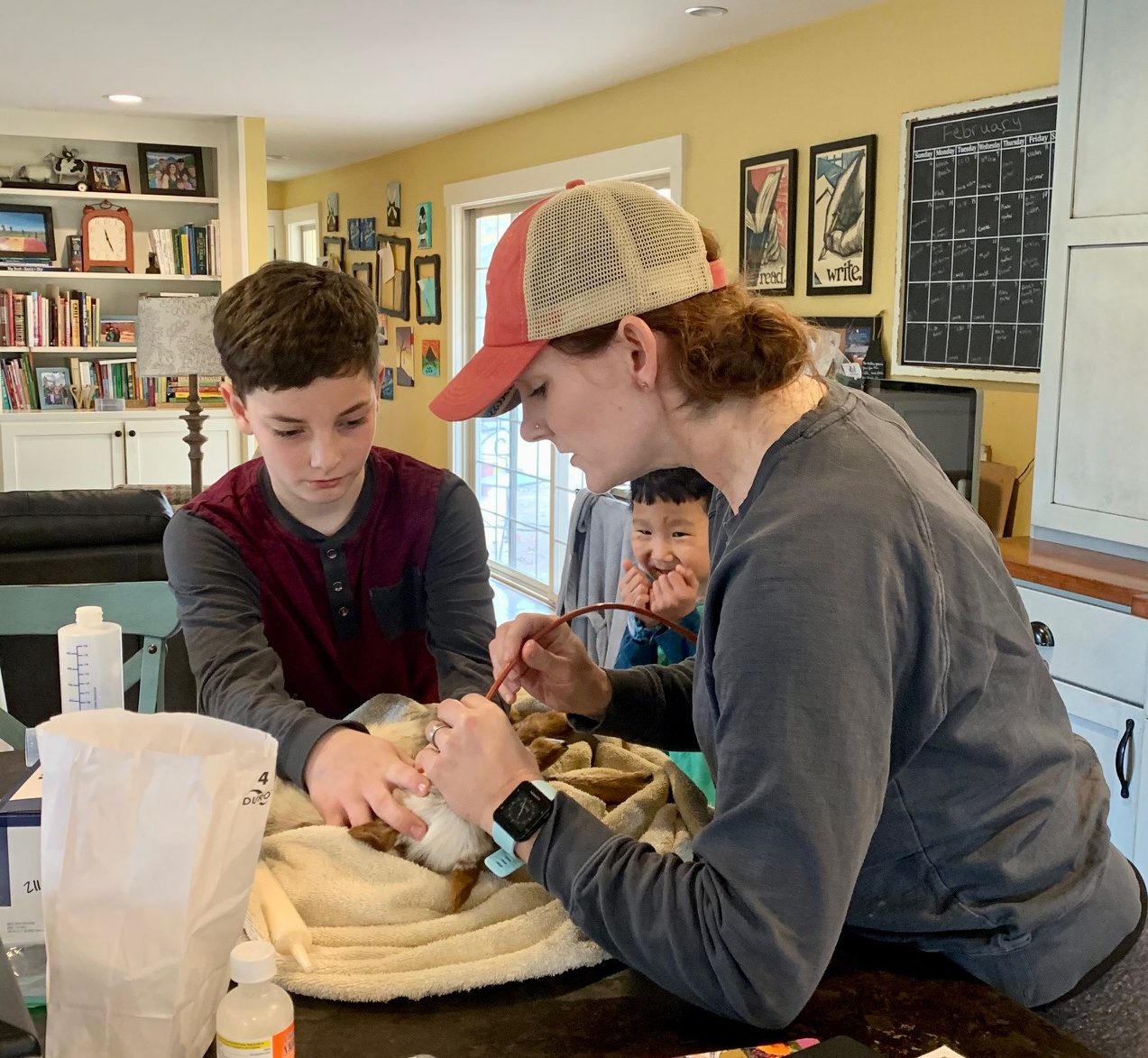 We were tube feeding him every four hours (including in the middle of the night), so he was living in our house. He was gaining strength, and so we felt comfortable naming him Lucky. It seemed to fit. But he was not getting the hang of a bottle, and after a few days he started to resent the tube being shoved down his throat every four hours. It took three of us to do it, and this did not seem like a workable solution for the foreseeable future. 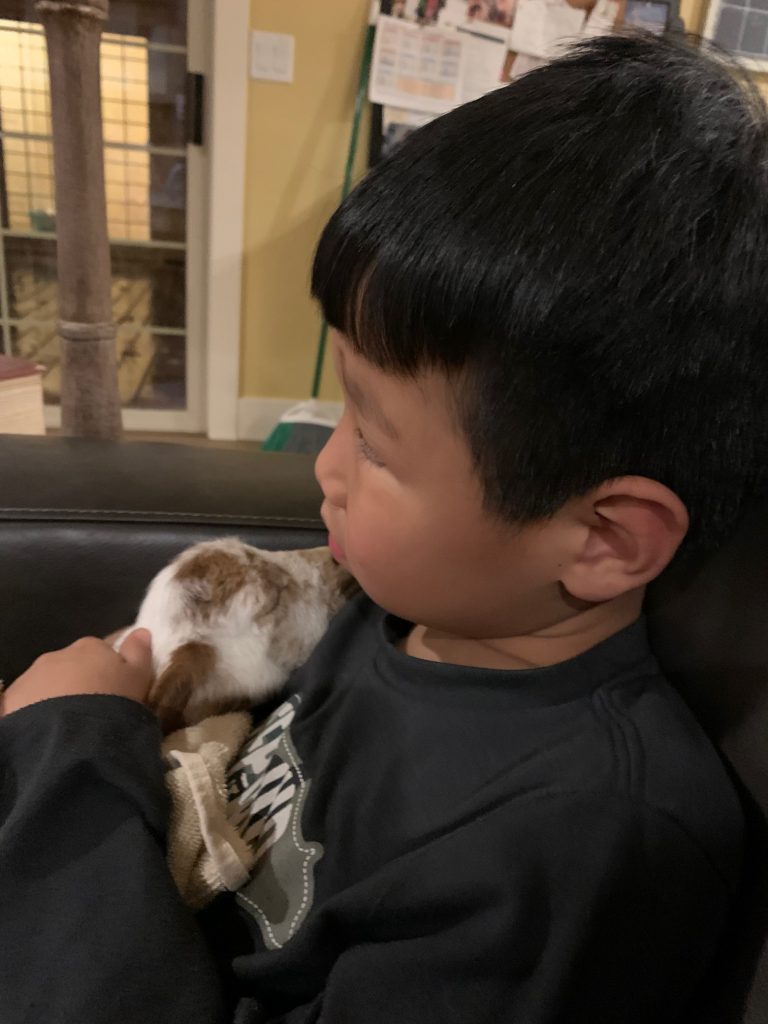 I called the vet to get his opinion on what was going on. He basically recommended that we put Lucky down “sooner rather than later”. He suspects that with mom having quads Lucky just didn’t get enough nutrients in utero and that there is something wrong with his brain. Caleb has noted that there doesn’t seem to be much going on up there, which is saying something for a sheep. As Rosie sadly noted, “Lucky might be a little un-lucky.” 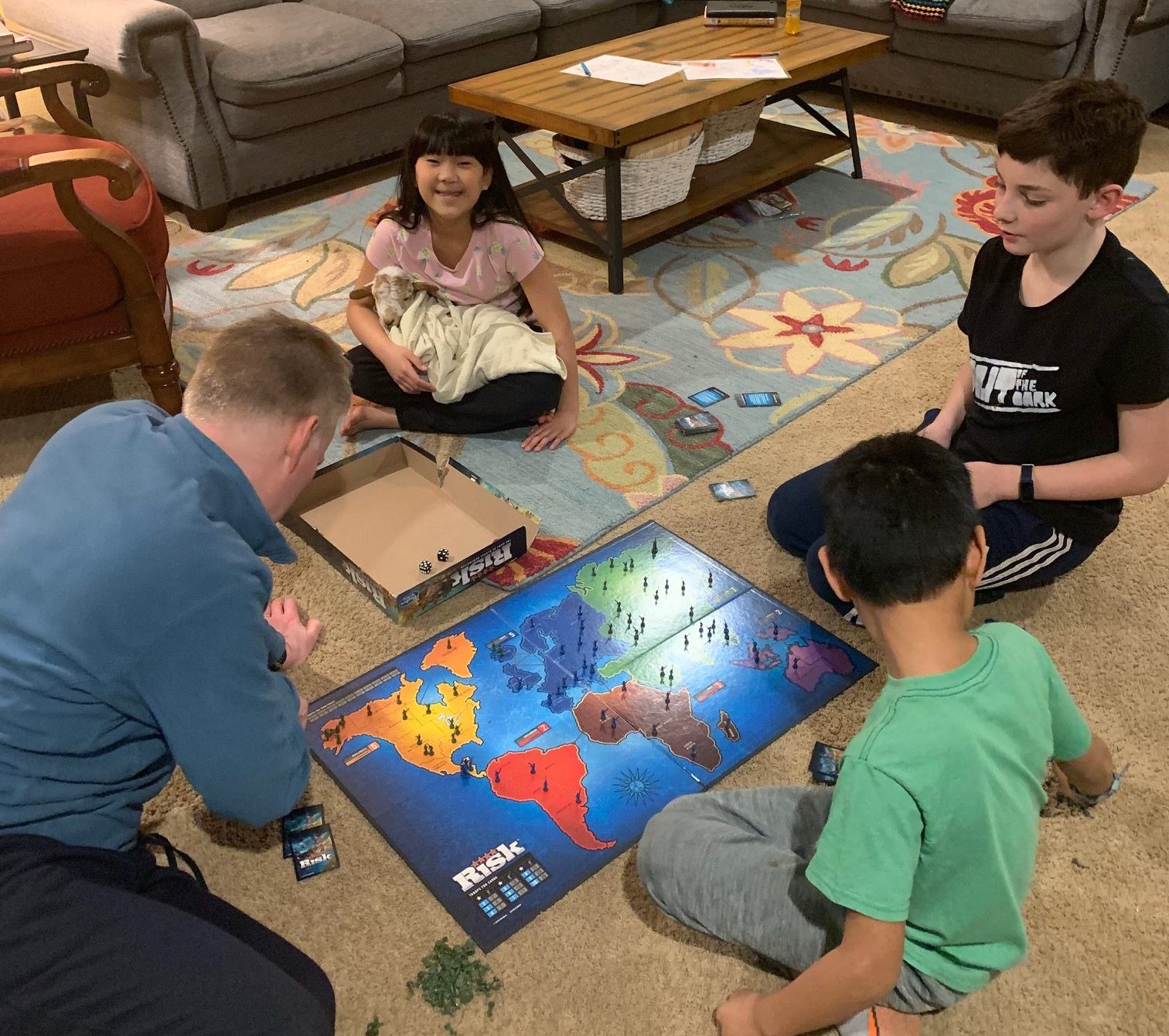 Caleb and I had some good discussions about our options. I am not overly-sentimental about our farm animals, but I just didn’t feel like putting him down, at this point anyway, was right. Caleb agreed. We do not have a large-scale farm where we are super-pressed for time or profit. We can embrace this challenge, learn from it, and hopefully save his little life. We are sure trying. 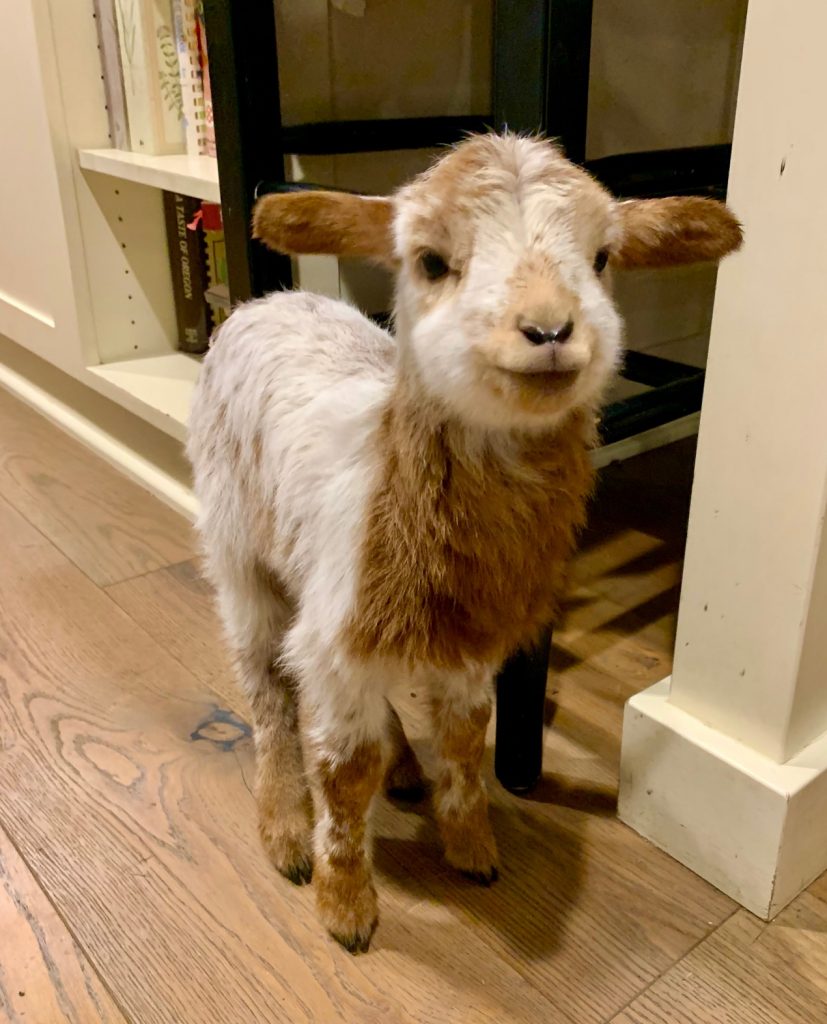 I did more research and gave him a deadline to get the hang of a bottle. The deadline has passed. We haven’t tube fed in several days, and while he is not really sucking on the bottle, he does let me squeeze the milk into his mouth and is intaking a healthy amount. He is out with mom and his siblings now full time and seems like a normal, if excessively dim, little lamb out there. He even tries to nurse on mom and I think he gets a little milk. He is now two weeks old, and I am feeding him 3-4 times per day (not at night anymore, thankfully!) I don’t know what Lucky’s future holds. We are prepared to let him go if that’s what is needed and take good care of him in the meantime. 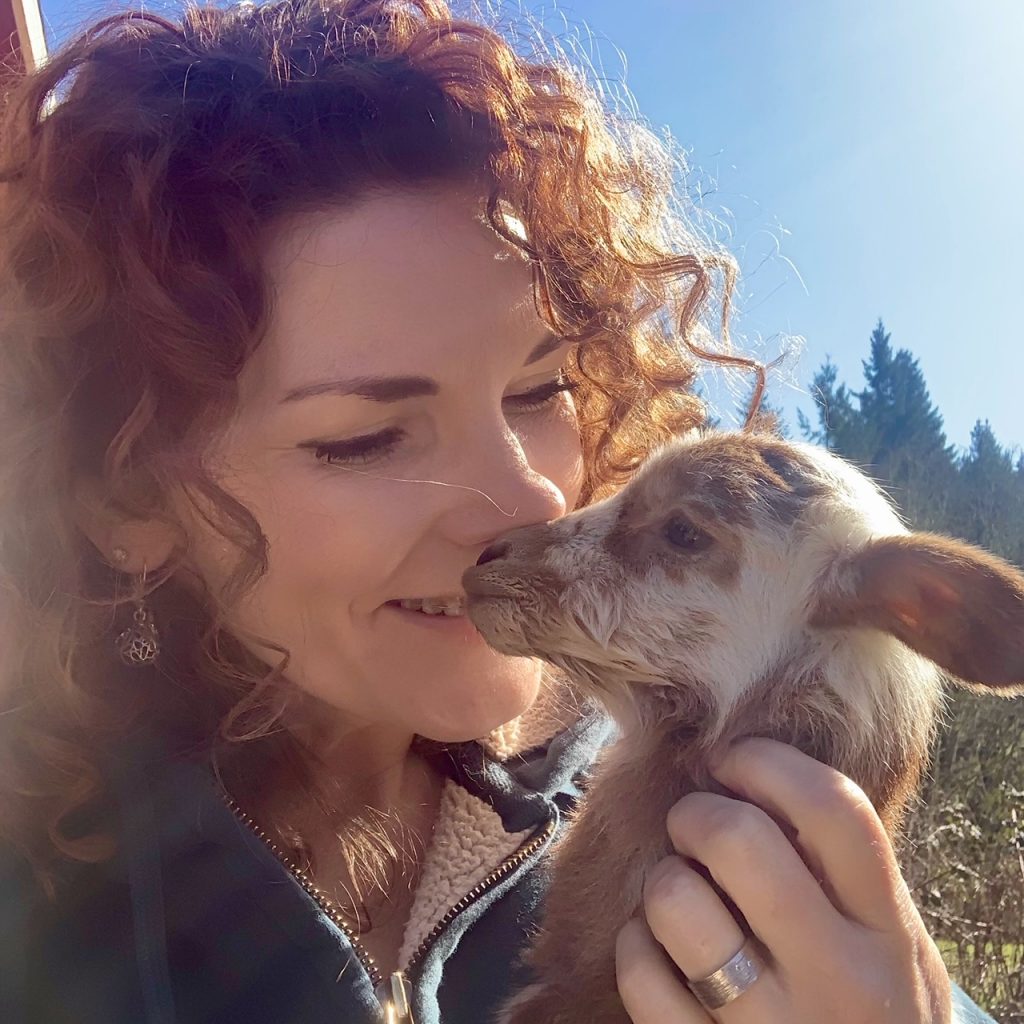 The world is always a hurting and hard place, but I’m feeling it extra right now. It has blessed and changed me to care for this little lamb in our little corner of the world. It reminds me of the ways God cares for me. It reminds me that goodness and gentleness still exist. It reminds me that the right things often don’t make sense from a merely utilitarian perspective. The world would say that the money and time expended on a sickly little lamb are not worth it. But I would say that the most precious, valuable things in life do not fit tidily into an input versus output formula. There is so much more to consider. Lucky is proof of that.