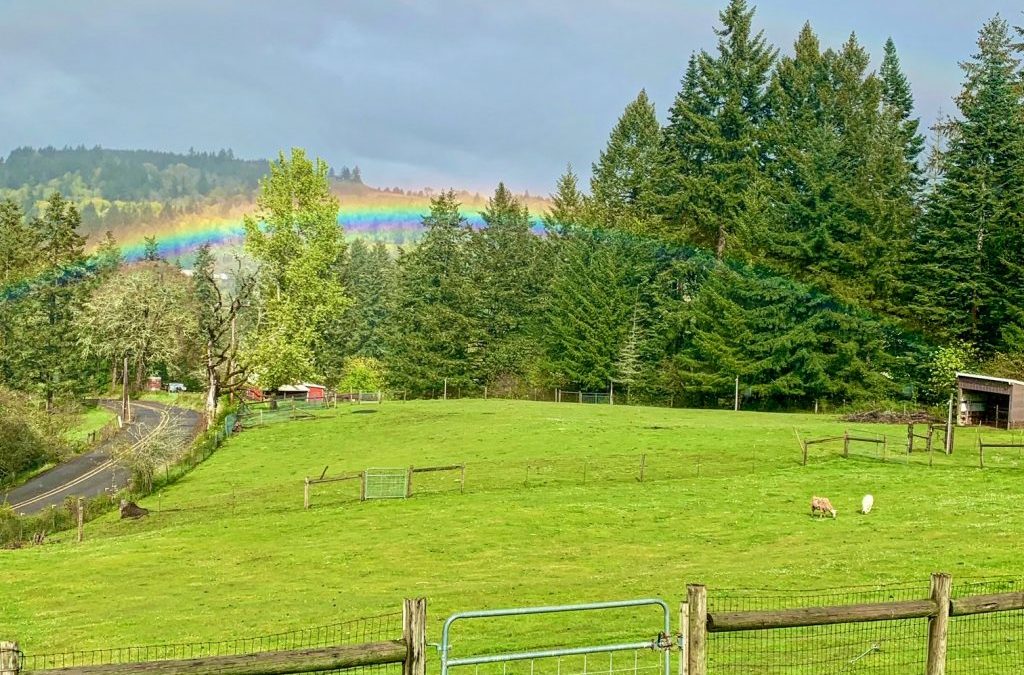 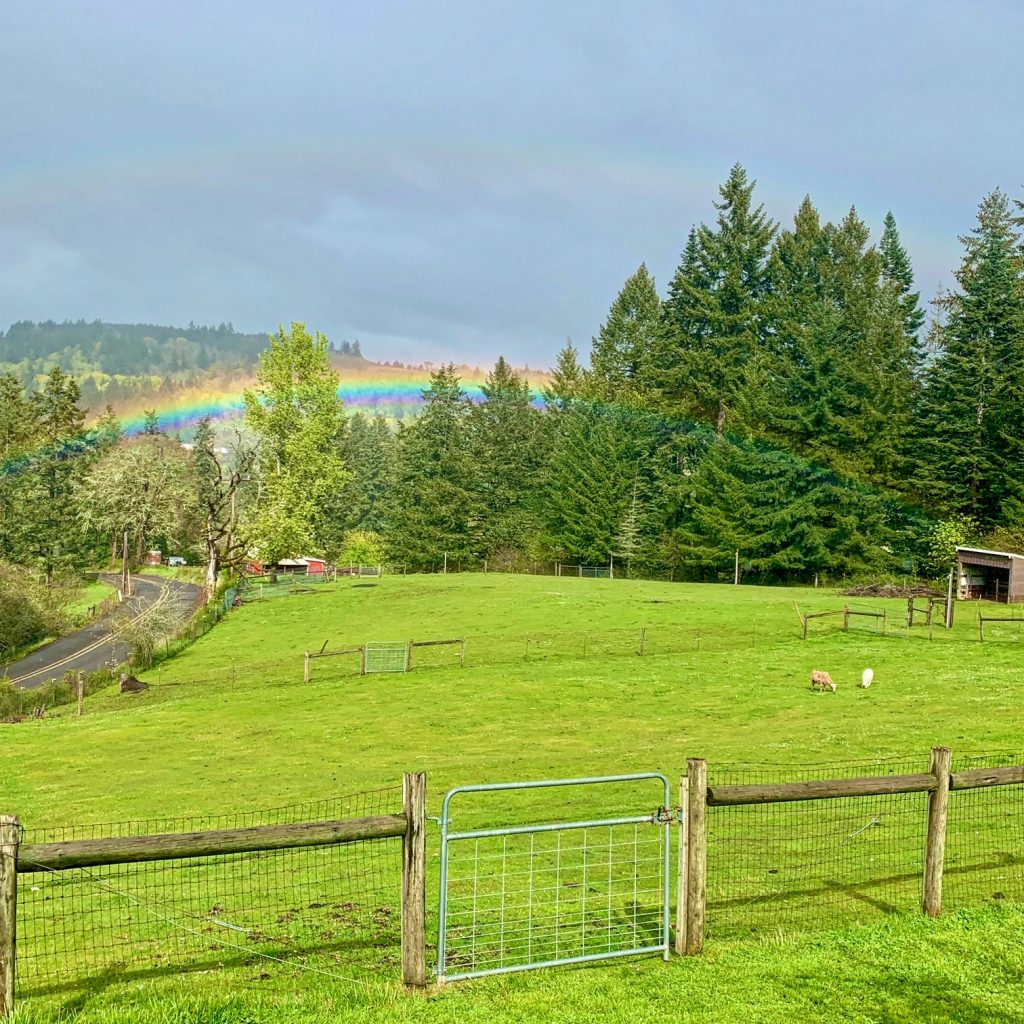 Nothing is so beautiful as Spring-
When weeds, in wheels, shoot long and lovely and lush;
Thrush’s eggs look little low heavens, and thrush
Through the echoing timber does so rinse and wring
The ear, it strikes like lightnings to hear him sing;
The glassy peartree leaves and blooms, they brush
The descending blue; that blue is all in a rush
With richness; the racing lambs to have fair their fling.
~ From Spring, by Gerard Manley Hopkins ~

April was so consuming that I am just now, eight days into May, having a chance to sit down and reflect. Non-farm life was extremely full: birthdays, Easter, track, piano recitals, youth symphony concert, prom, mock trial, Faces of History, Memory Master quizzing, end-of-year homeschool co-op celebration, weekend trip to Sonoma… it was crazy. You know what else has been crazy? The weather. We had our wettest April on record, which for Oregon is saying something. We also had snow on April 13th. 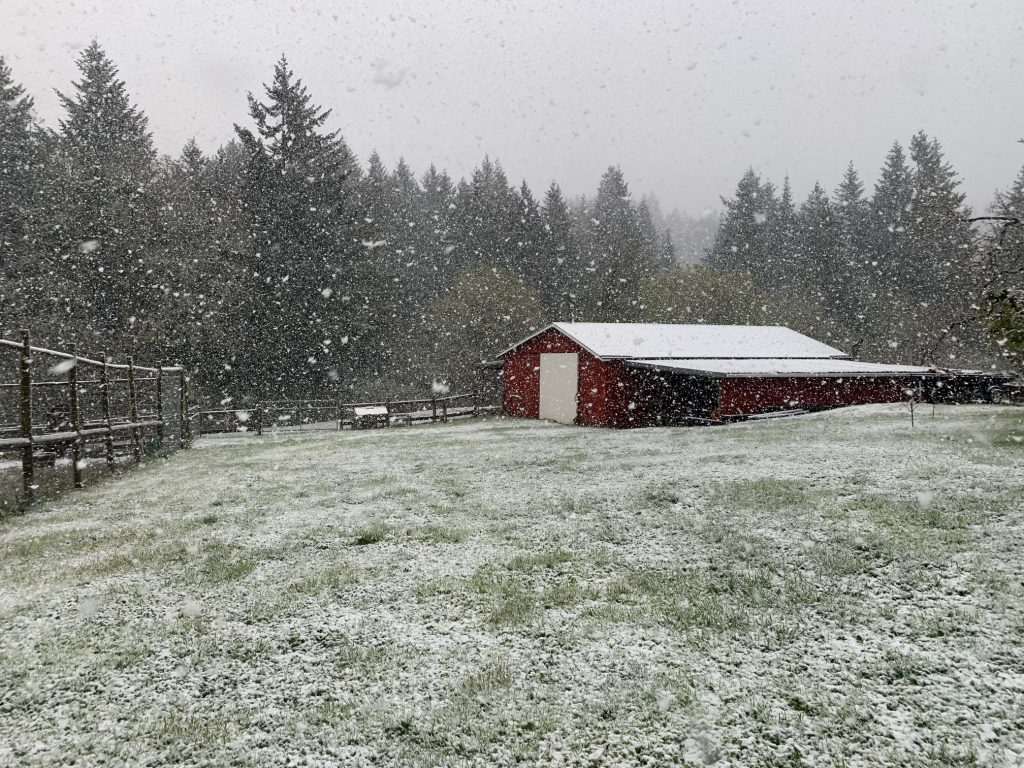 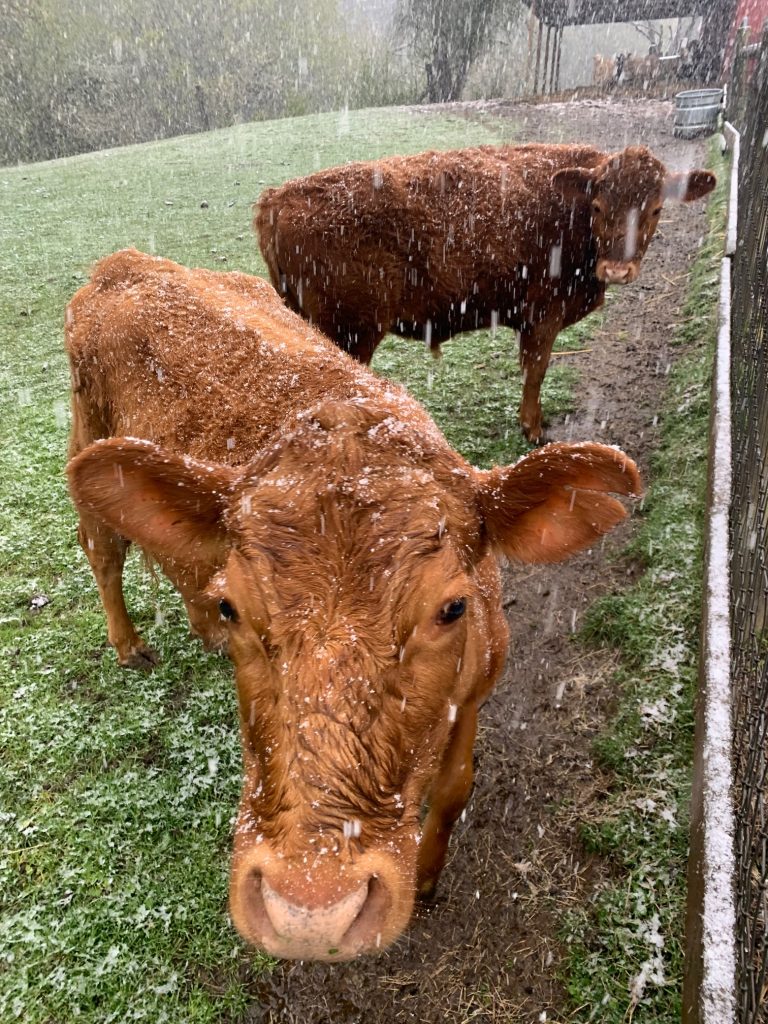 The cows were not amused. Nor was I.

Aside from my spirit feeling bogged down by the rain and the cold and the gray, it has just been really difficult to find dry moments to get out and do what needs to be done on the property and especially in the garden. The soil is so water-logged and cold that there is no point planting anything at this point, nor have we had the opportunity to get the garden prepped for planting: weeding, bringing in soil and compost, spreading bark chips for the paths, all remain on our to-do list. The pasture is not growing at its usual vigorous spring-rate because there has been so little sun. Our cherry, pear, and apple trees blossomed, but I saw hardly any pollinators out in the driving wind and rain, so I’m concerned our crop will be small. We’re still building fires and still not planting flowers. If you think you might be detecting some whininess, you are correct. It has bummed me out. 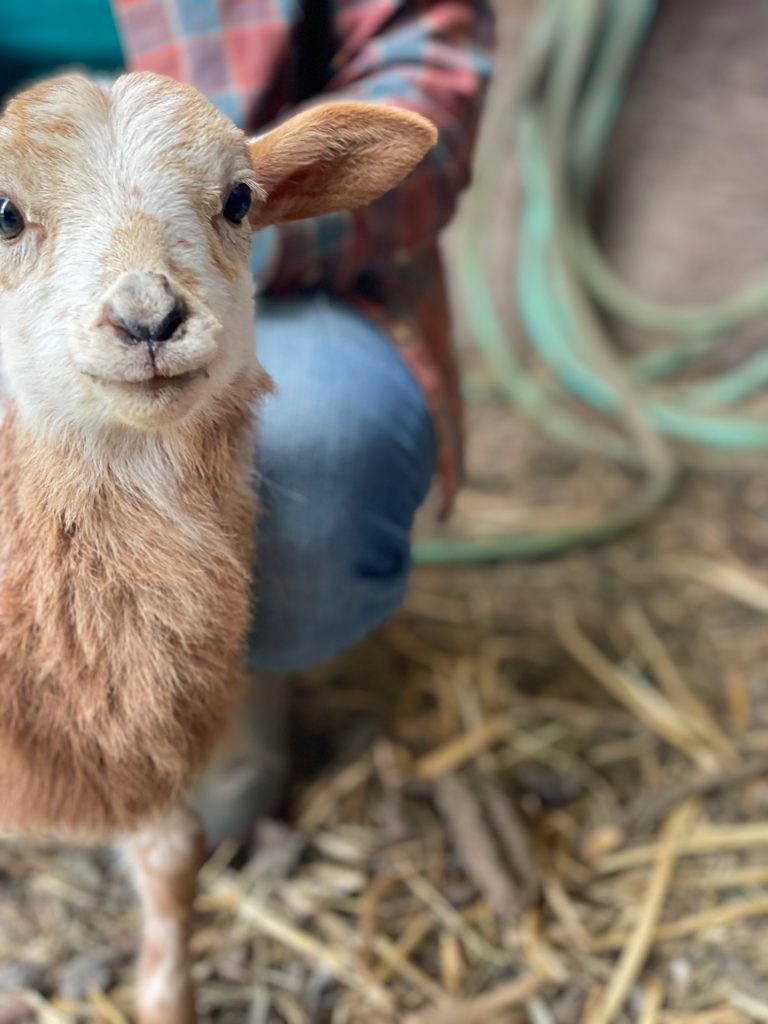 Photo by my friend Lauren

I think one reason I have put off writing this post is that I wasn’t looking forward to sharing this story. As April began, things with Lucky-Lamb began deteriorating in a couple of ways. First, he developed a huge growth on his neck that continued to grow. We attempted to drain it and got a little bit out but not enough to make a difference in its size. We weren’t sure how to proceed, but another vet visit was not an option. And then one morning I looked at Lucky and saw that his front legs were completely bowed. It literally happened overnight. From my internet research I diagnosed him with Rickets, a vitamin D deficiency that can occur in rapidly growing lambs (and children). And Lucky was growing well! He had finally gotten the hang of his bottle and would greedily guzzle twelve ounces at a time. After a few days of pondering, we gave him a shot of Vitamin D which can help remedy rickets.

Photo by my friend Lauren

The next morning, on April 12th, when Lucky Lamb was seven weeks old, I went out to find him standing in the pasture by himself, crying incessantly. This was completely out-of-the-normal. I gave him his morning bottle and set him down. He wouldn’t move. I brought him over to the mamas and he stumbled over to the wrong one, who irritably shooed him away. I thought his legs weren’t working and thought maybe the rickets were progressing. I knew we would likely need to put him down, but I had to rush off to the final day of our homeschool co-op and had to leave him all day.

That afternoon I came home to a heartbreaking scene. He was wandering around the pasture in circles, far from all the other lambs, crying. He was walking into fences. It was then that I realized he was completely blind. It wasn’t that he couldn’t walk that morning, it was that he couldn’t see. I went into the pasture and called to him and he followed my voice. I think he was so relieved to finally have a contact point. I scooped him up and brought him inside. Wrapping him in a towel, I gathered the kids and explained that Lucky was going to need to be put down right away. For the kids, it was very unexpected. We were all crying. Rosie held him on her lap on the couch until Caleb got home from work. Lucky began having seizures and I really thought he might die in her arms. He didn’t though, and Caleb ended his suffering quickly. It was a very hard night. 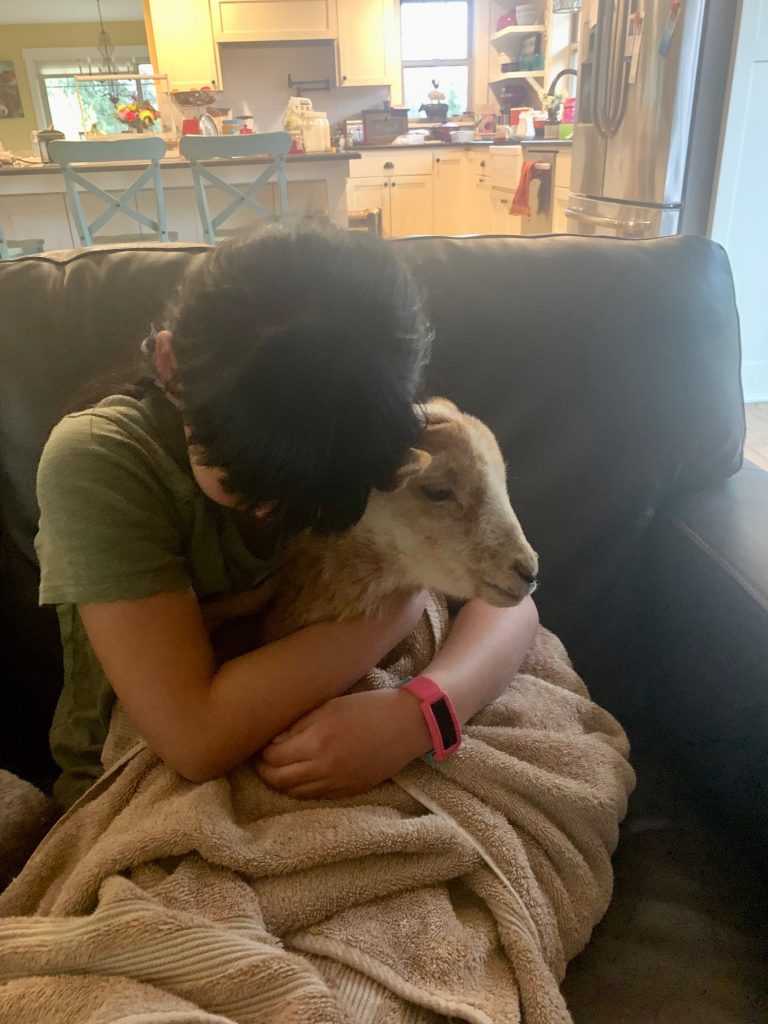 So what happened to Lucky? At two days old, the vet said he thought Lucky had something wrong with his brain – something neurological – and recommended that we put him down “sooner rather than later”. I think his brain just couldn’t support his growth and his bodily systems anymore. Knowing how it ended, do I wish I had followed the vet’s advice? I have thought about that a lot. I’ve decided I would not have had peace putting him down at that point. I would have always wondered if we could have done something to save him. I now know that we did absolutely everything possible and that Lucky was un-saveable. Would I follow the vet’s advice next time? I think I probably would. Some things though you just have to experience for yourself. They are hard lessons, but they are yours. And this one is certainly mine.

A bright spot in April was Chick Day. No matter how many times we bring home chicks, they never cease to delight. And new life, even if its sojourn on our farm will be relatively brief, is always a beautiful thing. This year, we got 18 Cornish Cross meat chickens, 10 layers, and 5 turkey poults. 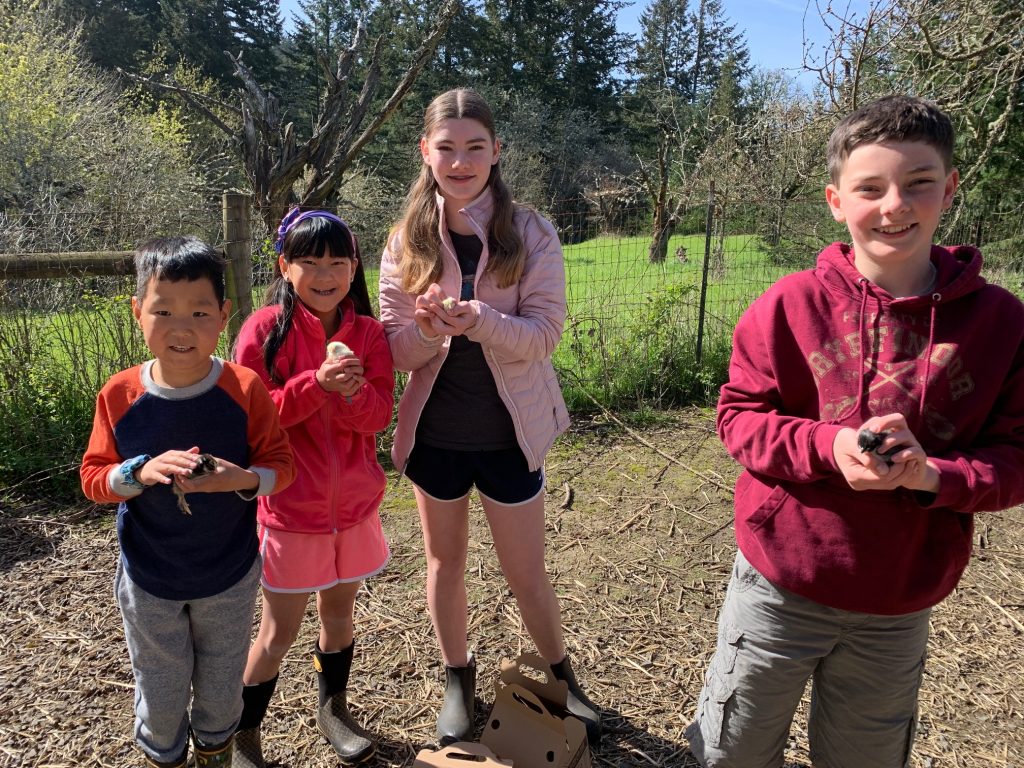 We set them up in a stall in the barn as usual, but soon realized that our one heat lamp was not going to suffice with the unusually cold temperatures we were experiencing, and so we added a second. They will stay there until they have feathered out and are ready to move out to the big outdoor meat-bird coop or the chicken tractor. 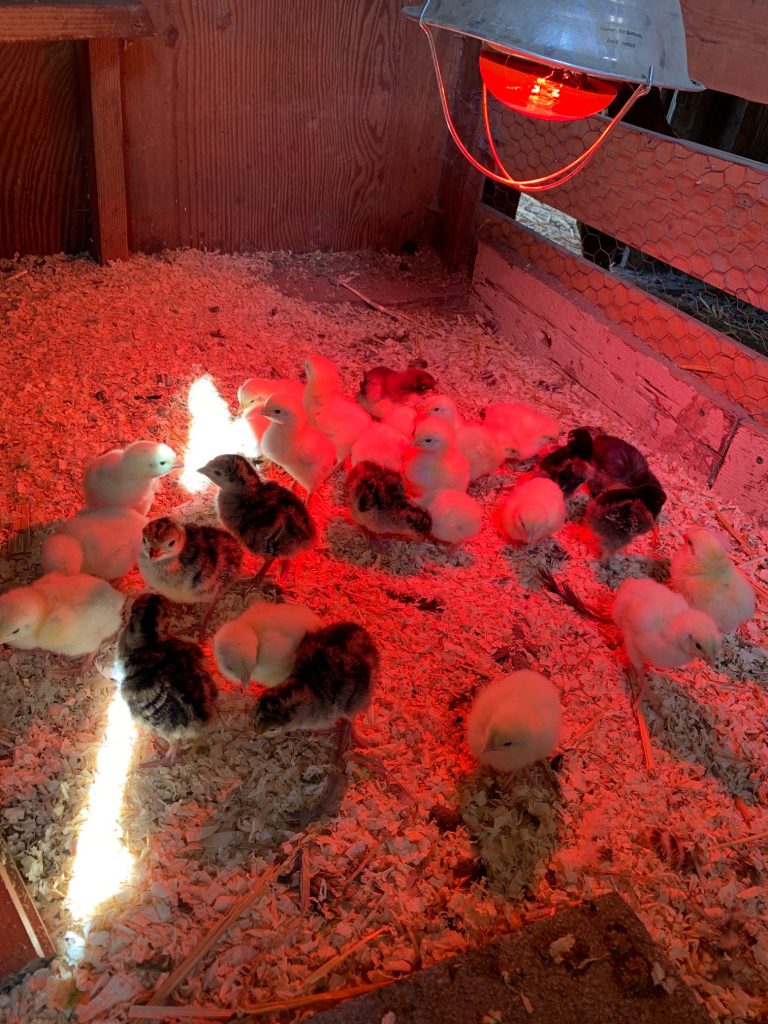 I know it’s hard to believe, but the yellow meat chicks are only cute for about two hours and then they start getting really big and gross. I promise it’s true. If they’re going to grow to eight pounds in eight weeks their fluffy-adorableness can’t last long. The turkeys and pullets, however, remain cute to this day.

I started seeds indoors for the first time in March but they quickly outgrew their tiny plastic cells and needed to be transplanted. Elisabeth and I got the tomatoes repotted and put back in my sunny dining room window where they are thriving. 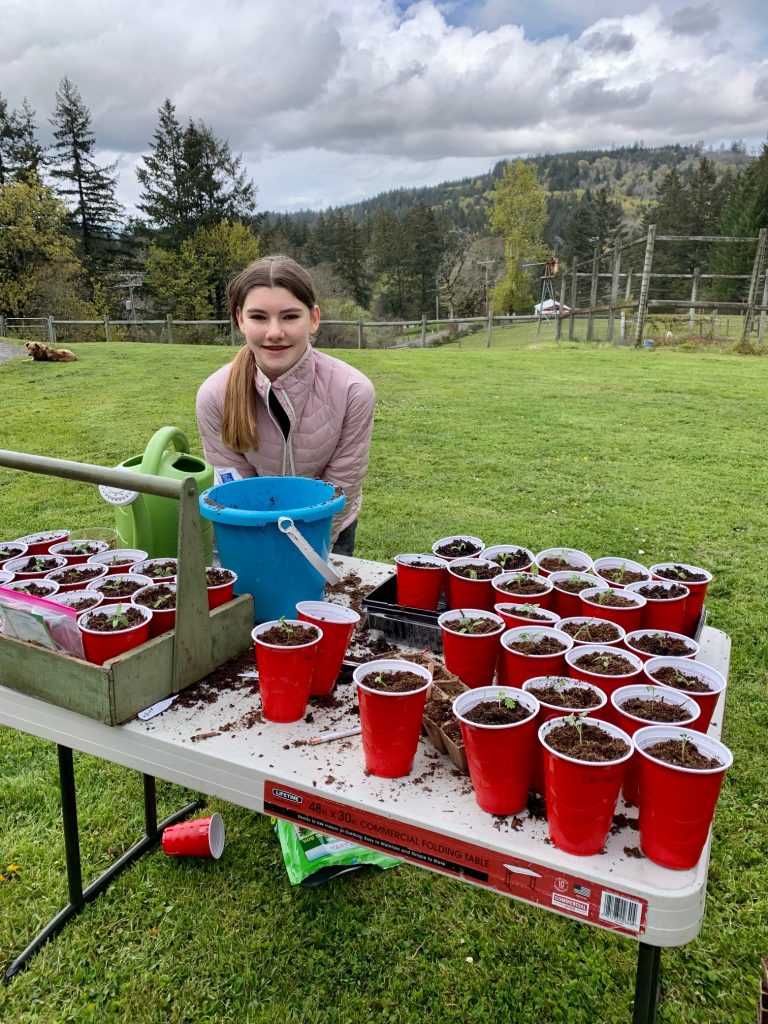 Caleb hung up my new grow light in the basement for all the squirrely squash vines. 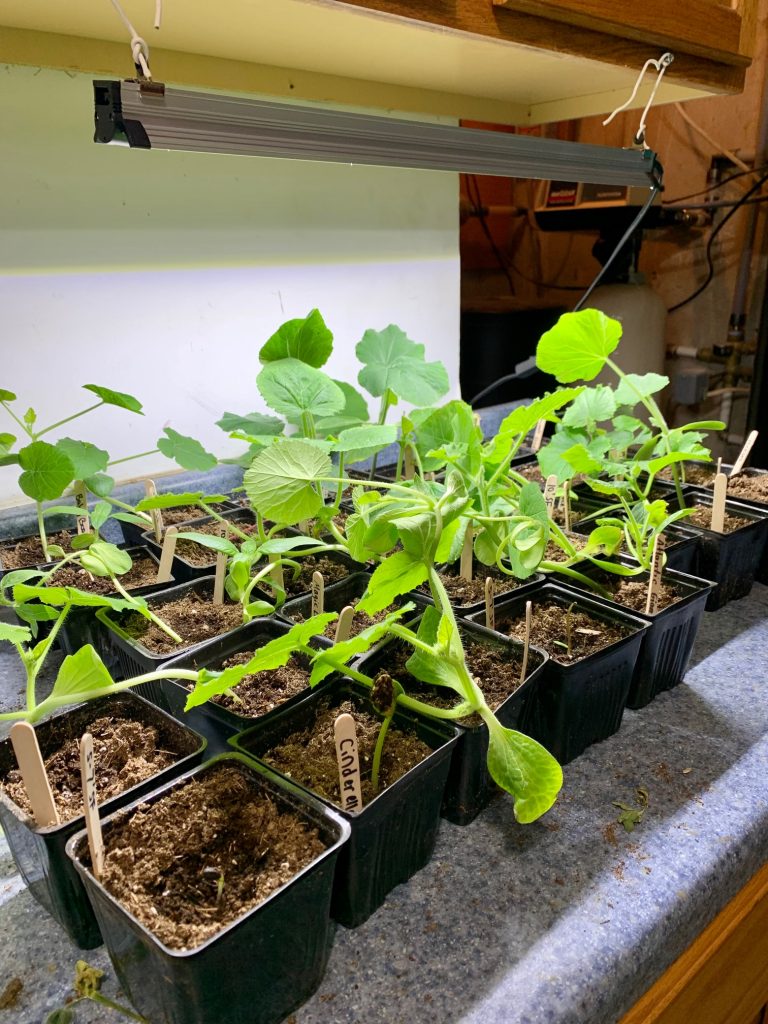 Now, for some warm sun to heat and dry out the soil, and time to prep the garden and get them planted in the ground. Low temperatures are supposed to be in the mid-30s for several days, so it won’t be happening this week. Maybe next week…

April was a month when the disappointing farm things we dealt with were fully eclipsed by the joy and richness of “real life”. It was sweet of God to bring us so much goodness with our kids and their activities and accomplishments. And of course celebrating Christ’s resurrection reminds me of the purpose of everything we do and the ultimate victorious ending of our story. 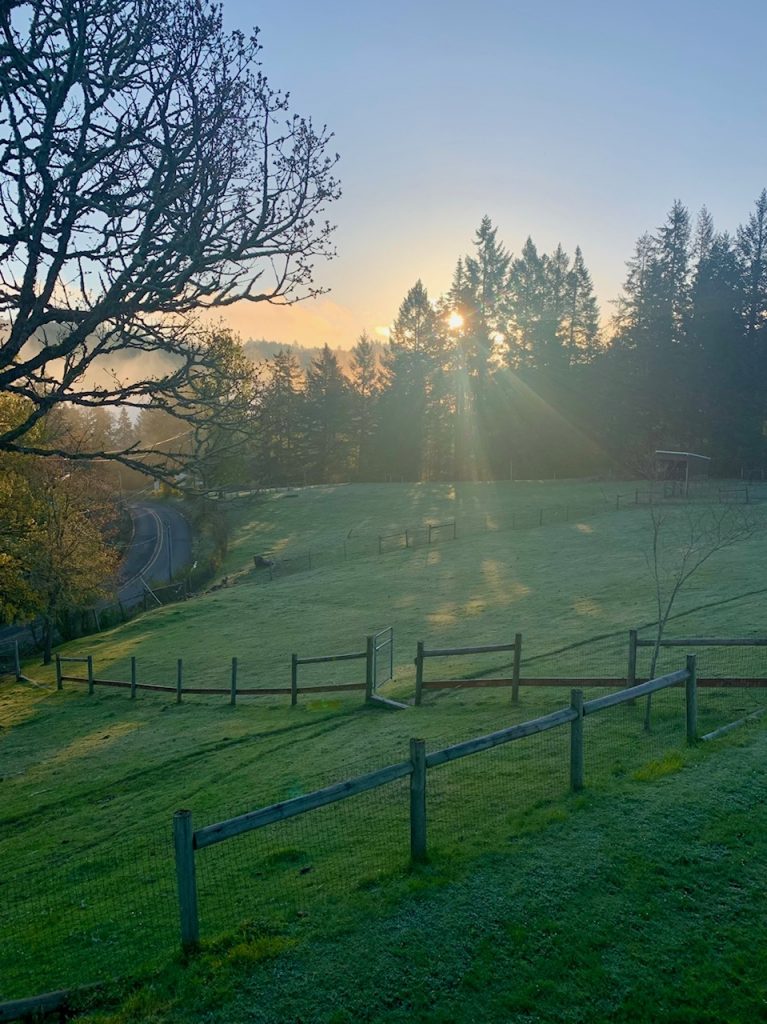 After several days of oppressive rain, Good Friday dawned radiantly. I thought to myself, “Would this splendor have been better saved for Easter morning?” But I decided it was perfect right where it was, a reminder and assurance that Sunday was coming.

What is all this juice and all this joy?
A strain of the earth’s sweet being in the beginning
In Eden garden. – Have, get, before it cloy,
Before it cloud, Christ, lord, and sour with sinning.
Innocent mind and Mayday in girl and boy,
Most, O maid’s child, thy choice and worthy the winning.~
From Spring, by Gerard Manley Hopkins